Dollar Index at 100 again: will it bounce or break?

The Dollar Index is back at 100, a pivotal level. What happens here could have important implications for the major FX pairs, especially the EUR/USD, at least in the short-term outlook anyway.

The Dollar Index is back at 100, a pivotal level. What happens here could have important implications for the major FX pairs, especially the EUR/USD, at least in the short-term outlook anyway. The latter has been inching higher for the past 5 weeks now. It has managed to climb from a low of about 1.0340 at the start of the year to a high so far of 1.0770.  The recovery has been supported mainly by a falling dollar, which has been hit by profit-taking after its upsurge in the aftermath of Trump’s election victory back in November. But is the dollar about to resume its rally once again?

Well, there is no real fundamental impetus for it to do so as the Fed is going to wait for a few months before potentially raising interest rates again. But equally, there is no real fundamental reason for it to significantly weaken further, as all the other major central banks remain pretty much dovish across the board. Overall, however, the Fed continues to be the only major central bank which is hawkish. This makes us fundamentally bullish on the dollar, but the question remains whether it is time for it to resume its rally or not.

This is where technical analysis comes handy. So far, we haven’t seen any distinct technical reversal signals to suggest the dollar is about to start trending higher again. If anything, the GBP/USD appears like it may have created a major bottom at 1.20, which is dollar bearish. But what about the EUR/USD? Well, this pair is bang in the middle of nowhere currently. However it does appear slightly overbought and there is no real fundamental story behind its recovery. Consequently, the EUR/USD pair may fall back and this could underpin the Dollar Index, especially as the latter is currently testing the all-important 100 level again.

Why is the 100 level so important? Well, this psychologically-important level had been strong resistance throughout 2015, repeatedly halting the rally that had started back in July 2014. But in 2016 the DXY finally cleared this important resistance level before making a high around 103.55. At the start of this year, the DXY attempted to move north of 2016’s high, but it was rejected immediately and that triggered a profit-taking response by market participants.

So, what happens here around the 100 handle will be very important for the short-term outlook of the dollar. The dollar bears would argue that after a two-year consolidation, the breakout at the end of 2016 should have led to significant gains for the dollar, and that the fact that it hasn’t, it may indicate that the bullish days could be over. The bulls on the other hand would argue that this may well be a healthy pullback in what still is a very strong uptrend for the dollar. After all, the 200-day moving average is pointing higher and remains comfortably below the current price. Furthermore, even if the 100 levels breaks down it doesn’t necessarily mean the upward trend is over. Indeed, the long-term technical outlook would still remain intact until and unless it forms a major lower low. The last significant low was at 91.90 – in other words, miles away. Indeed, to put things into perspective, the dollar has not even retraced to the shallow 38.2% Fibonacci level against that low. Still, should the dollar bulls fail to defend the 100 level again, this could trigger further dollar selling in the short-term outlook. 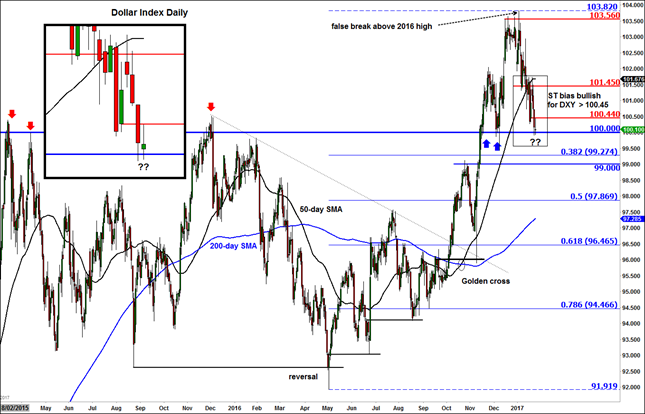