On the US-China trade front, Lighthizer stated that it was “too early to predict” the outcome of trade talks and emphasized that any agreement must be “enforceable.” He also noted that more purchases of US goods alone would not be enough; his exact words were "Don’t go for the soybean solution. This is our one chance.” Instead, he wants to see structural changes to the way China conducts international business, especially around intellectual property and technology transfers. While these comments seem to suggest a deal is far from completion, it’s worth noting that President Trump’s recent comments have been far more conciliatory, and he’s the one who will ultimately decide whether to sign a deal with China.

Meanwhile, the second day of Fed Chairman Powell’s semi-annual Congressional testimony mostly reiterated the central bank’s “patience and flexibility” mantra toward monetary policy. The most interesting nugget from today’s testimony (so far) was that the Fed is “close to agreeing on a plan” to end its balance sheet drawdown. This development, which was hinted at in last month’s monetary policy statement, underscores that the Fed is closely monitoring the stock market’s reaction to its comments (“The Powell Put”) and is slightly dovish at the margin.

For it’s part, the US dollar index is bouncing from its 61.8% Fibonacci retracement (a level we highlighted last week). The near-term momentum favors the bears after yesterday’s big drop, and a break below today’s low later this week could expose the 78.6% Fibonacci retracement near 95.60 or previous support around 95.20 next. 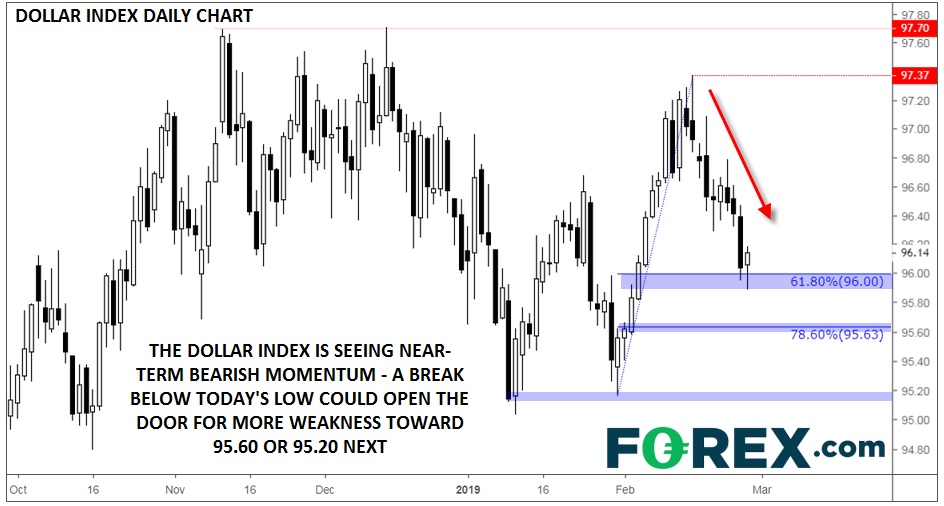