Dollar index still in a downtrend, despite this week’s rally

For the relatively small number of our readers that are still at their desks, we wanted to start by wishing you a great Good Friday and Easter holiday ahead, though today’s market conditions are hardly "good" for most active traders. Most major stock and bond markets are closed leading to lackluster, low volatility trading conditions in the foreign exchange markets.

The world’s reserve currency is strengthening modestly against all of its major rivals except for the loonie, but it’s important to keep in mind that on a normal day, the moves we’re seeing would be considered little more than noise. Taking a look at the daily chart of the US dollar index reveals that the greenback remains within a textbook downtrend (lower lows and lower highs) off the early December peak, while a longer-term weekly chart (not shown) would reveal a broad sideways range between 93.00 and 100.00.

Despite this week’s oversold bounce, the medium-term downtrend remains healthy: the RSI indicator is still trapped in a bearish range below the 60 level, and though the daily MACD indicator is showing signs of turning higher, it’s still well below the "0" level, showing overall bearish momentum. As long as the dollar index holds below its previous highs in the 98.50 zone (roughly equivalent to the 1.13-14 area in EUR/USD, the technical downtrend will remain intact.

From a fundamental perspective, next week’s big economic releases will certainly have a big impact on the buck’s short-term outlook. The most critical report of the week will no doubt be the monthly Non-Farm Payrolls report, which will be closely watched both for evidence of overall job creation and signs of growing demand-pull inflation from wages. Beyond that releas, traders will also look to sink their teeth into Wednesday’s ADP jobs report and the monthly batch of Chinese PMI readings in Friday’s Asian session.

Next week will very likely be more exciting than this week for markets, but unless the dollar index can break its trend of lower lows and lower highs, medium-term buck bears will retain the upper hand. 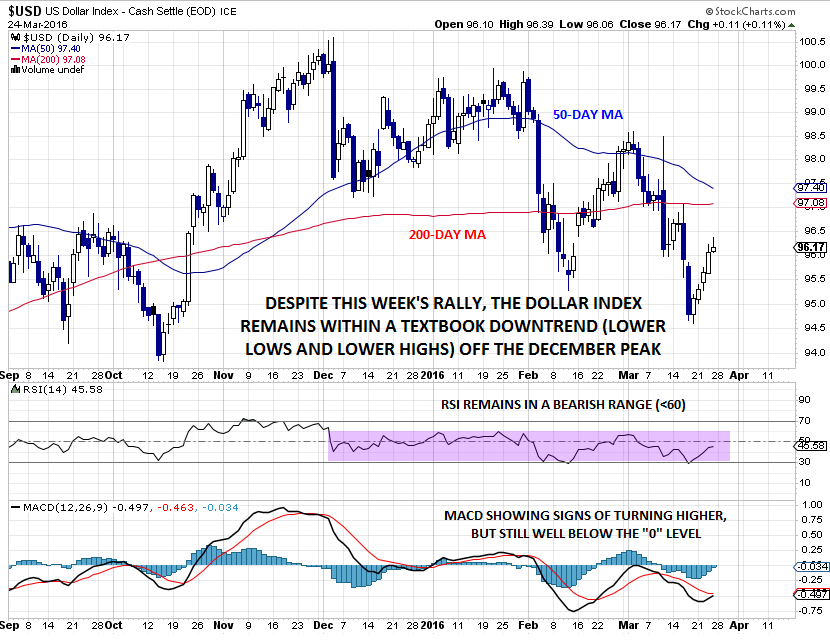