It is going to be a busy day for the dollar, with a couple of market-moving economic pointers coming up ahead of the Federal Reserve’s rate decision later on. The official non-farm payrolls report is due on Friday.

It is going to be a busy day for the dollar, with a couple of market-moving economic pointers coming up ahead of the Federal Reserve’s rate decision later on. The official non-farm payrolls report is due on Friday. Ahead of these data releases, the US currency has been trading mixed in recent days, falling against the likes of the euro and pound, but strengthening versus the Japanese yen and also the commodity currencies. As a result, the Dollar Index (DXY) has been going absolutely nowhere in the past eight trading days or so: the DXY’s trading range has been less than 50 pips for most of the time. But will we see some much-needed volatility and direction this week?

As mentioned, it will be a busy day in the US with ADP private sector payrolls report, ISM non-manufacturing PMI and the FOMC’s policy statement all to look forward to today, while the official jobs report is due out on Friday. The ADP report is expected to show 178,000 net jobs were created in April, while the headline ISM PMI is seen expanding to 56.1 from 55.2 previously. If the actual numbers show any significant deviations from these expectations then we may see a corresponding sharp move in the dollar as market participants try to make a calculated guess about Friday’s jobs report based on these indicators. The Fed, though, is almost certain not to make a change in interest rates today. Still, the market will be looking for clues about the potential trajectory of rate rises going forward, and the Fed’s plans, if any, about how it will shrink its massive balance sheet.

Ahead of these potentially market moving events, the Dollar Index, as mentioned, has been stuck in a tight range. Given this recent volatility compression, one should be expecting to see range expansion this week as market participants respond to fundamental news. Consequently, the direction of the next move will be very important. The key levels to watch are at 98.80 on the downside and 93.30 on the upside. A break and hold above 99.30 would at the very least target 100 as this is where that gap from last week will be closed. But if the DXY were to break lower instead, then we may see a drop towards the next key support at 97.55 or even the long-term 61.8% Fibonacci level at 96.45 next.

One way or the other, the dollar looks set to move sharply this week. In the long-term, the direction of the US currency will be dependent on not only the outlook for interest rates in the US, but also in key regions such as the Eurozone, UK and Japan. As things stand, it is only in the US where interest rates are already on the rise. Given this divergence, I remain fundamentally bullish on the dollar, especially against currencies where the central bank is still dovish. But technically – for now, at least – I am neutral given the recent bearish developments on the chart, including the break below the bullish trend line and the flattening of the 200-day moving average. 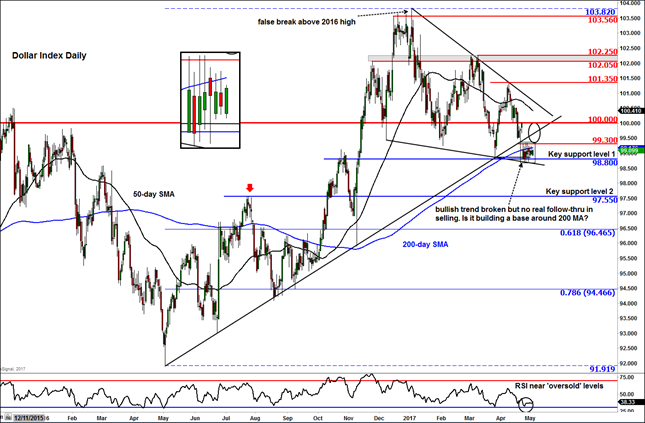