Sustained US dollar strength on the back of Federal Reserve hawkishness and Trump-driven market optimism has prompted major currency moves in the past few weeks. Among the most prominent of these moves have been a EUR/USD breakdown below the key 1.0500 level and an epic USD/JPY surge above multiple resistance levels in the past month. Another major move that has just occurred as a result of US dollar strength has been a critical breakdown for AUD/USD.

December 19, 2016 – Sustained US dollar strength on the back of Federal Reserve hawkishness and Trump-driven market optimism has prompted major currency moves in the past few weeks. Among the most prominent of these moves have been a EUR/USD breakdown below the key 1.0500 level and an epic USD/JPY surge above multiple resistance levels in the past month. Another major move that has just occurred as a result of US dollar strength has been a critical breakdown for AUD/USD.

This breakdown below the key 0.7300 level occurs after a plunge last week that saw AUD/USD slide rapidly from 0.7500-area resistance, which was also around the 200-day moving average.

Much of this slide for AUD/USD can be attributed to an extended boost for the US dollar after the Fed’s increasingly hawkish “dot-plot” outlook for 2017 was revealed last week. That showed Fed officials now expecting three further rate hikes in 2017 instead of the previous expectations for two hikes.

On the Australian side, the Reserve Bank of Australia (RBA) decided two weeks ago to keep its cash rate unchanged at the record low of 1.50%, instead of cutting interest rates further. This expected policy steadiness was credited to global economic growth, an improving labor market, steadier China conditions, and rising inflation. While this less-dovish stance by the RBA gave a modest boost to the Australian dollar, the recent strength of the US dollar has dominated currency movement. Adding onto the USD-driven pressure on AUD/USD, heavily-depressed gold and commodity prices have also weighed on the currency pair.

Having broken down below the key 0.7300 level, AUD/USD has reached a critical juncture. If the currency pair remains below 0.7300, the outlook continues to be strongly bearish, especially in light of the expected acceleration of Fed policy tightening. In this event, the next major downside target is around the 0.7150 support level, last hit in May, followed by the 0.7000 psychological level. 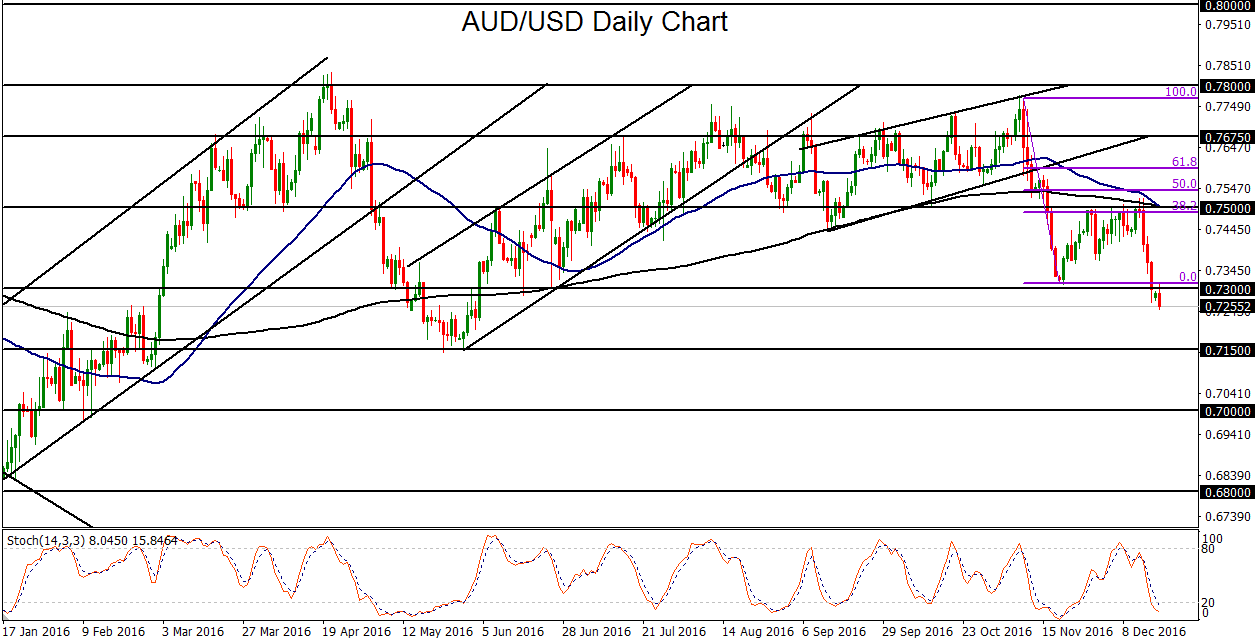