Despite a better-than-expected June GDP reading for Canada released on Wednesday, two key factors have led to a drop in the Canadian dollar and an extension of USD/CAD’s recovery within the past two weeks. These two factors have been strong recent support for the US dollar and a pronounced pullback in crude oil prices.

Despite a better-than-expected June GDP reading for Canada released on Wednesday, two key factors have led to a drop in the Canadian dollar and an extension of USD/CAD’s recovery within the past two weeks. These two factors have been strong recent support for the US dollar and a pronounced pullback in crude oil prices.

The primary driver of US dollar support has been the market’s perception that the Federal Reserve has become more hawkish and that the probability of a rate hike this year, possibly even as soon as late September, has risen. Relatively hawkish comments from both Federal Reserve Chair Janet Yellen and Fed Vice Chair Stanley Fischer last week have largely driven this sentiment. Coming up on Friday, the potentially pivotal US non-farm payrolls report will be released. Given that the labor market is a key component of the Fed’s policy decisions, Friday’s outcome could be critical in impacting the Fed’s September decision. If the data exceeds expectations again, as it has in the previous two months, the probability of a September rate hike will likely increase and the US dollar should continue to strengthen.

On the Canadian dollar side of the currency pair, Canada’s June GDP reading on Wednesday came out at 0.6% against the prior forecast of 0.4%. Despite this relatively positive release, however, a sharp drop in crude oil prices shortly after dragged down the oil-linked Canadian dollar, further boosting USD/CAD. A pullback in oil prices has been in place for around a week-and-a-half, but Wednesday’s release of crude oil inventory data for last week showed a significantly larger-than-expected build in crude stocks of 2.3 million barrels against prior forecasts of around 1 million barrels. This data helped to highlight once again the persistent oversupply situation that continues to drag down oil prices, prompting a sharp plunge for both the West Texas Intermediate and Brent Crude benchmarks on Wednesday.

The combination of a stronger US dollar and falling oil prices has boosted USD/CAD to a new three-week high from its 1.2800-area support base less than two weeks ago. In the process of this rise, the currency pair has climbed back above the key 1.3000 psychological level and reached up to hit the bottom border of a large wedge chart pattern below which price broke down in early August. In the event that the US dollar remains supported by a positive jobs report on Friday and crude oil remains plagued by oversupply concerns, USD/CAD could see a significant further extension of its recovery. Currently, major resistance lies immediately above at the key 1.3200 level, where the 200-day moving average is also presently situated. With any sustained breakout above that resistance, the next major upside targets are at the 1.3400 and then 1.3600 resistance levels. 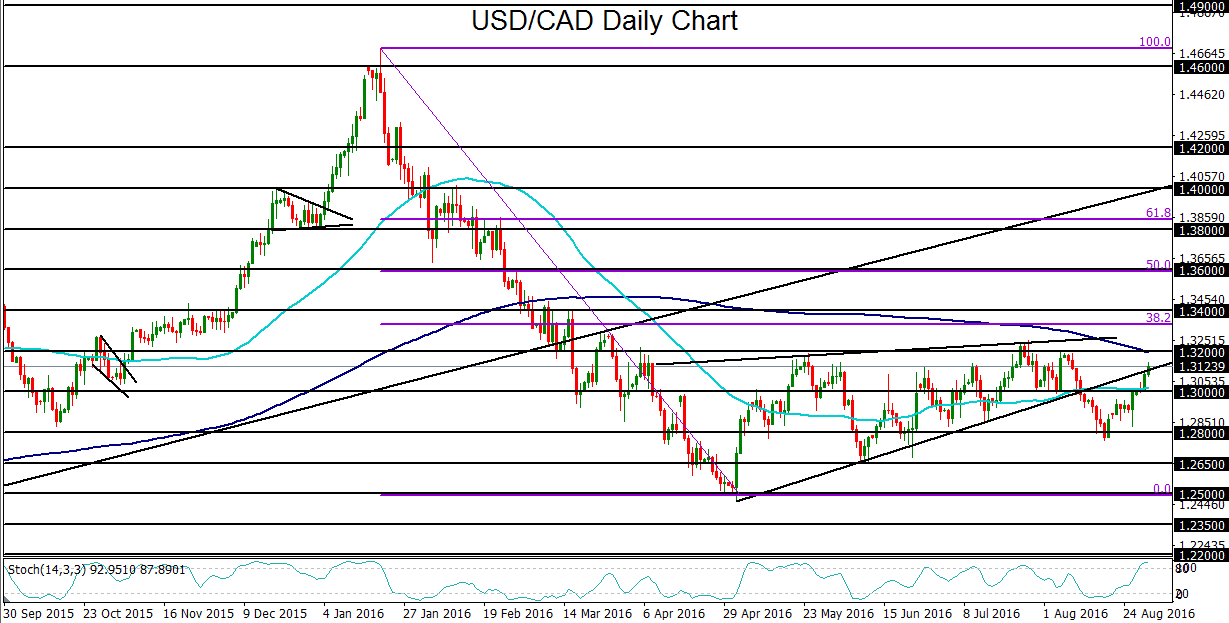