Dollar weakens ahead of key US macro pointers

Depending on the outcome of today’s data, the dollar could start to move more meaningfully ahead of the jobs report on Friday.

US investors, out celebrating July 4 holidays, didn’t miss much at all yesterday in the markets. They are back today and with them volatility is set to return. In fact, European stock markets have started sharply higher this morning although FX has been fairly quiet so far as investors await key US data releases later on in the afternoon, which should provide us vital clues about Friday’s key employment report. Depending on the outcome of today’s data, the dollar could start to move more meaningfully ahead of the jobs report on Friday.

Us economic data in focus

First up, at 13:15 BST or 08:15 EDT is the ADP private sector non-farm employment report. The ADP is expected to reveal the US economy added 190,000 jobs in June, up from 178,000 it had reported for May, last month. However, with the official jobs report coming in at 223,000 last month, the ADP may very well revise upwards its previous jobs estimate. Thus, for the dollar to regain its poise we will not only need a better than expected headline figure, but also a good upward revision to the prior number. Fifteen minutes later, at 13:30 BST or 08:30 EDT, we will have the usual weekly jobless claims data which is expected to fall a little further to 225,000. But more important will be the ISM non-manufacturing PMI at 15:00 BST or 10:00 EDT. The headline figure (expected at 58.3 vs. 58.6 last) will reveal the overall health of the world’s largest services sector. The detail of the PMI report will also be very important, in particular the employment component, which can be a good pre-NFP leading indicator.

It is also worth keeping an eye out for tweet from US President Donald Trump. Last month he tweeted about jobs even before the employment report was out. That tweet led to speculation that the jobs report would beat, sending the dollar higher. Lo and behold, the data beat expectations but with the dollar having already risen on speculation, it failed to rise further immediately after the report was published. So this is something else to watch out for. But whether or not the President should be allowed to tweet about market-sensitive information before it is known to the public is another matter.

Ahead of the upcoming data releases, the US dollar has weakened a little. This has allowed the EUR/USD to climb back towards its 50-day moving average and resistance in the 1.1710-30 range after eroding its bearish trend line. Should the EUR/USD manage to break through this 1.1710-30 area then it could pave the way for a move towards the most recent swing high at 1.1850 next. Short-term support meanwhile comes in at 1.1680, below which there’s nothing significant until 1.1600. 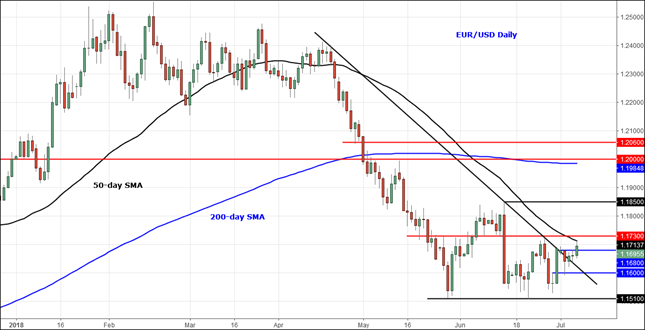