While the world waits on pins and needles for Parliament to vote on Brexit in the UK on Saturday, there is some major data left on the Economic Calendar during Asian hours which may turn some heads:

In particular, we need to look at Chinese GDP (YoY) for Q3, which is expected to be 6.1% vs 6.2% last.  A decrease in GDP may show some additional dents in the armor of China’s economy and, in all likelihood, that the tariffs placed on China’s goods are feeding through to the real economy.  And while the White House has recognized that Phase One of the US-China trade deal only needs to be signed, China suggests that there is still a lot of work to be done.  There will likely be additional comments out of China regarding the situation.

For now, DXY is pushing lower of the euphoria  of both the Euro and Sterling on the back of a potential Brexit deal.  DXY is currently made up of 57.6% of the Euro and 11.9% GBP. Therefore, the DXY direction is heavily influenced by the direction of these two pairs.  After breaking down from the rising wedge, the DXY continues to push lower today.  Levels to take note of on the downside are the 127.2% Fibonacci  extension of the move from the low on June 25th to the high on October 1st which is 97.33. The rising trendline from the bottom of the channel and the 161.8% Fibonacci retracement level from the previously mentioned timeframe is near 96.70.  On a 240-minute chart, there is resistance above at the 97.85/97.90 level, and then horizonal resistance near 98.75.  Also note that the RSI on the 240-minute has moved into oversold territory, an indication that a bounce may be ahead. With the move lower in the DXY, AUD and NZD got a head start on the GDP data release tonight.  AUD/USD is currently up 1% and running into both trendline and horizontal resistance at .6825.  With  a stronger unemployment rate earlier,  stronger GDP out of China may push it higher to near .6900.  I miss in the data could push AUD/USD towards the bottom end of the channel near .6750. 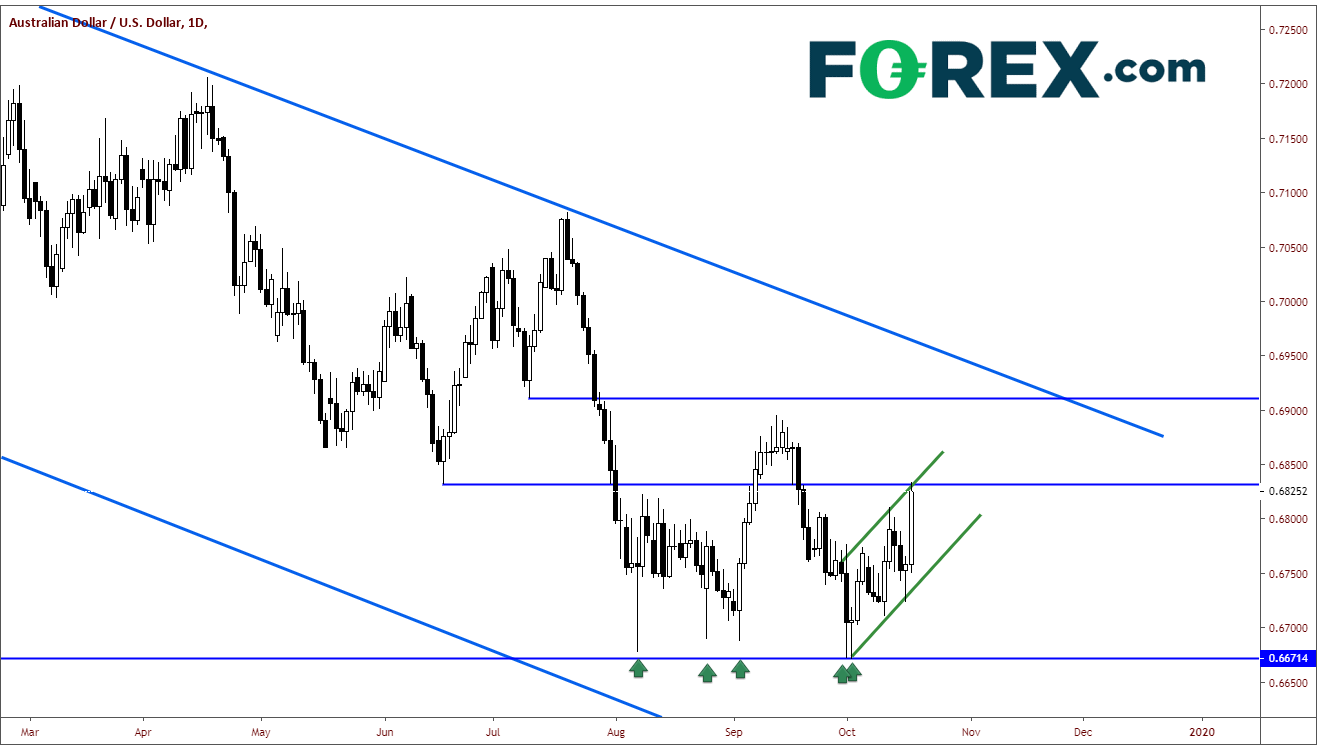