On Wednesday, Microsoft (MSFT) is awaited to post 3Q EPS of $1.29 vs. $1.14 the prior year on revenue of $34.0B compared to $30.6B last year. The Co develops software and on April 16th, the Co announced a new multiyear deal with the National Basketball Association (NBA), Women's National Basketball Association (WNBA), NBA G League and USA Basketball to become there official Artificial Intelligence partner and cloud partner to transform the fans experience. Technically speaking, the RSI is mixed with a bullish bias. We are looking at the final target of $190.50 with a stop-loss set at $168.00.


Also on Wednesday, Boeing (BA) is anticipated to release 1Q LPS of $1.10 vs. an EPS of $3.16 the prior year on revenue of $17.3B compared to $22.9B last year. The Co manufacturers commercial airplanes and on April 20th, the China Development Bank Financial Leasing Company lowered there original order of 99 737 MAX aircraft to 70 737 Max aircraft, saving the Bank and costing Boeing at least 2.9 billion dollars based on list prices, according to Bloomberg. From a chartist's point of view, the RSI is below its neutrality area at 50. The MACD is negative and above its signal line. The configuration is mixed. Moreover, the share stands below its 20 and 50 day MA (respectively at $141.77 and $196.44). We are looking at the final target of $178.00 with a stop-loss set at $111.80.


On Thursday, Amazon.com (AMZN) is expected to announce 1Q EPS of $6.34 vs. $7.09 the prior year on revenue of $72.8B compared to $59.7B last year. The Co is the world's largest online retailer and web services provider, and on April 22nd the Co reported that its subsidiary, Amazon Web Services (AWS), launched in South Africa and plans to open more AWS locations in Indonesia, Italy, Japan and Spain. On April 20th, Accenture (ACN), a leading global professional services company, revealed that it agreed to acquire Gekko, a French AWS cloud company for an undisclosed amount. From a technical point of view, the RSI is above 70. It could mean either that the stock is in a lasting uptrend or just overbought and therefore bound to correct (look for bearish divergence in this case). The MACD is above its signal line and positive. The configuration is positive. Moreover, the stock is trading above both its 20 and 50 day MA (respectively at $2153.45 and $2020.71). We are looking at the final target of $2762.00 with a stop-loss set at $2234.00.


On Friday, Exxon Mobil (XOM) is likely to unveil 1Q EPS of $0.02 vs. $0.55 the prior year on revenue of $50.8B compared to $63.6B last year. The Co explores for, produces and refines oil and gas, and on April 22nd the Co revealed that it began construction of its $10B petrochemical facility in the city of Huizhou, located in China, according to Reuters. Looking at a daily chart, the RSI is above 50. The MACD is negative and above its signal line. The MACD must break above its zero level to call for further upside. Moreover, the stock is trading above its 20 day MA ($40.64) but under its 50 day MA ($44.67). We are looking at the final target of $56.70 with a stop-loss set at $37.70.

Looking at the S&P 500 CFD. The index has been range bound since attempting to break above gap resistance near the 2900 level. A break above 2900 could signal a continuation of the rebound towards 3129. A break below 2725 support could pressure the index down towards 2538 gap support. 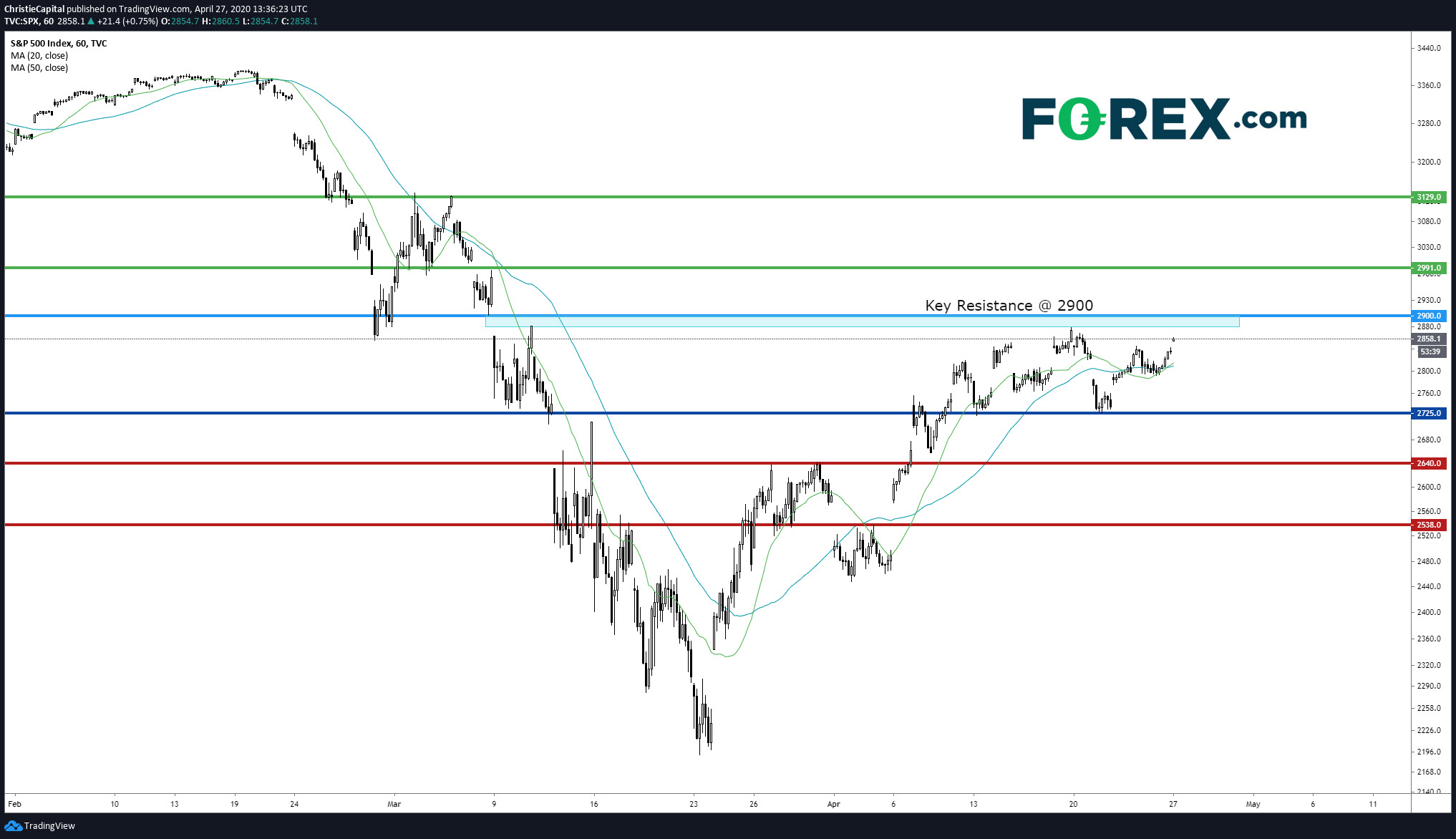