Stating the obvious here, but it is all about the European Central Bank meeting today. Evidently, many traders were just sitting on their hands this morning; they didn’t want to speculate boldly ahead of the conclusion of the policy meeting. The stock market bulls know full well that the ECB can disappoint like it did in December, while the sellers don’t want to stand in the way either should the central bank exceed expectations. This indecisiveness is clearly reflected in the daily charts of the DAX and the EUR/USD; both have moved sideways over the past several trading days, with opening and closing levels being very close to one another. Neither the bulls nor the bears have been in full control, in other words. One way or the other, today’s meeting is likely to determine the direction for the short term outlook, so expect to see sharp moves. Also, big reversals can happen on days like today – remember what the yen did following the Bank of Japan’s decision to cut interest rates into negative?

Speculation has been rife that the ECB’s Governing Council will decide to further loosen monetary policy in order to stimulate growth and inflation in an economy which is lacking on both fronts. The ECB President himself, Mario Draghi, has repeatedly hinted at doing more to achieve its mandates. And it seems like the vast majority of analysts are calling for an increase in monthly purchases to the tune of €10 billion and perhaps an extension in the duration of the programme by several months, too. In addition, the deposit rate is expected to be cut by another 10 basis points. But this may already be priced in, so the ECB may have to be even bolder for stocks to rally aggressively or the euro to weaken noticeably. However, the risk of disappointment is high. With oil prices coming back strongly and the euro remaining weak, the ECB may after all decide not to do anything at all or at best just cut rates only slightly. The ECB’s policy statement will be released at 12:45 GMT, followed by Mario Draghi’s press conference at 13:30 GMT.

If the ECB meets or exceeds expectations then European stocks could rally sharply. The rationale is that lower interest rates would stimulate consumer spending and lower borrowing costs for firms looking to raise finance. At the same time, the resulting lower yields would make investment in safe haven bonds less appealing, leading investors to alterative asset classes such as the equity and property markets. But negative deposit and low longer-term rates would hurt lenders’ profitability, so it will be interesting to see if bank shares will actually rally. In this scenario, the euro should in theory fall, especially against currencies where the central bank is either neutral or hawkish such as the AUD and USD.

But if the ECB disappoints, stocks’ initial reaction will most likely be very negative, and euro positive. Beyond the initial reaction, the longer-term outlook will depend on the ECB’s forward guidance, and also by other fundamental factors, no least the direction of oil prices, the situation in China and the impact of other central banks’ policy stances.

We have already published our DAX technical outlook yesterday, HERE. With regards to the EUR/USD, the world’s most heavily-traded pair is stuck between a rock and a hard place between 1.0800/50 and 1.1040/60. The lower end of this range marks the 61.8% Fibonacci retracement against the most recent low, the backside of the long-term broken trend line and previous support. The upper end of this range is where the broken short-term bullish trend line meets the flat-lining 200-day moving average and prior resistance. Whichever direction the EUR/USD breaks today, if it does, we are likely to see a sharp continuation in that direction for the days to come. Overall, the EUR/USD chart looks like price is trying to bottom out, but the lack of any significant progress so far is not very bullish. In any event, today’s ECB meeting should make the direction clear. 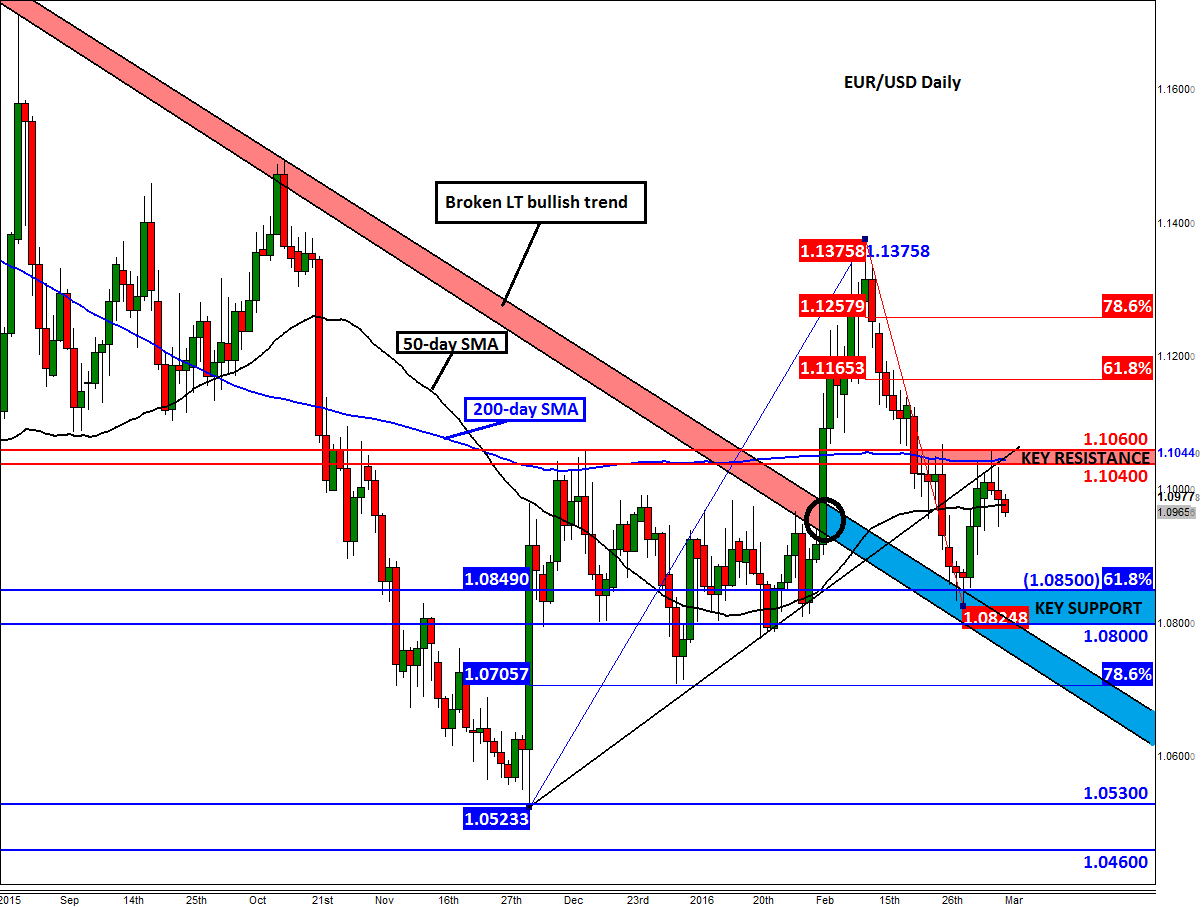