ECB Preview: Will they talk about tapering?

The European Central Bank (ECB) meets on Thursday to discuss interest rate policy.  Expectations are for unchanged on the interest rate at 0.0%.  On May 21st, Christine Lagarde said that it was too early to discuss winding down the 1.85 Billion Euro Pandemic Emergency Purchase Program. With that said, traders are looking for any kind of hints as to when the ECB will taper bond buying.  As the ECB has authority to buy bonds at any time and pace up to the 1.85 billion Euro limit, the committee decided to significantly increase the pace on bond buying back at the March meeting.  One possibility is that they can change the wording of the statement to indicate that they may bring purchase back down to pre-March levels in the near future.

Economic data has been mixed for the Eurozone.  The Markit Manufacturing and Services PMIs were both stronger than expected for May, however April Retail Sales were worse than expected.  And although some of the sentiment indications were stronger than expected in May, the June ZEW Economic Sentiment Index was weaker, with a print of 50.3 vs and expectation of 54.4.  However, we should also note that although the German ZEW Economic Sentiment Index for June was 79.8 vs 85.1 expected, but the Current conditions component  was -9.1 vs -26 expected, the least negative number since July 2019.  The main reason that the Economic Sentiment Indexes were worse than expected appears to be because of the inflation component.  For the Eurozone, almost 84% of the surveyed analysts expected higher inflation in the next 6 months.

Higher inflation down the road may present a problem for the ECB.  In the MAY flash readings, headline CPI was 0.9% YoY while the Core CPI was 2%.   “Just under 2%” has been the ECB target for years and years!  We are finally there!  As with the US, the ECB will let inflation “run hot” as many countries are still under reopening from the coronavirus pandemic.    ECB members have been hard at work over the last few weeks trying to get the message through that the ECB wont taper anytime soon and that countries still need monetary support.  Comments should likely continue along these lines at the meeting.

As the BOC is also having their interest rate decision meeting this week, EUR/CAD was our Currency Pair of the Week (See the article HERE).  Let’s look at EUR/USD here.  The pair recently broke below the bottom trendline of a bearish wedge near 1.2200 and appears to be consolidating ahead of the meeting.  If the ECB is more bearish and kicks the tapering can further down the road, EUR/USD will find first support at Fridays lows near 1.2108.  Below there is a strong confluence of support at 1.2040/1.2050 where horizontal support, the 200 Day Moving Average and the 38.2% Fibonacci retracement from the March 31st lows to the Mar 25th highs all converge. If price manages to get through there, the next support level is the 61.8% Fibonacci retracement level from the same timeframe near 1.1981.  If the ECB is more hawkish, expect EUR/USD to run into resistance at the May 25th highs and the bottom, upward sloping trendline of  the wedge near 1.2263.  Above there is horizontal resistance and the top trendline of the wedge near 1.2350.  If price manages to break above, the next resistance is the April 2018 highs near 1.2418. 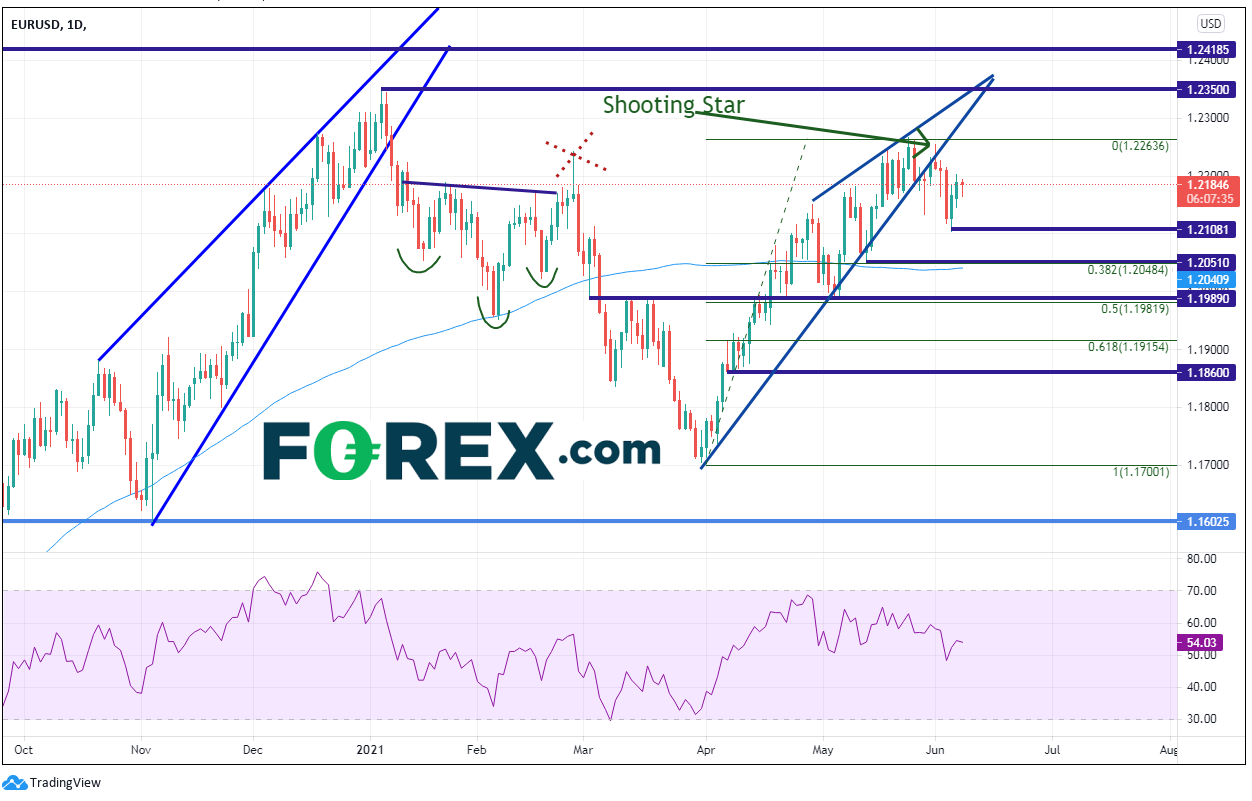 Although it is pretty clear that the ECB won’t be tapering at this meeting, their comments may suggest a move back to “pre-March” levels of bond buying.  However, if they feel it is way too early in the coronavirus recovery to even talk about lowering bond purchases, watch for Euro to possibly pullback.