The European Central Bank&rsquo;s large bond buying programme appears to be finally working its magic. Inflation is on the rise, unemployment is falling and the economic bloc is &ndash; believe it or not &ndash; growing, all thanks to years of zero interest rates, several versions of bond purchases programme and a resulting weak currency. Today&rsquo;s mostly stronger-than-expected macro pointers from the Eurozone suggests that for the first time, the ECB may seriously consider tapering its QE stimulus programme in order to avoid overcooking inflation.

The European Central Bank’s large bond buying programme appears to be finally working its magic. Inflation is on the rise, unemployment is falling and the economic bloc is – believe it or not – growing, all thanks to years of zero interest rates, several versions of bond purchases programme and a resulting weak currency. Today’s mostly stronger-than-expected macro pointers from the Eurozone suggests that for the first time, the ECB may seriously consider tapering its QE stimulus programme in order to avoid overcooking inflation.

That being said though, unemployment still remains a sticking point, especially in Italy and specifically for the 15-24 year-olds – the rate for this group having risen to 40.1% in December from 40.0% in November. There is also concerns about the levels of consumer spending across the Eurozone. Consumer spending in France, for example, fell 0.8% month-over-month in December while German retail sales dropped 0.9% in the same month.

However, generally speaking, today’s Eurozone data has been good. After all, the German unemployment rate has dropped to a fresh post-reunification low at 5.9%. In the Eurozone as a whole, the rate of unemployment now stands at 9.6%, its lowest level since May 2009. The unemployment rate is down nearly 1% from 10.5 per cent recorded in December 2015, but it still remains very high. The consumer price measure of inflation is rising, too, especially in Germany where CPI has risen to 1.9%, its strongest since mid-2013. In Spain, it is even stronger at 3.0%. For the Eurozone as a whole, CPI rose to a four-year high of 1.8% year-over-year, representing a sharp jump from 1.1% in November.

Overall, today’s data releases from the Eurozone have been strong, though I am not quite sure if the ECB will necessarily make a knee-jerk reaction by reducing QE in the summer. I think there is still a lot of slack in the Eurozone economy and so the ECB may tolerate a temporary rise in inflation above the target. The real problem is if inflation in the economic powerhouse AKA Germany starts to accelerate further. With interest rates being at zero and QE near full throttle, the last thing the ECB would want to do now is to embark on an aggressive rate hiking cycle. This will be very damaging. So the pressure – especially from the Germans – may start to increase on the ECB going forward. If Mario Draghi hints at tightening its policy earlier than expected then the euro may start to appreciate in the months ahead.

For now though, the outlook for the euro remains mixed to slightly negative, especially against currencies where the central bank is already hawkish – such as the US dollar. But against a weaker currency, the euro may start to perform better. One such currency is the Canadian dollar, after the Bank of Canada recently suggested that under Donald Trump, the protectionist policies from the US government may hurt economic growth in its northern neighbour and that this may require a rate cut, causing the expansionary monetary policy to remain in place for longer than expected.

From a technical perspective, the EUR/CAD has held its own above the 1.3820-3965 support area for a good several weeks now. Until we have a weekly closing break below this support range, the most likely outcome in light of the above fundamental developments is that for price to break above the 1.4260-4385 resistance range in weeks or possibly days ahead. Shorter-term traders may wish to start looking for bullish setups on their lower time frames on the EUR/CAD. 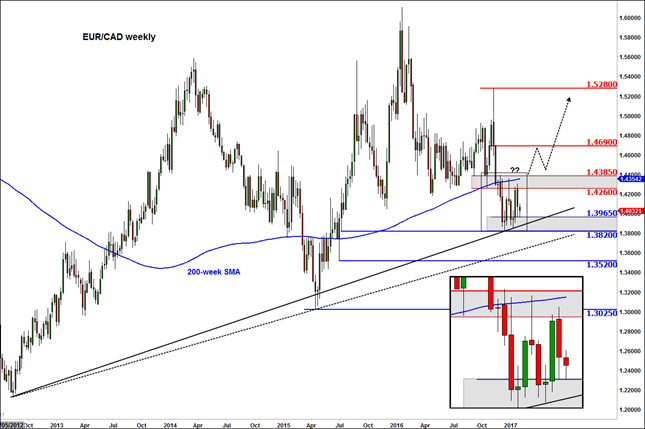