ECB remains dovish but will Draghi offer any new insights?

The European Central Bank press conference is today’s most anticipated event where Mario Draghi could make clear ECB’s plans regarding the future path of Eurozone monetary policy. In its policy statement, the central bank merely re-iterated that it sees QE running until the end of December or beyond if needed and that the stimulus can be increased in size and duration if the economic outlook worsens.

The European Central Bank press conference is today’s most anticipated event where Mario Draghi could make clear ECB’s plans regarding the future path of Eurozone monetary policy. In its policy statement, the central bank merely re-iterated that it sees QE running until the end of December or beyond if needed and that the stimulus can be increased in size and duration if the economic outlook worsens. The policy statement was definitely more dovish-leaning than expected and we saw the euro fall and DAX bounce in the immediate aftermath of its release. But will the ECB president shed more light into the ECB’s thinking? Any surprise comments could send the euro back higher, else if Draghi merely re-iterates recent comments then the press conference could turn out to be a damp squib event.

Meanwhile overnight saw the Bank of Japan also decided to keep its monetary policy unchanged as had been widely expected. But it did push back its 2% inflation target forecast to “around” 2019 from 2018. This was another way of indicating to the market that Japan’s monetary policy will remain extraordinary loose for even longer than expected. The yen weakened and the Nikkei index rallied as result. Elsewhere, Australian employment figures came in around expectations at 14,000 net jobs gain. The sharp increase in full time employment was offset by falls in part time jobs. However, despite the strong rise in full time jobs, the Aussie dollar fell as traders used the opportunity to bank profit after the currency’s strong rally in recent days.

In the UK, there was some good news out this morning as warmer weather in June boosted retail sales by 0.6% month-over-month. This was slightly better than expected, but it failed to boost the pound as concerns about UK’s political situation and Brexit weighed on sentiment. According to Ipsos MORI survey for The Standard, Theresa May’s satisfaction rating dropped to the lowest for any modern-day Prime Minister after an election. Meanwhile after four days of talks, there’s still no real progress on Brexit front. The EU's chief Brexit negotiator said this morning that the UK must say where it stands on the divorce bill before talks on a trade deal can start. Despite these uncertainties, UK assets were not all out of favour. The weakness in the pound saw speculators pile in on the UK stock markets instead. The commodity-heavy FTSE 100 index was also boosted by ongoing “risk-on” sentiment and the rebound in crude oil prices. At the time of this writing, the FTSE was up a good 0.70% on the day at 7484.

With the ECB remaining slightly dovish and the pound being undermined by the above-mentioned concerns, the EUR/GBP continues to remain directionless for the time being. But that could change by the time the ECB’s presser finishes later on today. Technically, the cross has again entered into the key 0.8860-0.8900 resistance zone, where it has struggled in the past. However despite printing weakly bearish-looking candles, we haven’t seen any real follow-through to the downside yet. That could change if and when the EUR/GBP breaks key support at 0.8750.  A shorter-term term support level comes in at 0.8815. 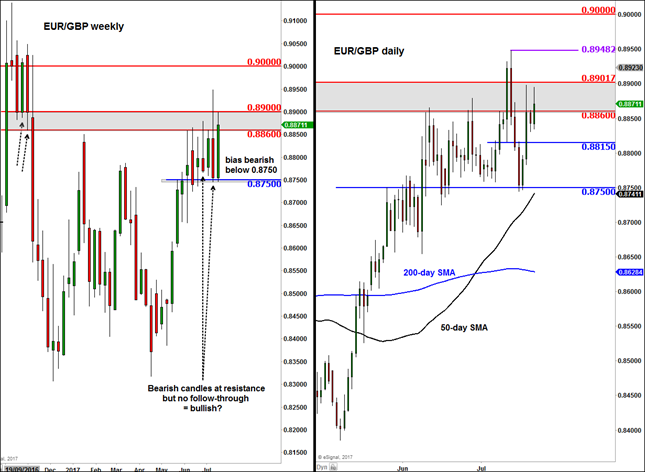