EM Rundown: Which emerging markets will capitalize on falling currencies?

<p>As we noted earlier this morning, it’s shaping up as a classic “risk-off” day as global stocks, oil and high-yielding bonds continue to sell off in the US afternoon session. Naturally, that also means that emerging market currencies are having a rough go of it as well, with widely-followed EM currencies like the Turkish lira, South African rand, and Mexican peso all losing ground against the dollar. While the greenback fell relatively sharply across the board last week, the long-term trend for most EM currencies remains to the downside, prompting us to ask: <i>“Can emerging markets capitalize on thie falling currencies?”</i></p>

As we noted earlier this morning, it’s shaping up as a classic "risk-off" day as global stocks, oil and high-yielding bonds continue to sell off in the US afternoon session. Naturally, that also means that emerging market currencies are having a rough go of it as well, with widely-followed EM currencies like the Turkish lira, South African rand, and Mexican peso all losing ground against the dollar. While the greenback fell relatively sharply across the board last week, the long-term trend for most EM currencies remains to the downside, prompting us to ask: "Can emerging markets capitalize on thie falling currencies?"

Most of the headlines of late have focused on the negative effects of falling EM currencies, including increasing foreign debt costs and the at-the-margin hawkish (or at least less dovish) impact on EM central banks. However, a falling currency can also have economic benefits, especially on the manufacturing and export sectors of the economy. Therefore, we would expect countries with relatively large manufacturing sectors to thrive in an environment of falling EM currency values (not to mention persistently low commodity costs, which are often an important cost for manufacturers).

According to Capital Economics, some of the EM countries with relatively large manufacturing output include the Czech Republic (~32% of Gross Value Added), South Korea (~30% of GVA), Thailand (~28% of GVA), Malaysia (~25% of GVA), and Poland (~25% of GVA). Many of these countries’ currencies aren’t particularly actively traded (and some, like the Czech koruna, are essentially pegged to another currency – the euro in this case), but long-term traders looking to play this theme may want to focus on the Polish zloty.

While there are certainly serious political concerns about the current ruling Law and Justice Party (PiS), Poland’s economic situation is not quite as grave as some of its nearby neighbors; to wit, the country recently saw its highest inflation (lowest deflationary) figure of -0.5% in December and the historically high unemployment rate briefly dropped into the single digits for only the second time this century last year. Crucially, the central bank still maintains a positive interest rate of 1.5%, giving it ammo to fight against deflationary pressures.

Looking to the chart, EUR/PLN has been trending consistently higher since Q2 2015, and last month’s downgrade by ratings agency Standard and Poor’s only added more fuel to bullish flames. Moving forward, traders will want to keep a close eye on the 100-day moving average (currently near 4.30) – as long as rates remain above that level, the near-term trend will continue to point higher, perhaps toward the December 2011 high near 4.60. However, a break below the 100-day MA may signal that the beneficial effects of the zloty’s prolonged depreciation may finally be emerging. 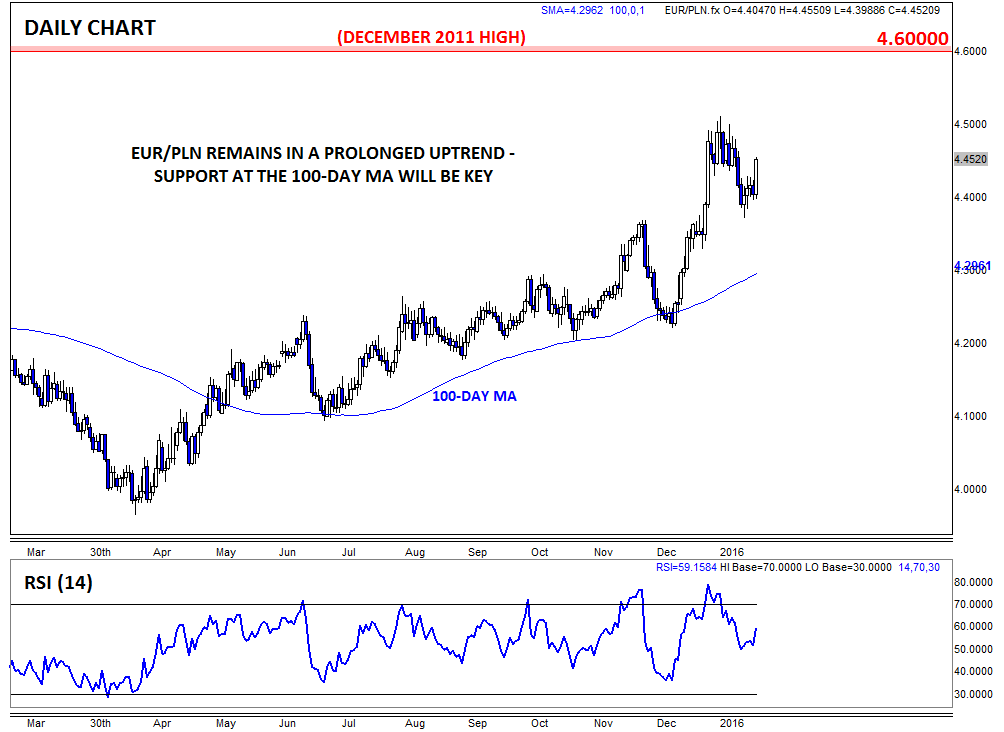