ETH/USD: Everything you need to know about EIP-1559

The most dramatic fundamental shift in the history of Ethereum’s monetary policy is nigh!

As of writing, China’s crackdown on the broad cryptoasset industry is casting a pall over the nascent asset class, but when it comes to crypto, there’s always an exciting new development on the horizon.

In Ethereum’s case, the most-anticipated upcoming breakthrough is from EIP-1559, which represents the most dramatic fundamental shift in the history of Ethereum’s monetary policy.

First proposed by Ethereum’s inventor Vitalik Buterin years ago, EIP-1559 is an Ethereum Improvement Proposal that fundamentally changes the way transactions are processed. As currently designed, anyone trying to send a transaction on the Ethereum network must attach a “gas fee”, paid in Ethereum, to miners to process their transactions. As we’ve seen numerous times over the past couple of months, these gas fees can skyrocket when transaction demand is high (for example, when prices are crashing or a popular dApp is being used heavily).

EIP-1559 changes this mechanism to set a dynamically-adjusted “base fee” for each transaction, which will be burned rather than going directly to miners. Participants can also include an optional “tip” with their base fee to speed things up if desired. While miners aren’t happy that fees they’ve previously received will instead be burned away, the change should simplify the cumbersome process of deciding how much to pay for each transaction and may even lower gas prices slightly.

The modification went live on Ethereum’s Ropsten test network on June 24, with additional testnet launches expected on June 30 (Goerli) and July 7 (Rinkeby) ahead of the launch on the official Ethereum mainnet on/around August 4.

How will EIP-1559 impact Ethereum’s price?

From a fundamental perspective, the biggest impact of EIP-1559 is the shift to burning transaction fees rather than sending them to miners who generally sell them to cover their costs, creating a constant stream of ETH selling pressure. With those fees soon to be burned, the overall inflation rate of Ethereum’s supply will fall from the current ~4%, and some analysts believe that Ethereum’s supply may actually turn negative, meaning more ETH could be burned by EIP-1559 than is issued to the miners securing the network.

As we all learned in our high school economics courses, a decrease in supply (or even a smaller increase in supply) can lead to a higher price if demand continues to grow. While demand for transactions on the Ethereum network have slowed in recent weeks amidst the general downturn in the market and the introduction of new “layer 2” chains with cheaper transaction fees, this fundamental shift in Ethereum’s monetary policy still represents a much-needed bullish catalyst for the price of ETH.

Looking at the chart, ETH/USD has broken down below the psychologically-significant $2,000 level. That level of previous support has now become resistance, putting a cap on prices in the short term. With prices currently showing a well-defined series of lower lows and lower highs, the near-term downtrend remains the dominant feature of the chart, with no major support until the January 2018 high near $1400. 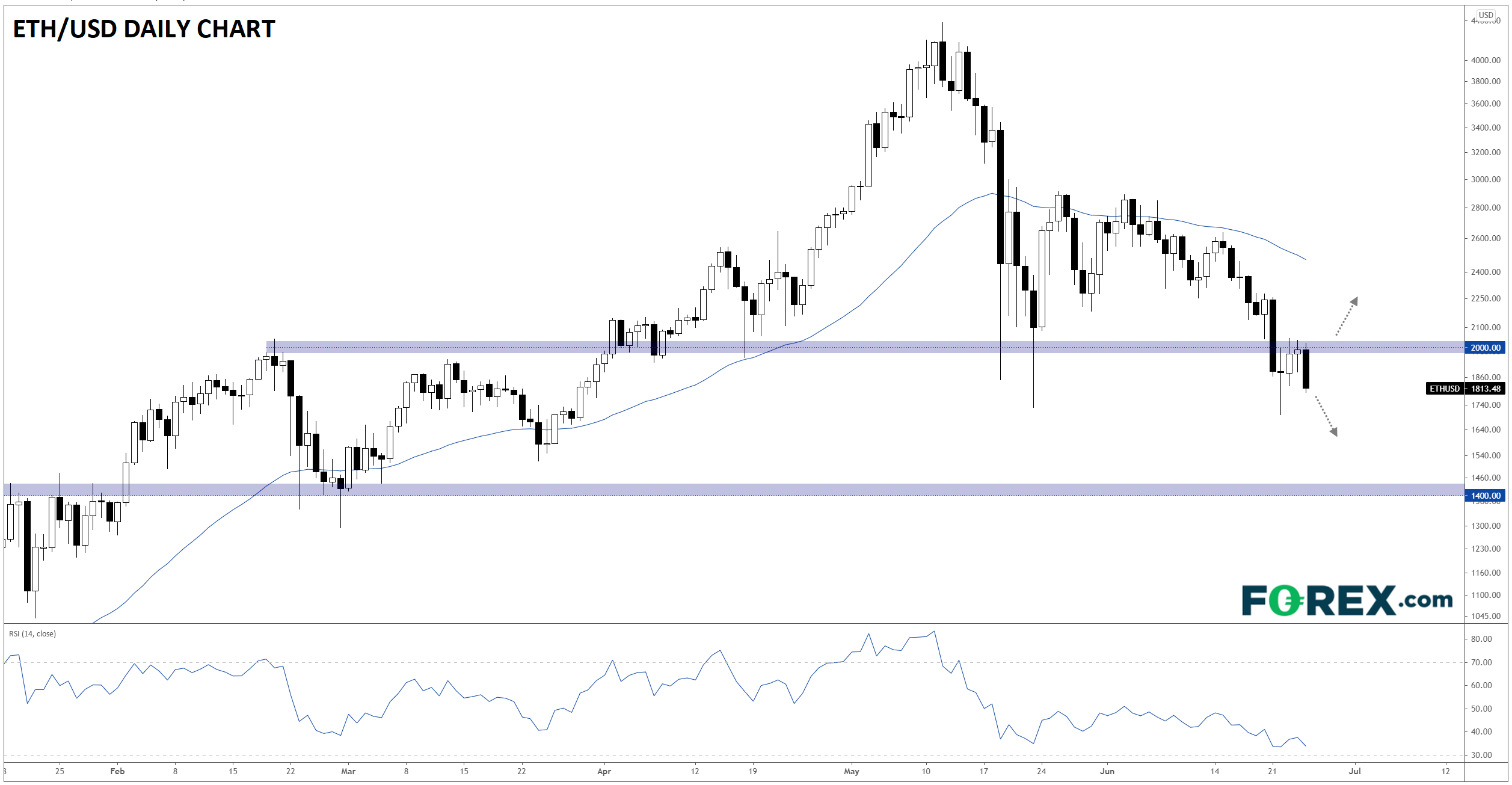 From a trading perspective, readers may want to wait to see if ETH/USD can regain the $2,000 level before considering new long positions, though previous-resistance-turned-support near $1400 may also represent a logical area to buck the dominant near-term downtrend.

Whether or not it ultimately boosts prices, anyone interested in trading the planet’s second-largest cryptoasset needs to be aware of EIP-1559 and its implications heading through the summer and beyond!