SSE, an energy company, released a 1Q trading update: "Coronavirus impacts on operating profit for the first three months of trading are in line with our expectations, with the total for 2020/21 still anticipated to be in the range of £150m to £250m before mitigation. SSE continues to keep this assessment under review and will provide guidance on adjusted earnings per share later in the financial year."

Experian, a consumer credit reporting company, issued a 1Q trading update: "We delivered growth in North America and Brazil during Q1, which helped offset weaker conditions elsewhere, and as a result total revenue was down just (1)% at constant exchange rates, with organic revenue down (2)%. At actual exchange rates total revenue declined by (5)% due to the weakness of the Brazilian Real relative to the US dollar. (...) We currently expect that organic revenue for Q2 FY21 will be in the range of flat to (5)%."


#GERMANY - AUSTRIA#
Sartorius, a laboratory equipment supplier, said it has raised its full-year revenue growth forecast to 22% - 26% from 15% - 19% previously, citing "the strong performance of the Bioprocess Solutions Division in the first half of 2020 as well as on high demand also expected to continue for the rest of the current fiscal year". Meanwhile, the company reported that 1H preliminary order intake grew 27.5% in constant currencies and revenue was up 17.9%.

Zalando, a e-commerce company, is expected to released a 2Q trading update.


#FRANCE#
Alstom, a transport system and equipment manufacturer, posted 1Q revenue dropped 27% on year (-25% organic growth) to 1.51 billion euros, while orders received grew 2% (+2% organic growth) to 1.65 billion euros. The company said: "The objective of a 5% average annual growth rate over the period from 2019/20 to 2022/23 should be slightly impacted by the temporary slowdown of tender activity, yet the 2022/23 objectives of 9% aEBIT margin and of a conversion from net income to free cash flow above 80% are confirmed."

Vinci, a concessions and construction company, is expected to release a 2Q business update after market close.


#PORTUGAL#
EDP, a Portuguese electric utilities company, announced that it has agreed to acquire a 75% stake in electricity company Viesgo from Macquarie Infrastructure and Real Assets, financing by a 1.02 billion euros rights issue.


#BENELUX#
Heineken, a Dutch brewing company, announced that 1H preliminary net revenue dropped 16.4% on year on an organic basis and beer volume declined organically by 11.5%. Also, preliminary operating profit sank 52.5% and net profit slid 75.8%. The company said: "Exceptional items will include around E550 million of impairments on tangible and intangible assets, leading to a reported net loss of around E300 million." From a daily point of view, the share is pushing above the upper end of the trading-range. The 50-period moving average is pushing the stock towards the upside. Moreover, the RSI has rebounded and is not overbought. Above 79.6E look for the horizontal resistance at 90.9E and 98.3E in extension. 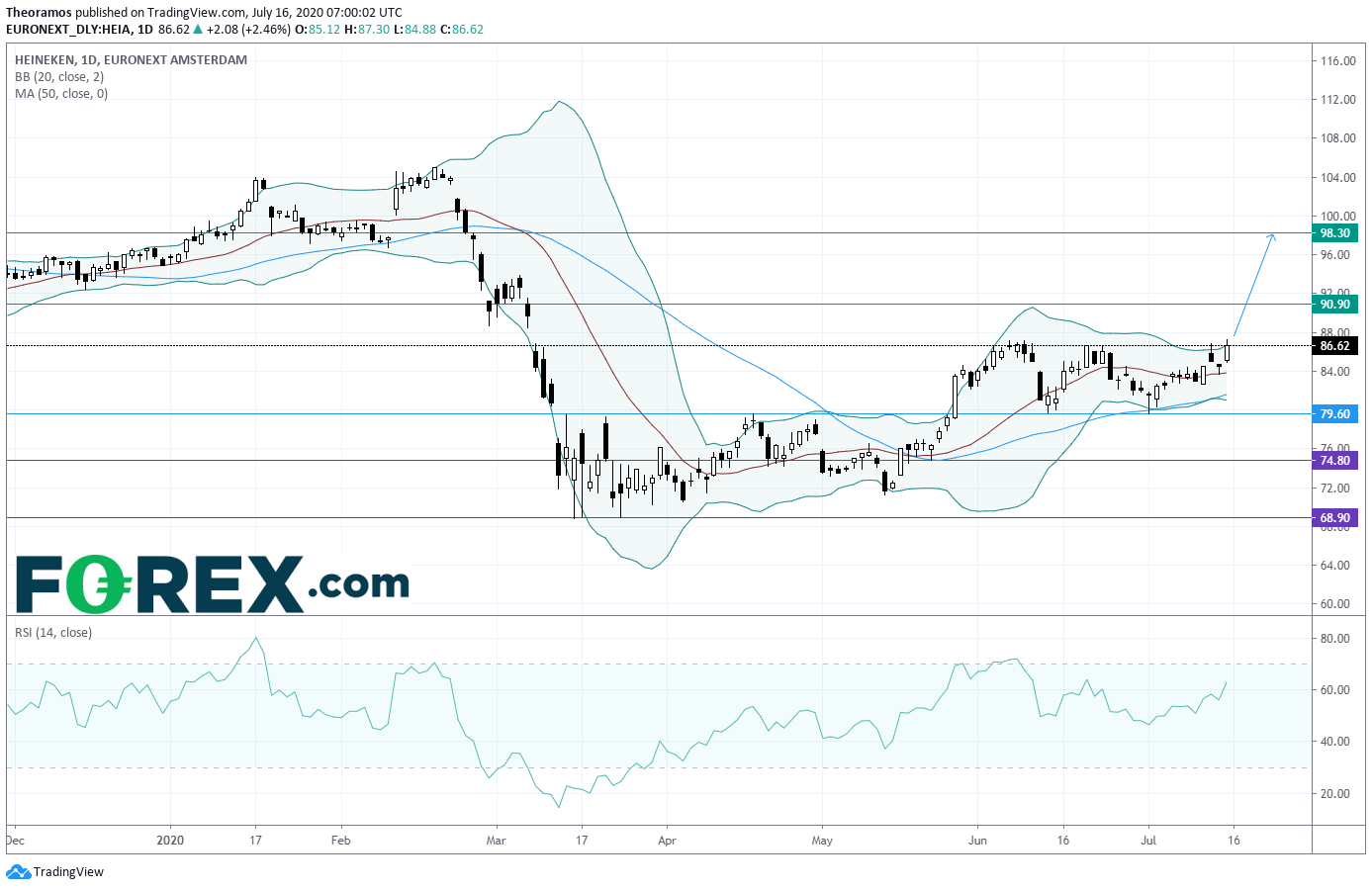 
#SWITZERLAND#
Temenos, an enterprise software developer, announced that 2Q adjusted EPS declined 13% on year to 0.70 dollars and adjusted EBIT slid 8% to 67 million dollars on adjusted revenue of 216 million dollars, down 9% (-8% at constant currency). Regarding the outlook, the company said: "We continued to see an impact on license signings in the second quarter due to Covid-19, however we expect a gradual improvement in Q3 and Q4. (...) We are reconfirming our guidance for the year. We are guiding for recurring revenue growth of at least 13%, and EBIT growth of at least 7%."