#GERMANY#
Daimler, an automobile group, announced that 2Q net loss widened to 1.91 billion euros from 1.24 billion euros in the prior-year period and EBIT loss increased to 1.68 billion euros from 1.56 billion euros on revenue of 30.18 billion euros, down 29%. Regarding full-year outlook, the company said: "In view of declining unit sales due to the covid-19 pandemic, we assume that Group revenue in full-year 2020 will also be lower than in the previous year. (...) Assuming that the economic recovery continues in the second half of the year and that there is no new significant wave of covid-19 infections in our key sales markets, we expect both Group EBIT and the free cash flow of the industrial business to be positive in 2020, but lower than in the previous year."

Pernod Ricard, an alcoholic beverages producer, said it has lifted its full-year profit from recurring operations forecast to -15% from -20% previous estimated in March, citing "strong cost mitigation".
From a chartist point of view, the share price is supported by a rising trend line since March despite the short term consolidation area. The stock price is testing the upper Bollinger band and the upper end of its short term trading range. The 50DMA is still playing a support role. Moreover, The RSI bounced off a former internal trendline in place since January's 2020 highs. Above 136.6E, the bias remains bullish. A breakout confirmation of the consolidation range would open a path to see 155.15E and 161.95E in extension. Alternatively, a break below the consolidation area at 136.60 would call a new down move towards 125.7E. 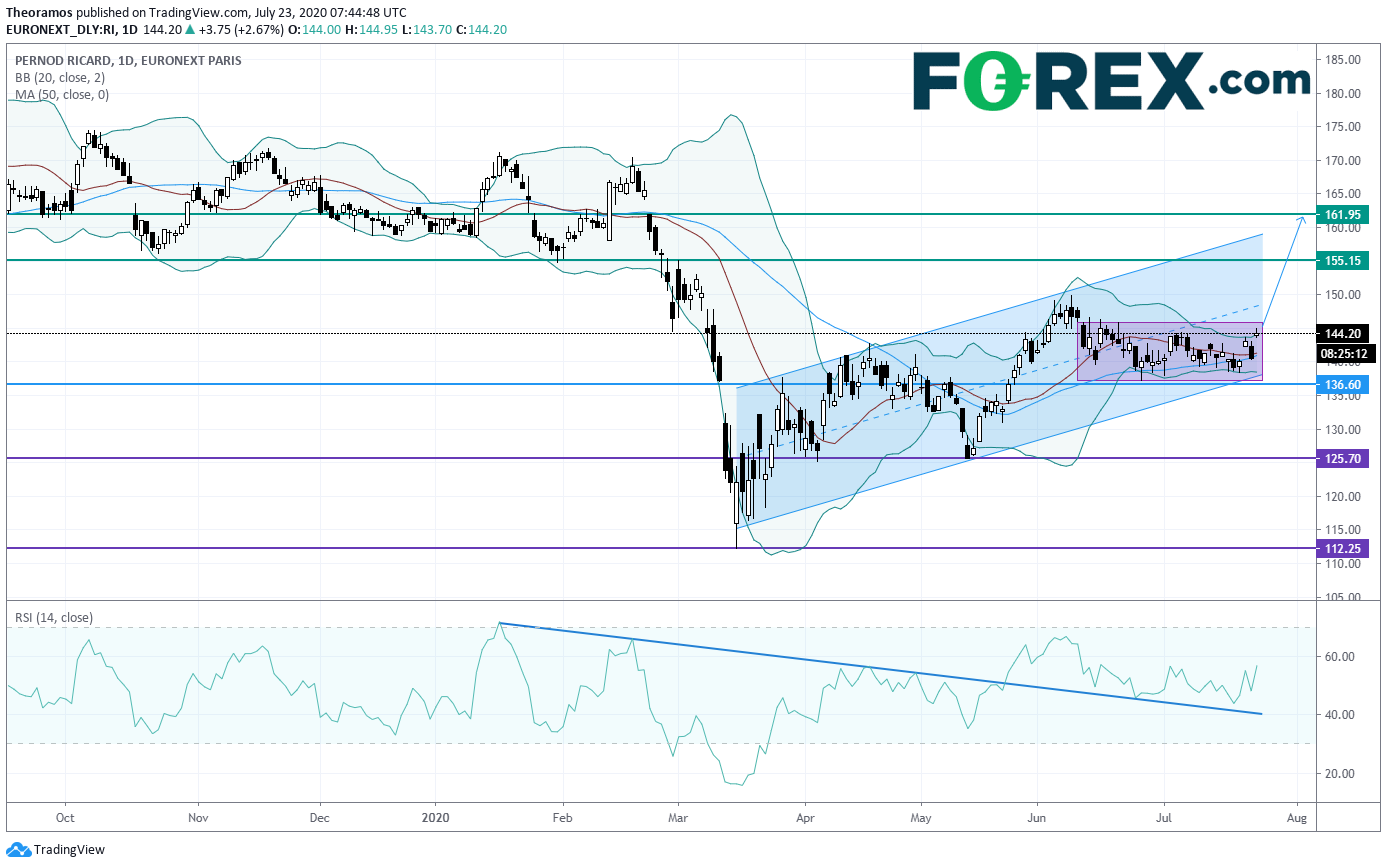 Ingenico, an electronic transactions technology company, reported that 1H net income grew 9% on year to 87 million euros and EBITDA climbed 10% to 278 million euros on net revenue of 1.24 billion euros, down 9% (-8% on a comparable basis). The company confirmed its full-year net revenue guidance of "a mid to high single digit organic decline".

Worldline, a payment and transactional services provider, announced that 2Q net income declined 62.5% on year to 53 million euros on revenue of 1.09 billion euros, down 5.7%.


#ITALY#
STMicroelectronics, a semiconductor manufacturer, posted 2Q net income declined 43.7% on year to 90 million dollars and operating income sank 45.8% to 106 million dollars on net revenue of 2.09 billion dollars, down 4.0%. The company said: "Looking at the third quarter, we expect sequential revenue growth of 17.4% at the mid-point. (...) We will drive the Company based on an updated plan for FY20 net revenues between $9.25 billion and $9.65 billion with growth in the second half over the first half to be in the range of $610 million to $1.01 billion."