The pound has suffered a hat-trick of bad news this week as the latest Purchasing Managers’ Indices (PMI) for all three major sectors of the UK economy disappointed expectations.

The disappointing PMI data across all three major sectors of the UK economy clearly underscore the cautious sentiment among Britain’s business leaders. Chief among their concerns is the possibility that Britain may leave the EU, which is seen as a negative outcome for trade among other things. Although the latest polls show the "stay" camp has the edge, opinions and therefore actual votes could swing in favour of the "leave" camp closer to the time of referendum.

Against this backdrop of uncertainty, sentiment is likely to remain cagey until at least the EU-UK vote is out of the way on June 23. The potential for a lack of significant business spending in the meantime because of this "Brexit" risk could hurt UK growth, potentially causing the second quarter GDP to contract.  Consequently, the pound is likely to trade inside large ranges (as discussed below).

After the manufacturing sector PMI had revealed a surprise contraction for the first time since March 2013 and the construction activity slowed to its lowest level since mid-2013 earlier this week, it was up to the key services sector to help rescue the slumping British pound.

However, activity at the UK’s dominant sector also slowed surprisingly sharply with the April PMI coming in at 52.3 this morning, its lowest reading since February 2013, versus 53.5 expected and 53.7 in March.

The pound’s response on Thursday morning was not exactly swift, as the currency actually managed to hold onto its earlier gains against the euro and Swiss franc, but against other major currencies it fell. The GBP/USD extended its decline for the third consecutive day.

The GBP/USD’s selling is obviously helped by a rebounding US dollar on the back of some rare positive data from the US this week, including the ISM non-manufacturing PMI and factory orders. The dollar’s next big move will likely depend on the outcome of the April jobs report which is scheduled for release on Friday. The leading indicators for the non-farm jobs reports has been mixed, so it is anyone’s guess what the actual headline NFP number will be, come Friday. If this shows a surprisingly strong number then the GBP/USD could extend its decline, otherwise a rebound to prior short-term resistance levels such as 1.4565 and 1.4665 could be the potential outcome.

Overall, the Cable is basically stuck in a long-term consolidation pattern, so traders may wish to remain nimble for now. As can be seen from the monthly chart, the GBP/USD is now trading comfortably above long-term support at 1.4000 but is holding below the prior support region of 1.4665-4830, an area which has turned into resistance at the start of this month. In the event that the British public votes to stay in the EU (or if this outcome becomes obvious in advance of the vote), the GBP/USD may break through this region and rally sharply, possibly towards the long-term bearish trend line and the 50-month moving average around the 1.55/56 area next. A "Brexit" however may be the final nail in the coffin which could send the pound tumbling below 1.4000.

Meanwhile on the smaller daily time frame in figure 2, one can see that the bearish trend line has been re-established after the buyers failed to hold their ground above the key 1.4665 and now 1.4565 short-term resistance levels. Until and unless these levels break now, the technical path of least resistance in the very near term is likely to be to the downside.

However that being said, the potential downside could be limited as price has already formed an Inverse Head and Shoulders reversal pattern. The 50-day moving average is now pointing higher, too. Furthermore, this week’s sell-off has allowed the daily RSI to move away from the "overbought" levels of around 70. The RSI is now near the rising trend line, so there’s potential for a bounce especially since price is likewise testing or nearing its own key short-term supports at 1.4460 and 1.4400. In truth, a lot will now depend on the outcome of Friday’s US jobs report, and so treat your technical levels with a degree or two of caution. 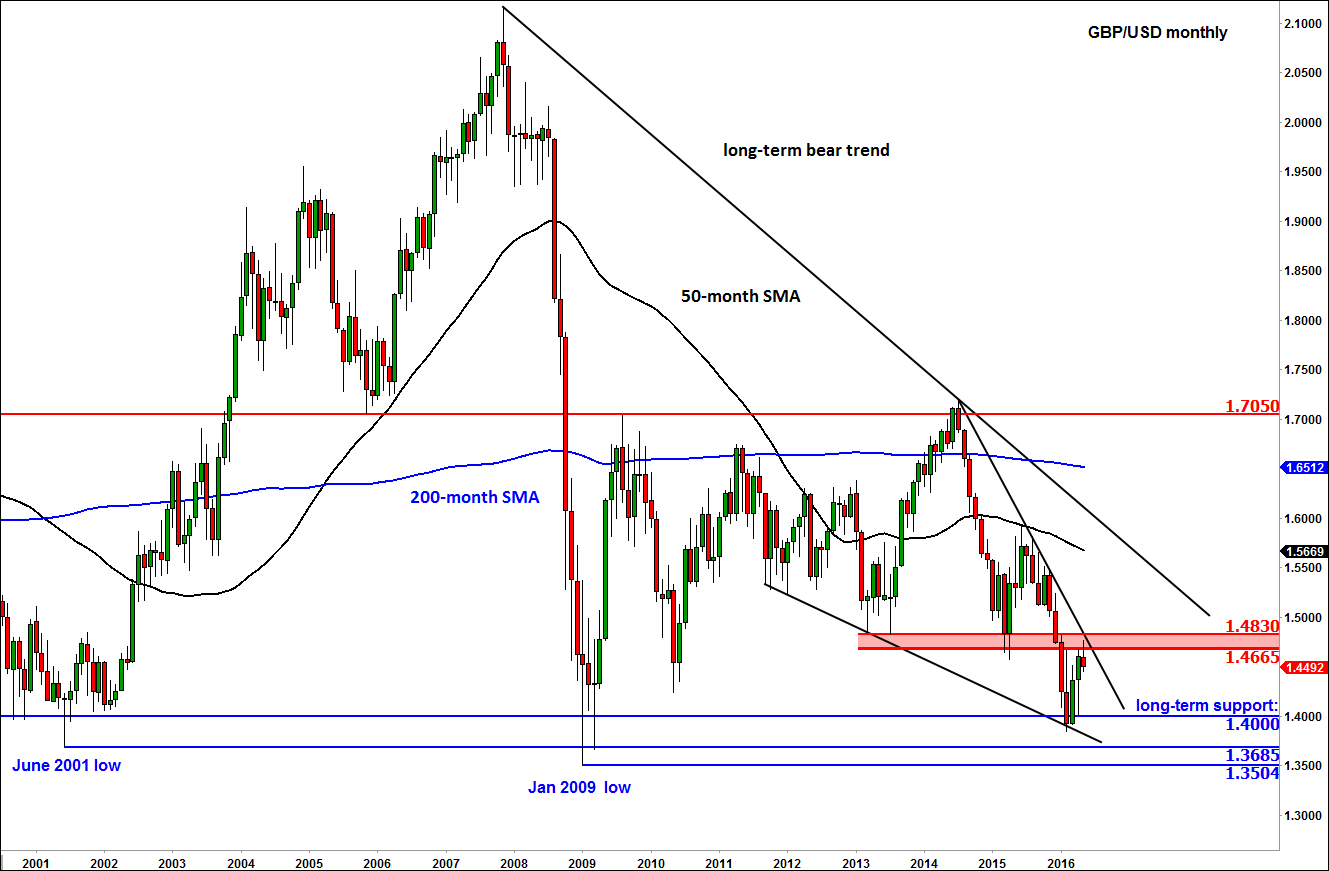 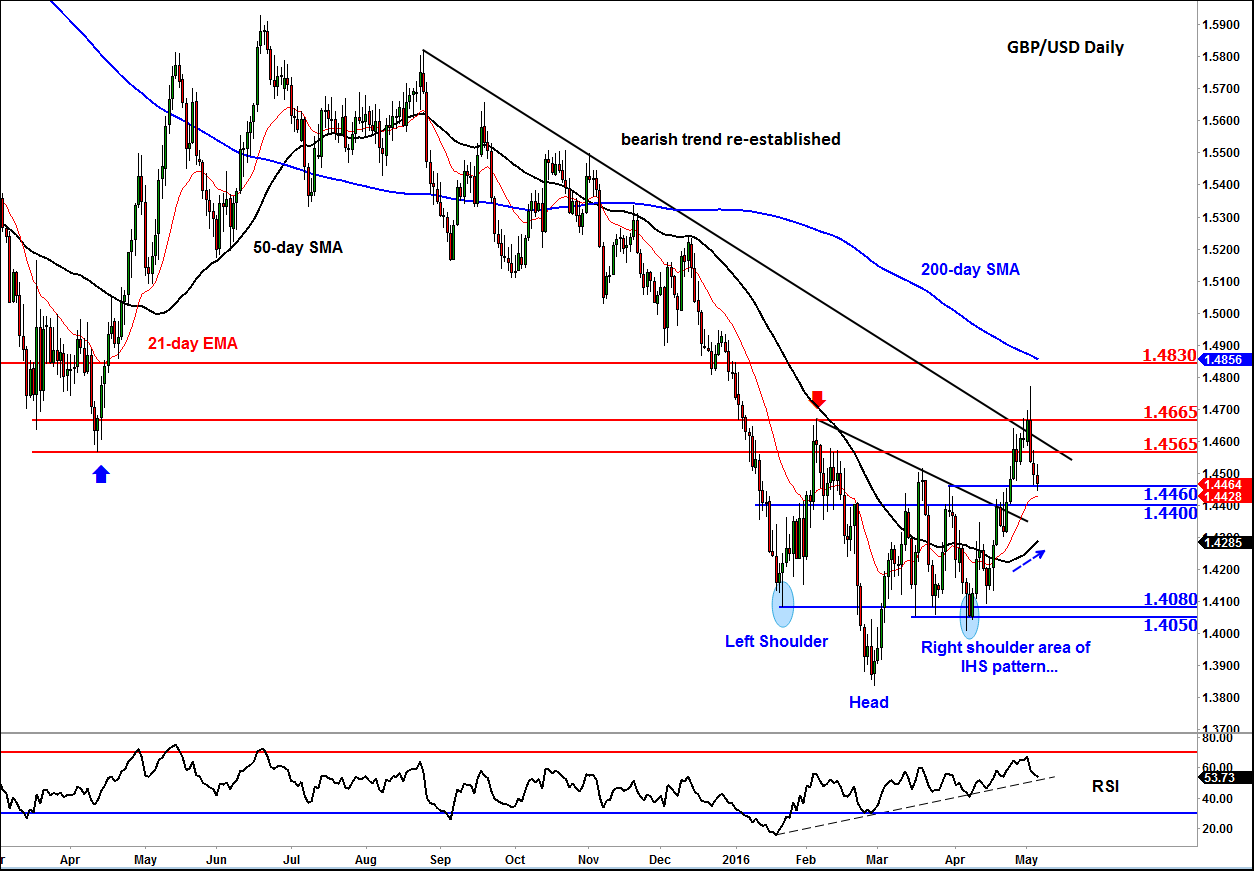