The focus of the market is on the European Central Bank, which is due to make a decision on interest rates shortly.

European stocks have started the day on the back foot with the German DAX index being held back by a 5.5% drop in shares of Merck after disappointing earnings. What’s more, stocks were held back by soft data, this time it was a 3.9% month-over-month drop in German factory orders, which was more than the expected 1.9% fall. However, the focus of the market is on the European Central Bank, which is due to make a decision on interest rates shortly. No one is actually expecting the ECB to make any changes to interest rates or QE at this meeting. However, any hints of future monetary policy tightening, including the ending of QE stimulus and/or the possibility of rate hikes down the road, should serve as a bullish trigger for the euro, and a bearish trigger for the stock markets. But given the euro’s strength, the ECB is more likely than not to attempt and limit hawkish rhetoric in an attempt to avoid further euro strength. This outcome is most likely to be positive for European stocks – German equities in particular.

The other point of focus will be on US President Trump after he announced plans to impose hefty import tariffs on metals, which triggered threats of retaliation from around the globe including the European Union. If Trump presses ahead with his plans then this could ignite a global trade war which may result in heightened volatility for the stock markets. The White House has stated that the President will provide details of the tariffs either today or on Friday, and that Canada and Mexico may be exempt. Excluding Mexico and Canada, the top three nations that the US relies on imports are China, Japan and Germany, in that order.

However, from a technical point of view, the DAX looks rather bullish to me, despite its weakness at the start of today’s session. Since the start of this week, it has formed two large bullish engulfing candlestick patterns on the daily time frame. They clearly show that the selling pressure couldn’t last and that the buyers won the battle on both occasions. On their own, these candlestick patterns would normally be bullish anyway. However the fact that they have occurred around the 11870 prior support, makes them even more interesting. On top of all this is the momentum indictor RSI, which has shown a positive divergence near oversold levels. So, the technical outlook is starting to looks positive, even though the market is still technically in a corrective trend with those lower lows and lower highs, not to mention the fact that the 50- and 200-day moving averages are both above market and pointing lower now. For those reasons, the bulls will need to remain nimble and consider booking profit at next trouble area. Indeed, there are lots of resistance levels coming up, starting at 12270/80, which had been support previously. Above here, the next key level is at 12435, below which is a gap that may need to be filled. The first line of support is seen around 12190, although this level was being breached at the time of this waiting. Still, if we see some bullish price action below this level then this would be ideal for the bulls, as surely they don’t want to see too much of a retracement given the daily bullish candle from the day before. In truth, a lot of people are now sitting on their hands, until the ECB is out of the way. 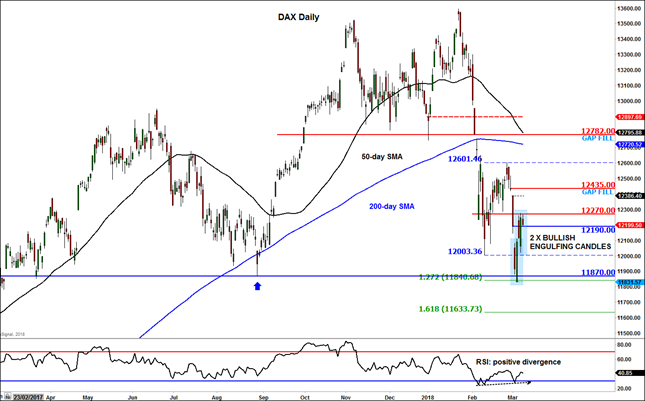