EU stocks on shaky footing ahead of French elections

European politics will be dominating the headlines in the coming weeks and months. As a result, the market’s focus will turn to European markets as we could see heightened volatility and therefore more trading opportunities.

The result of the first round of the French Presidential election on Sunday will determine which two candidates will be included in the second round of voting on May 7th. A month later, on 8th June, British citizens will be casting their own votes to elect the next UK Prime Minister after Theresa May called for a snap election this week. So, European politics will be dominating the headlines in the coming weeks and months. As a result, the market’s focus will turn to European markets as we could see heightened volatility and therefore more trading opportunities.

In France, Emmanuel Macron and Far Right candidate Marine Le Pen have seen their chances slip, according to the latest opinion polls. This has revived the campaigns of centrist Francois Fillon and Far Left candidate Jean-Luc Melenchon. Of course, a win for Le Pen in the first or indeed second round does not necessarily mean French and other European markets will collapse, for after all the UK’s FTSE 100 rallied when the public here voted for Brexit. But this time it could be different as a potential Frexit could raise serious question marks about the future of the EU.

Ahead of the outcome of the French elections and amid ongoing uncertainty about the future of the European Union, European stocks may come under pressure as investors withdraw from equity funds and short sellers emerge. There is also the seasonality factor to take into account as we head towards the summer months, when the equity markets typically don’t perform very well. Apart from these issues, the upcoming European earnings season and next week’s ECB meeting are among other factors that could impact the markets. With the ECB unlikely to further loosen its policy amid rising inflation, I am struggling to come up with reasons why European stocks should go up in a meaningful way. Consequently, a sharp correction of some sort would not come as a surprise to me. In fact, the leading European stock indices are looking shaky from a technical perspective already...

The UK’s FTSE 100 (figure 1), for example, has broken several support levels and is now hovering dangerously around the key 7100 handle (or 7090-7130 area to be a little vague). This level had previously been key support and resistance. Thus, a potential break below here could potentially lead to a significant correction. Some levels of support to watch in the event of a breakdown include 6995, 6685 and 6380 – levels which were formerly resistance.  But there is a potential for a bounce around the current level of 7100 given the extent of the recent declines. However, with many short-term support levels broken down, there will be plenty of new resistance levels that may then stand on the way of any short term bounces, including at 7200, 7260 and 7300.

The other European stock index that will be in focus for obvious reasons this week is the French CAC 40 (figure 2). This index is also looking weak as far as the short-term technical outlook is concerned. As well as breaking a short-term bullish trend line, it has taken out key support at 5055-65, an area which has turned into a bit of resistance after this morning’s bounce. If the CAC breaks the next support at 4980 then we may very well see a deeper correction in the days to come, especially if the potential breakdown is accompanied by a shock election outcome in France. It should be noted that a possible closing break above 5055-65 area today would bolster the bullish case slightly. 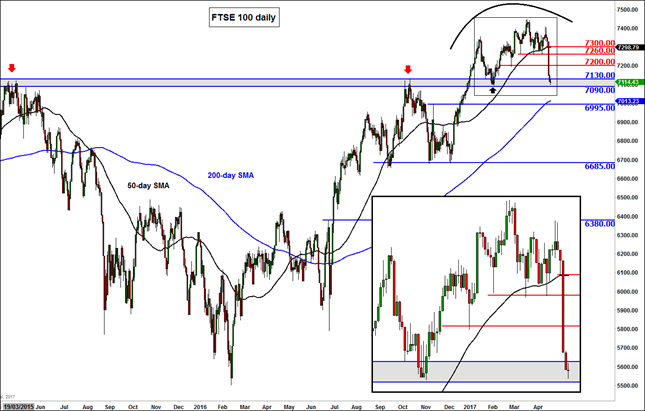 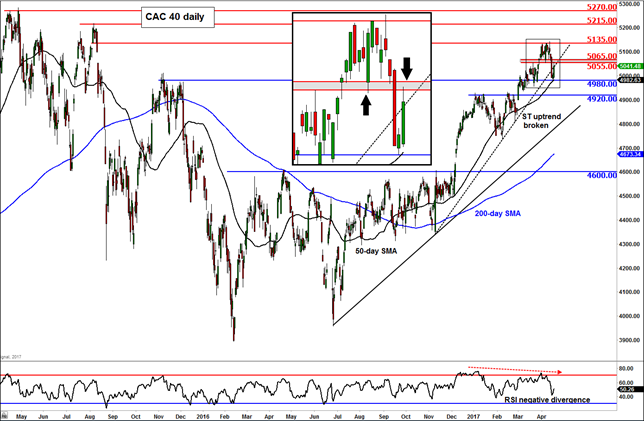