<p>Below we have a daily chart of the EUR/AUD. Similar to the EUR/USD, consolidation is the name of the game. But within the consolidation, it looks like a new trend is emerging, at least for the EUR/AUD anyway. There are lots of factors to observe in this chart.</p>

Below we have a daily chart of the EUR/AUD. Similar to the EUR/USD, consolidation is the name of the game. But within the consolidation, it looks like a new trend is emerging, at least for the EUR/AUD anyway. There are lots of factors to observe in this chart.

Let’s start with the secondary indicators first. The MACD is trending lower below its signal line and is moving below zero. Meanwhile, the RSI – having already formed bearish divergence – has broken below a short-term bullish trend and is moving towards 40 – below here would point to downward momentum. So, both of these momentum indicators are pointing to a breakdown in the underlying EUR/AUD currency pair.

Meanwhile the 50 and 200 daily moving averages are getting close to one another, too. And with the 50-day SMA flattening, this points to a potential "death crossover" soon. When the 50 is below the 200 SMA, some momentum traders would like to fade the rallies rather than buy the dips. For now however, they are still in the "right" order, so we shouldn’t jump into any conclusions.

The study of price action itself is, as ever, the most important indicator. On this front, the EURAUD’s repeated failure to rally above 1.6250 since August of last year, suggests price has formed a top; more precisely, a triple top reversal pattern. The last attempt to break above 1.6250 ended with the formation of a very nice doji candle at the highs. There, the RSI was also in a state of bearish divergence. Obviously hindsight is a wonderful thing, but the power of the rejection there can still be ‘felt’ – look, for example, at how aggressively price has moved lower following that rejection.

At the time of this writing, the EUR/AUD was hovering around the pivotal 1.5250 level, which had been strong support and resistance in the past. Price was also holding above the 200-day SMA. The hesitation here is not a major surprise given the extent of the downward move we have seen already. Put another way, bearish speculators are probably taking some profit here. But the lack of a significant bounce so far suggests that price may break further lower over the coming days.

If the EUR/AUD breaks down as the above technical indications suggest, the next potential bearish targets could be the 61.8% Fibonacci retracement at 1.5080, followed by the psychologically-important 1.50 handle and then the bullish trend line at around 1.4750. This technical bearish setup would become invalid in the short-term if resistance at 1.5500 breaks on a daily closing basis. The longer term outlook would still remain bearish for as long as price holds below the 1.6250 ceiling.

Finally, given the growing divergence of monetary policy stance between the RBA and the ECB, the fundamentals meanwhile also point to lower levels for the EUR/AUD – especially if the ECB decides to expand its QE programme in March. 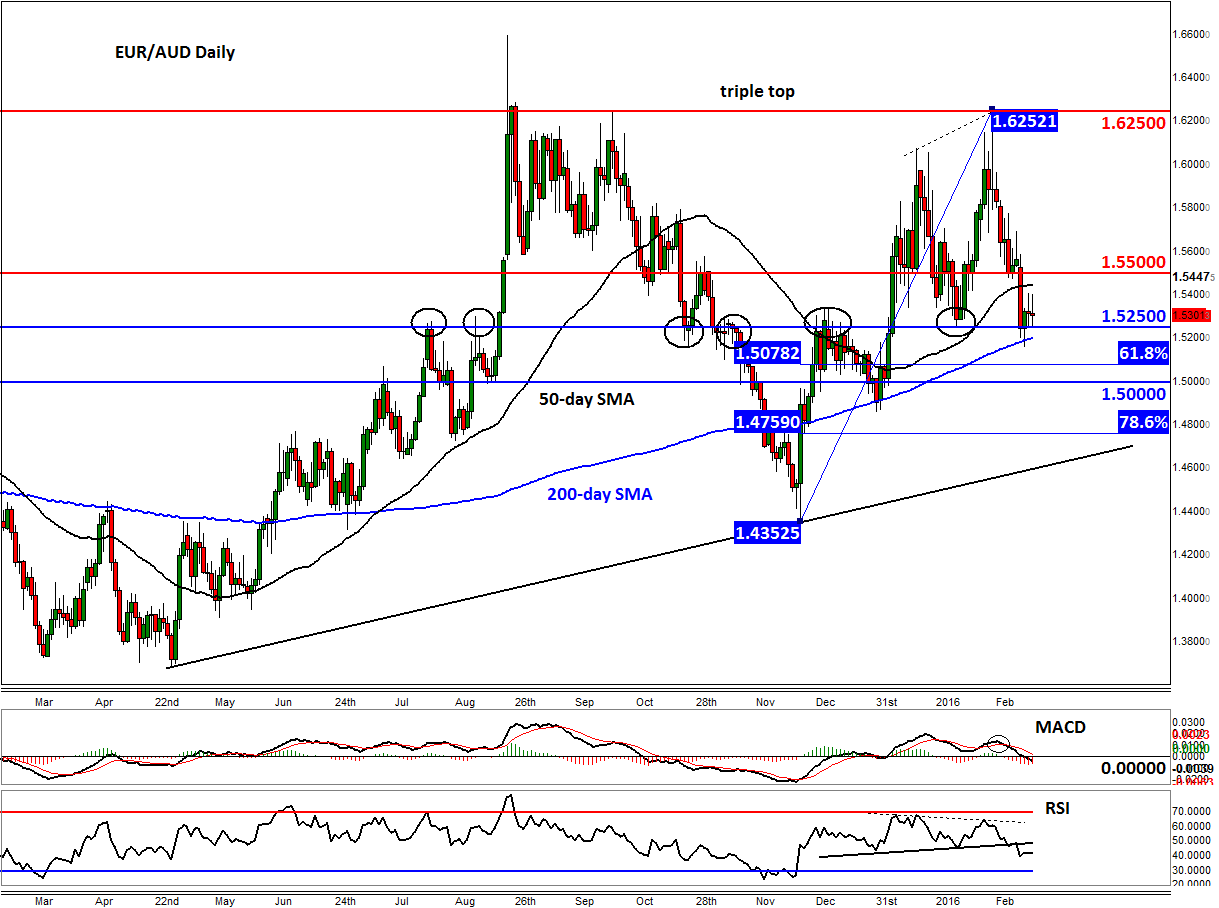