EUR/GBP poised for possible breakout ahead of BoE

As of Wednesday, EUR/GBP has been consolidating in a clear triangle/pennant technical pattern for the past two weeks after hitting a one-year high slightly above 0.7750 resistance in January.

That high was the most recent culmination of a sharp bullish trend that has been in place for the past two months, since the 0.7000-area lows in late November.

The current triangle consolidation pattern can be considered a pullback within the context of the strong uptrend, and could potentially presage a continuation of the uptrend on any significant breakout above the pattern.

This week brings important economic events, especially on the UK side, that may either help or hinder a possible upside break. On Thursday, the Bank of England (BoE) will release its key interest rate decision and monthly monetary policy summary, along with its inflation report. Although the BoE is not expected to raise interest rates during Thursday’s meeting, the content of the monetary policy summary will be closely watched for any hints of dovish/hawkish nuances. The BoE’s inclination to follow the Federal Reserve’s lead in raising interest rates is already shrouded in increasing doubt and uncertainty. With the recent Bank of Japan move to cut interest rates into negative territory, this doubt could well be amplified. If this is the case, and Thursday’s BoE policy summary is seen as even more dovish than expected, this could lead to a significant drop for the British pound and a corresponding breakout surge for EUR/GBP.

Also on Thursday, European Central Bank (ECB) President Mario Draghi is due to speak at a lecture in Frankfurt. Any hints of the ECB’s evolving monetary policy stance that might emanate from that lecture could also move the currency pair.

In the event of a sustained breakout above the upper border of the triangle pattern, currently around the 0.7600 resistance level, the next major upside target remains at the noted 0.7750 resistance level that was reached in January. Any further extension of the entrenched uptrend could then target further key resistance around the 0.7900 level. 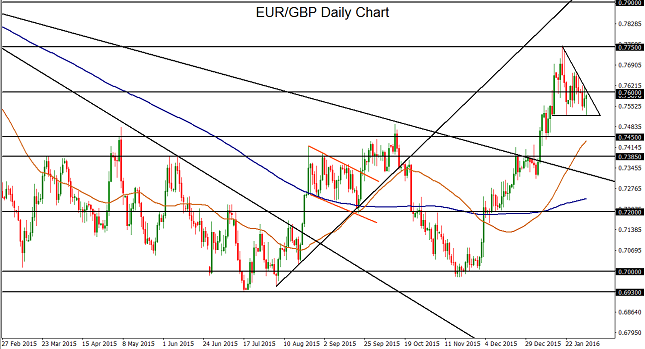