EUR/GBP pressure grows ahead of ECB, despite soft UK data

<p>The outcome of the European Central Bank’s latest policy decision is due on Thursday. Having just expanded QE at the last meeting in March, the ECB is unlikely to alter its policy further at this meeting. Investors will therefore focus on Mario Draghi’s comments, in particular for any hints on cutting the deposit rate further into negative territory in the future, something the ECB head had suggested would not happen. If there is a U-turn in this regard, then the euro could come under renewed pressure.</p>

The outcome of the European Central Bank’s latest policy decision is due on Thursday. Having just expanded QE at the last meeting in March, the ECB is unlikely to alter its policy further at this meeting. Investors will therefore focus on Mario Draghi’s comments, in particular for any hints on cutting the deposit rate further into negative territory in the future, something the ECB head had suggested would not happen. If there is a U-turn in this regard, then the euro could come under renewed pressure.

In fact, the euro has already weakened in recent days, most notably against the pound which has rallied despite the on-going Brexit concerns. Today, the pound was able to hold its own relatively well even though the latest jobs data from the UK disappointed expectations. Here, unemployment rose for the first time in seven months, applications for jobless claims showed a surprise of 6,700 and the three-month average rise in wages including bonuses of 1.8% was below expectations. However, it wasn’t all doom and gloom as wages excluding bonuses rose by a better-than-expected 2.2% and the unemployment rate remained unchanged at 5.1% as had been expected. The EUR/GBP nonetheless weakened. The cross will remain in focus for the remainder of this week because of the ECB’s meeting tomorrow and more economic data from both the UK and the Eurozone: UK retail sales are due tomorrow morning while the latest manufacturing PMI figures from the Eurozone are due for publication on Friday.

As mentioned, the EUR/GBP has continued to retreat after forming its first bearish weekly candlestick pattern in six last week at major long-term resistance zone between 0.8030 and 0.8100 (area shaded in red on the daily chart, below). As discussed previously, this area marks the convergence of several technical indicators, including the resistance trend of a long-term bearish channel, previous highs and several Fibonacci levels.

At the start of this week, the EUR/GBP has formed a couple more bearish patterns. On the daily chart, one can see a clear inside bar failure on Monday: price momentarily broke above the 0.7980 resistance level, trapped the bulls, before heading decisively lower to form an inverted hammer candlestick formation. On Tuesday, there was some further follow-through in the selling pressure, which helped to erode the bullish trend line. Today, the EUR/GBP has closed the gap on the flattening 50-day moving average at 0.7860. The gap between the 50- and 200-day moving averages may soon shrink if price falls further.

Below the 50-day average, the next immediate potential support levels or bearish targets to watch are as follows:

The bearish outlook on the EUR/GBP will become invalid should price form a decisive bullish pattern, or rally back above the broken 0.7930 support-turned-resistance level. Until and unless that happens, the path of least resistance for the EUR/GBP remains to the downside. Meanwhile the momentum indicator RSI is still some way off the "oversold" level of 30, suggesting that further weakness could be seen over the next several days. 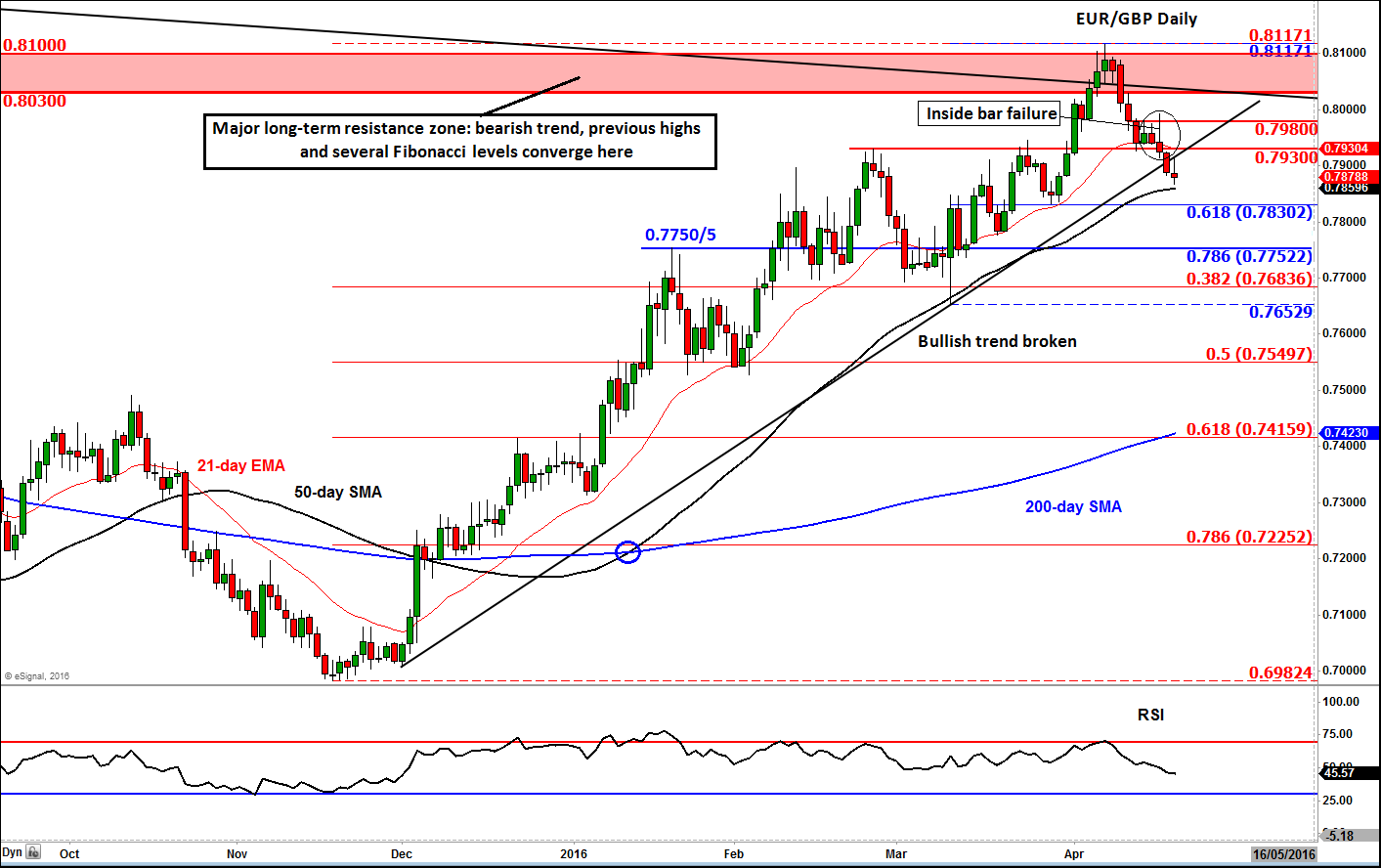