The sharp rise in the euro for the past two weeks has been fueled by several factors, including the dissipation of political risk after the euro-supporting French elections in early May, general improvements in eurozone economic data, and rising inflation readings within the euro area. In turn, these conditions have raised speculation that the European Central Bank may begin to tighten monetary policy sooner rather than later, which boosts the outlook for the shared currency.

The sharp rise in the euro for the past two weeks has been fueled by several factors, including the dissipation of political risk after the euro-supporting French elections in early May, general improvements in eurozone economic data, and rising inflation readings within the euro area. In turn, these conditions have raised speculation that the European Central Bank may begin to tighten monetary policy sooner rather than later, which boosts the outlook for the shared currency.

The euro’s surge within the past two weeks has been most pronounced on EUR/USD, as the US dollar has experienced a sharp pullback within the same period of time. But EUR/GBP has also seen a steep climb, as the British pound has recently been lagging amid uncertainties surrounding the UK snap elections set for early June, as well as a long road ahead of difficult Brexit negotiations for the UK.

In the next two days, a couple of events could further impact EUR/GBP price action, including Wednesday’s speech by ECB President Mario Draghi in Spain and Thursday’s second UK GDP estimate for the first quarter.

On Tuesday, EUR/GBP’s two-week rise encountered some key resistance around the intersection of two major trend lines – 1) a descending resistance trend line extending from October’s 0.9100-area highs, and 2) the underside of a longer-term rising trend line extending all the way back from late 2015. The intersection of these lines, currently around the 0.8650 price level, is tentatively serving as technical resistance to further gains for the currency pair. If EUR/GBP manages to hold below this trend line intersection, the currency pair could see some of its recent gains pared back towards the 0.8500 and 0.8400 support levels. 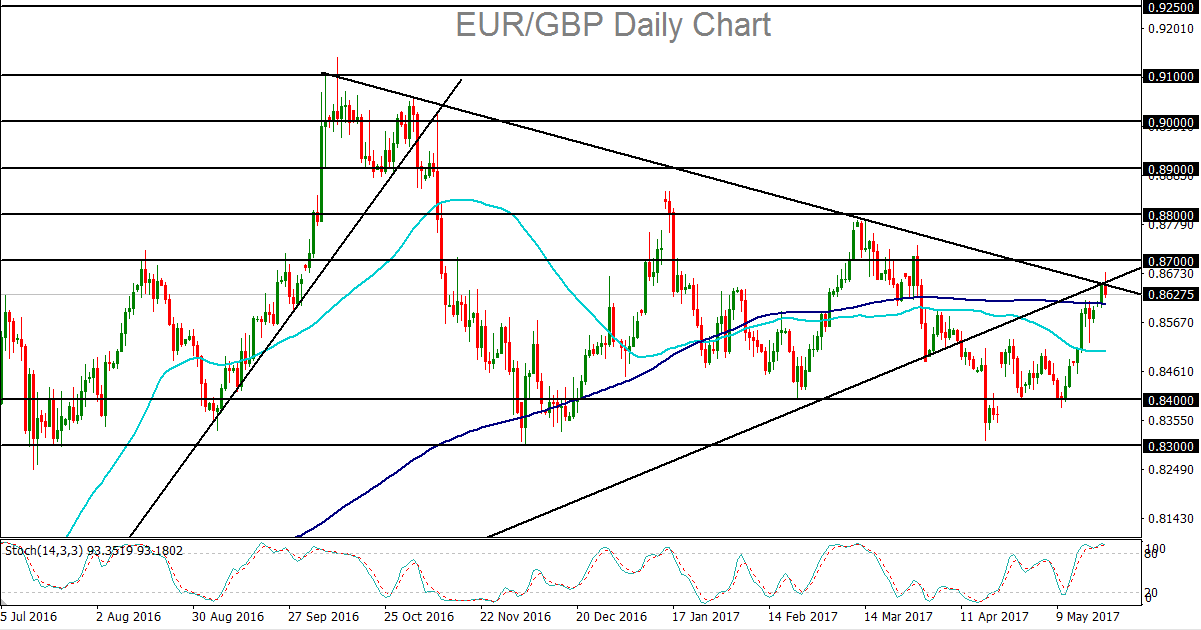