Amid the euro’s pullback this week from long-term highs against both the US dollar and Japanese yen, the Bank of Japan reduced its purchases of Japanese government bonds on Tuesday, leading to some knee-jerk speculation that the central bank could wind down its massive stimulus program at some point in the foreseeable future.

Amid the euro’s pullback this week from long-term highs against both the US dollar and Japanese yen, the Bank of Japan reduced its purchases of Japanese government bonds on Tuesday, leading to some knee-jerk speculation that the central bank could wind down its massive stimulus program at some point in the foreseeable future. In turn, this speculation provided a sharp boost for the Japanese yen, despite the BoJ’s frequent insistence in the past that it would not be ending its stimulus purchases any time soon.

Amid the yen’s surge against its rivals, doubts about the European Central Bank’s own trajectory of monetary policy tightening have begun to weigh on the euro as concerns over lagging inflation in the eurozone have emerged once again. This combination of a stumbling euro and BoJ-driven surge in the yen prompted a further drop for EUR/JPY on Tuesday from its 2+ year high of 136.62 that was reached late last week.

The directional bias for EUR/JPY going forward will depend to a large extent upon expectations regarding the comparative pace of monetary policy tightening and stimulus tapering between the ECB and BoJ. On a shorter-term horizon, EUR/JPY technicals are currently displaying a sharp pullback from overbought levels. This pullback reached a low on Tuesday around the key 134.00 support area before making a modest rebound that pared some of those losses. Any further subsequent pullback below 134.00 in the short-term could open a path towards the key downside target around the 132.00 support area, the level of the last major low back in mid-December. 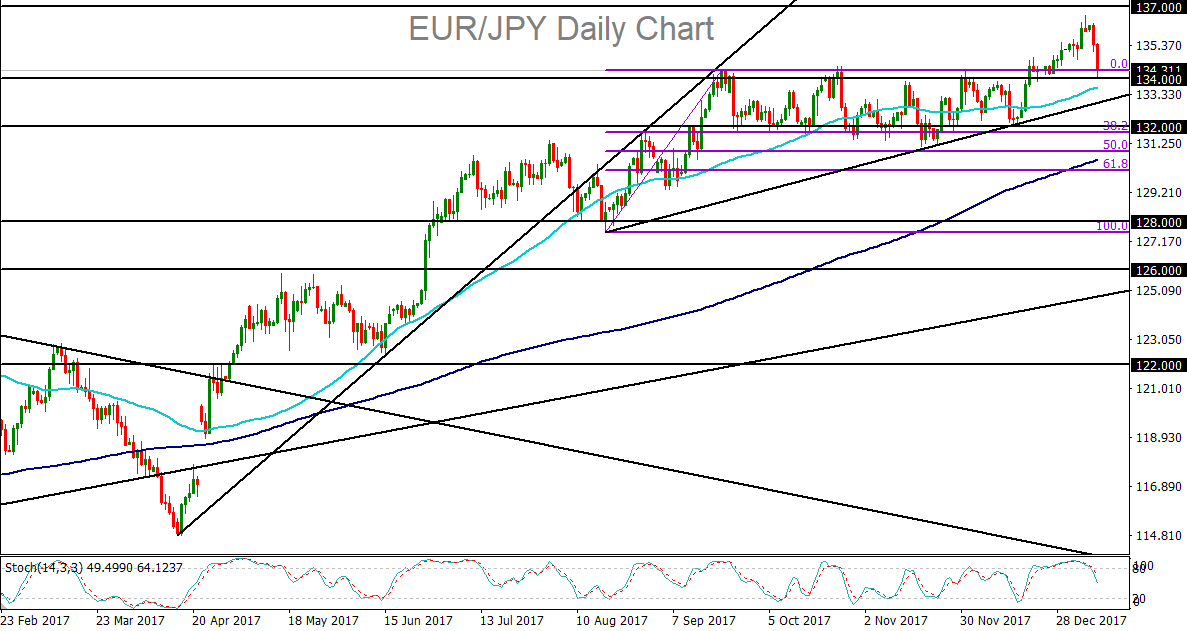