Despite last week’s reports that the Bank of Japan (BoJ) was considering potentially more aggressive easing actions in the form of additional stimulus measures, which had led to an immediate drop in the yen and a significant boost for both USD/JPY and EUR/JPY, Japan’s central bank issued its decision on Thursday that it would hold off on any monetary easing. Interest rates remained unchanged and the BoJ was seen as taking the unexpected path of non-action, with nothing in the way of guidance or indication of any future action. This prompted an exceptional surge for the Japanese yen and corresponding plunges for both USD/JPY and EUR/JPY.

This further strengthening of an already soaring yen is undoubtedly problematic for the Bank of Japan, and continues to beg the question of when the central bank will intervene with measures to weaken its currency. But it also presents the equally valid question of whether any intervention measures implemented by the BoJ would actually be effective in stemming yen strength. When the central bank pushed interest rates into negative territory in late January, the yen initially tumbled according to plan. Immediately thereafter, however, the currency embarked on a period of major strengthening for the ensuing months.

In the case of EUR/JPY price action, the rise in the currency pair on reports of potential easing followed by the subsequent plunge on the BoJ’s actual decision is somewhat reminiscent of that rise in late January around the central bank’s foray into negative rates followed by the extended fall that resulted. The only major difference is that the current drop has begun in a significantly more severe manner.

Current yen strength has pushed EUR/JPY back down to re-approach major support around 122.00, which is the level of the recent double-bottom low. This double-bottom developed with the first 122.00-area low occurring in late February and early March, and the second one having been established just last week after hitting a new three-year low. Since mid-year of last year, EUR/JPY has been forming a clearly-defined downtrend with progressively lower highs and lower lows. Any breakdown below the noted 122.00 support level would confirm a continuation of this bearish trend and could likely lead to a significant extension of the downtrend. With any such breakdown, the next major downside target resides at the key 119.00 support level. 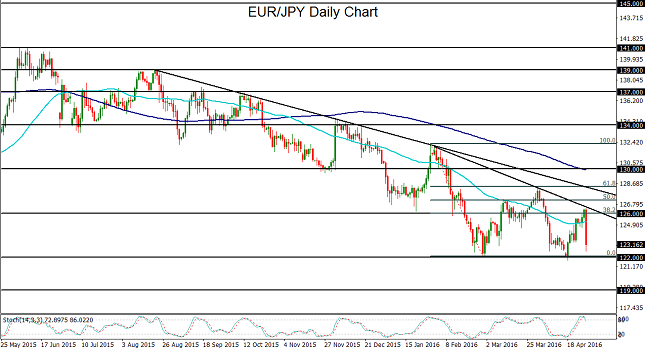