<p>The US dollar is attempting to make a comeback after being hammered on Friday on the back of a very poor jobs report from the world’s largest economy. The dollar bears are worried that the Fed’s Janet Yellen may spoil the party for them in a speech later today as she may stand firm on her recent call that a rate hike in “coming months” is still likely. After all, some would argue that one month’s worth of data is insignificant and that there is a danger the Fed will be losing (more) credibility if it once again backtracks on its promise of raising rates.</p>

The US dollar is attempting to make a comeback after being hammered on Friday on the back of a very poor jobs report from the world’s largest economy. The dollar bears are worried that the Fed’s Janet Yellen may spoil the party for them in a speech later today as she may stand firm on her recent call that a rate hike in "coming months" is still likely. After all, some would argue that one month’s worth of data is insignificant and that there is a danger the Fed will be losing (more) credibility if it once again backtracks on its promise of raising rates.

However, the market’s expectations for a rate hike in June has dropped sharply following Friday’s jobs report and according to the CME Group’s FedWatch tool, which tracks the changes in the federal funds futures, the probability of a ¼ percentage point rate hike is just 3.8% now. The odds of a move in July have been slashed to just 30 per cent.

So there is a real danger that the market may be under-pricing the odds of a rate increase in June or July, which would imply that a sharp rally in the dollar may be forthcoming if Yellen delivers a hawkish assessment of the economy around 17:30 BST (12:30 ET). However if she sounds dovish then the dollar will most likely fall further.

The dollar has advanced most profoundly against the British pound which has slumped as fresh polls at the weekend put the "Leave" camp ahead in the run up to the UK-EU vote. The euro meanwhile has fallen on the back of poor German factory data where the total value of new purchase orders placed with manufacturers fell by a surprisingly large 2.0 per cent month-over-month in April. However the losses have been limited for the euro, in part because of today’s other key data which was better than expected: the Sentix Investor Confidence. This barometer, despite raised Brexit risks, rose by a larger than expected 3.7 points to 9.9 at the start of this month.

Following Friday’s very bad US jobs report, the EUR/USD took out a key short-term resistance level around 1.1215 before rallying hard into 1.1350-70, an area which was formerly support and resistance. There is a danger that this key area may once again turn into resistance, potentially leading to a pullback towards the broken 1.1215 level. Alternatively, a break above 1.1350/70 could see the euro extend its advance towards the 61.8% Fibonacci retracement level at just shy of 1.1420 or higher still towards the 1.1465-1.1505 area (old resistance and 78.6% retracement)

Understandably, the short-term oscillators have now reached ‘overbought’ levels and will need to unwind either through time (bullish) or price action (bearish). But the daily RSI is still not near its extremes, so on this time frame there’s room for further gains before the EUR/USD becomes overbought. 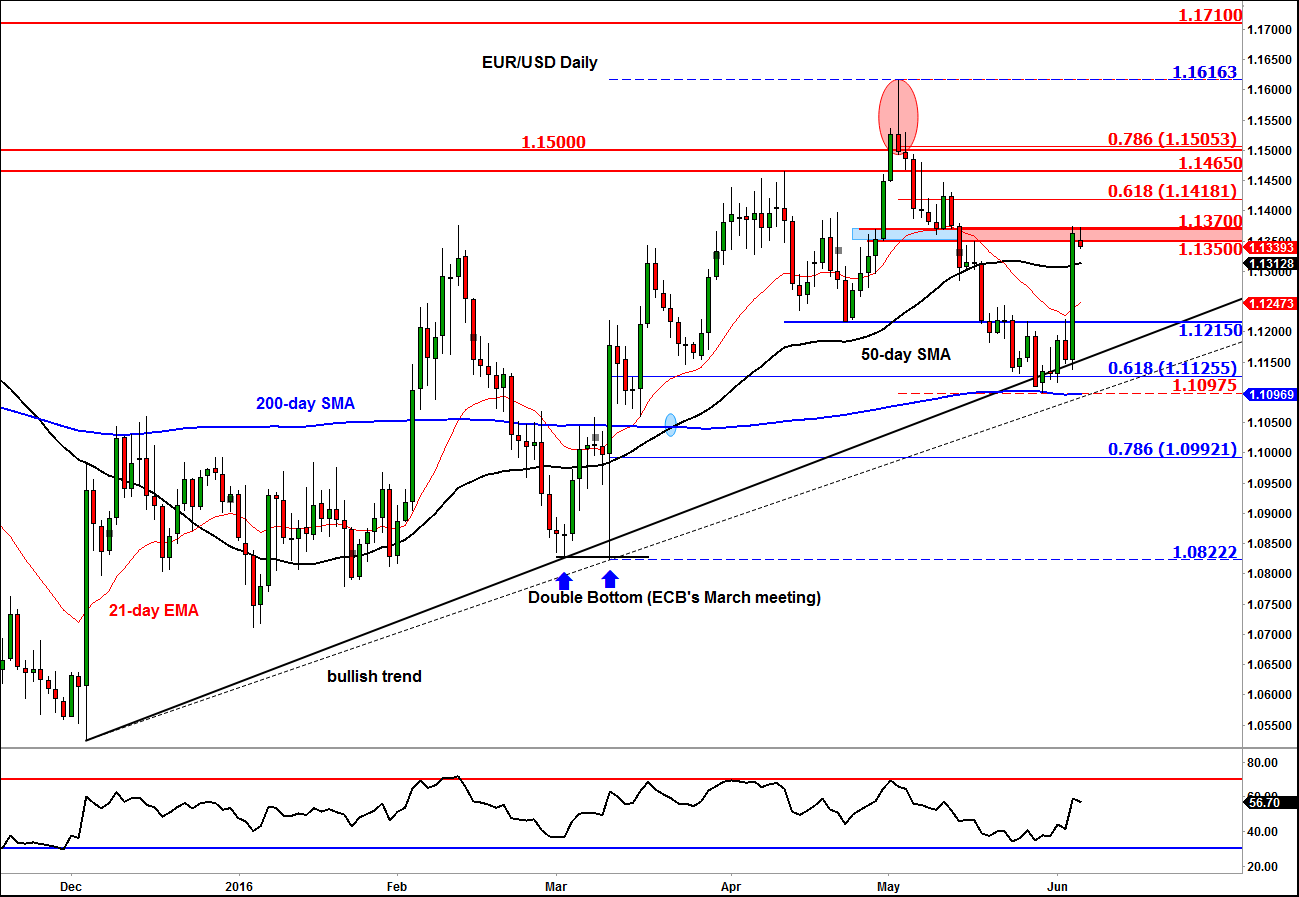