EUR/USD coiled in a tight range ahead of Fed, Euro GDP, US jobs, French election

Potentially affecting the dollar most directly this week will be Wednesday’s FOMC decision, which comes at the conclusion of the Fed’s two-day meeting. Futures markets are pricing-in less than a 5% probability of a rate hike at this meeting, which supports the very high likelihood that interest rates will be kept steady. Markets will be focused instead on any indications surrounding both the potential trajectory of rate increases going forward as well as the Fed’s recently-discussed intentions to shrink its massive balance sheet.

Also affecting the dollar will be the US jobs report on Friday, which includes the heavily anticipated non-farm payrolls report for April. After the previous month’s highly disappointing 98K jobs added in March against 175K expected, the current forecast for April’s gain in jobs is around 195K. Before the actual number is revealed, however, Wednesday’s ADP private jobs report should give a taste of what April’s employment landscape might have looked like. ADP is expected to report around 178K private, non-farm jobs added in April.

A major data release potentially affecting the euro side of the currency pair is Wednesday’s euro area GDP. Euro GDP for the first quarter is expected to come in at 0.5%. If this number is hit or exceeded, it will place the eurozone in a highly positive light against the significantly weaker economic growth data released by the US last week. The opposite, of course, could also be true if euro area growth fails to meet expectations.

Finally, there is the long-awaited, but increasingly anti-climactic final round of the French presidential election on Sunday. As the market-safe candidate, Emmanuel Macron, continues to poll around 20 points ahead of his far-right, anti-EU opponent, Marine Le Pen, the second-round election has diminished in its potential market impact. Latest polls have seen Le Pen narrow the gap slightly, but Macron still leads at around 60% to Le Pen’s 40%. Much of the optimistic Macron-rally in the euro that occurred after the first round may have already priced-in a Macron victory, although there could indeed be further room for upside should the centrist candidate win as expected. The real risk lies in the highly unlikely scenario of a Le Pen win. Such a surprise would almost certainly result in a very substantial plunge for the euro.

Amid this deluge of events potentially affecting both the US dollar and euro, EUR/USD continued on Tuesday to maintain a rather narrow equilibrium. With any one or combination of the upcoming events having a clear potential to prompt a breakout of consolidation for the currency pair, EUR/USD is at a critical technical juncture. Any upside breakout above key resistance around 1.0950 could go on to target the 1.1100 resistance level. To the downside, major support lies around the 1.0800 level. A sustained break below 1.0800 at the current time is not exceedingly likely, unless eurozone GDP falls significantly short of expectations, or even worse for the euro, Le Pen wins the French presidency. 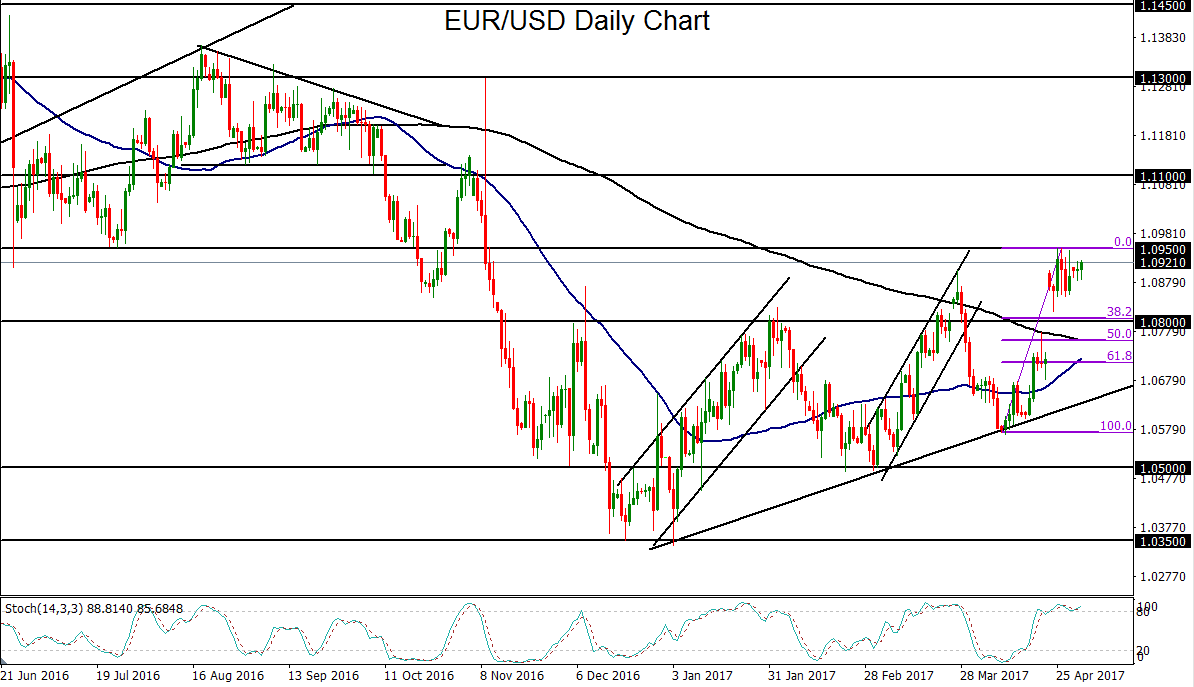