<p>The world’s most widely-traded currency pair has garnered its fair share of headlines over the last week, but heading into this afternoon’s monetary policy announcement from the Federal Reserve, EUR/USD could be poised for another big move.</p>

The world’s most widely-traded currency pair has garnered its fair share of headlines over the last week, but heading into this afternoon’s monetary policy announcement from the Federal Reserve, EUR/USD could be poised for another big move.

As we noted in yesterday’s FOMC preview report, the US central bank will almost certainly leave monetary policy unchanged, but the tone of the accompanying statement, summary of economic projections, and press conference could still influence the market’s expectations for interest rates in June and beyond.

While its always difficult to handicap which direction Fed Chairwoman Janet Yellen and company will lean, the aforementioned EUR/USD is setting up for a potentially sharp move regardless of how traders interpret the Fed festitivities. On a technical basis, the pair has been consolidating in an increasingly tight falling wedge / bullish flag pattern since last week’s ECB meeting reaction. The technical analysis textbooks will tell you that both of these patterns tend to lead to bullish breakouts, but readers should have a healthy appreciation for the massive impact that central banks exert on the market by now.

If the Fed comes off as more dovish than traders were expecting, EUR/USD may see a bullish breakout above trend line resistance at 1.1100. In that case, a quick move up to last week’s resistance around 1.12 seems likely, and if that barrier is conclusively broken, the pair may rally toward 1.1300 or even 1.1400 in the coming days. On the other hand, a hawkish surprise from the world’s most important central bank would likely take out support in the 1.1060 level and unwind all of  last week’s post-ECB rally on the way back down toward 1.0900.

Either way, FX traders should be even more keyed in to EUR/USD’s movements than usual this afternoon. 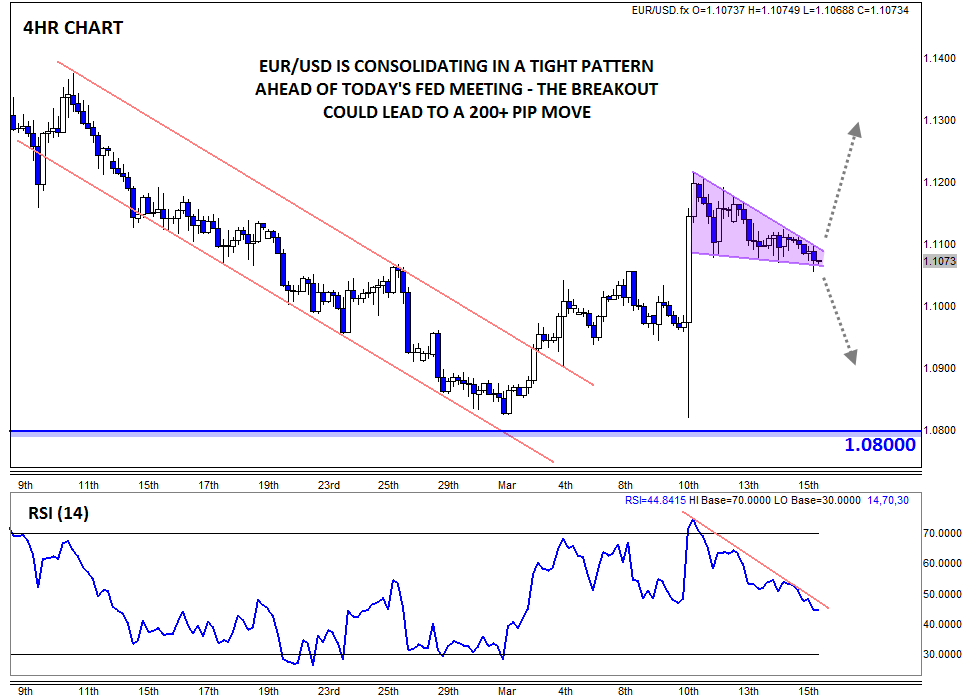