Share:
EUR/USD remained pressured on Thursday as it continued this week’s fall in the aftermath of last Sunday’s French presidential election. At the same time that Emmanuel Macron’s victory failed to extend the euro’s April rally, the previously battered US dollar began to stage a rebound this week. These factors have led to a sharp downturn for EUR/USD that has significantly pared the recent rally, bringing the currency pair closer to the April up-gap that occurred immediately following Macron’s first round election victory. Currently, the dollar appears to be driving much of the movement for EUR/USD, especially as US economic data continue to stimulate speculation over the Federal Reserve’s monetary policy trajectory. Key data releases set for Friday will contribute further to this dollar speculation.

In the afterglow of last week’s highly positive US jobs report, today’s US data releases also came out more dollar-positive than expected. The Producer Price Index (PPI) for April, a key inflation measure, gained 0.5% against a 0.2% forecast. The Core PPI (excluding food and energy) gained 0.4% versus 0.2% expected. Finally, weekly jobless claims for last week were once again better (lower) than expected at 236,000 claims against expectations of 245,000.

With any further positive results in US economic data on Friday and beyond, another boost for the dollar could push EUR/USD lower to begin filling April’s up-gap. Having just reached down to the 38% Fibonacci retracement of the bullish run from early April to early May, EUR/USD could soon be pressured down to the 50% retracement level, around the key 1.0800 support area. Any extended downside move could then target a key uptrend support line extending back to the lows from the beginning of the year, which is currently situated around the 1.0650 level. 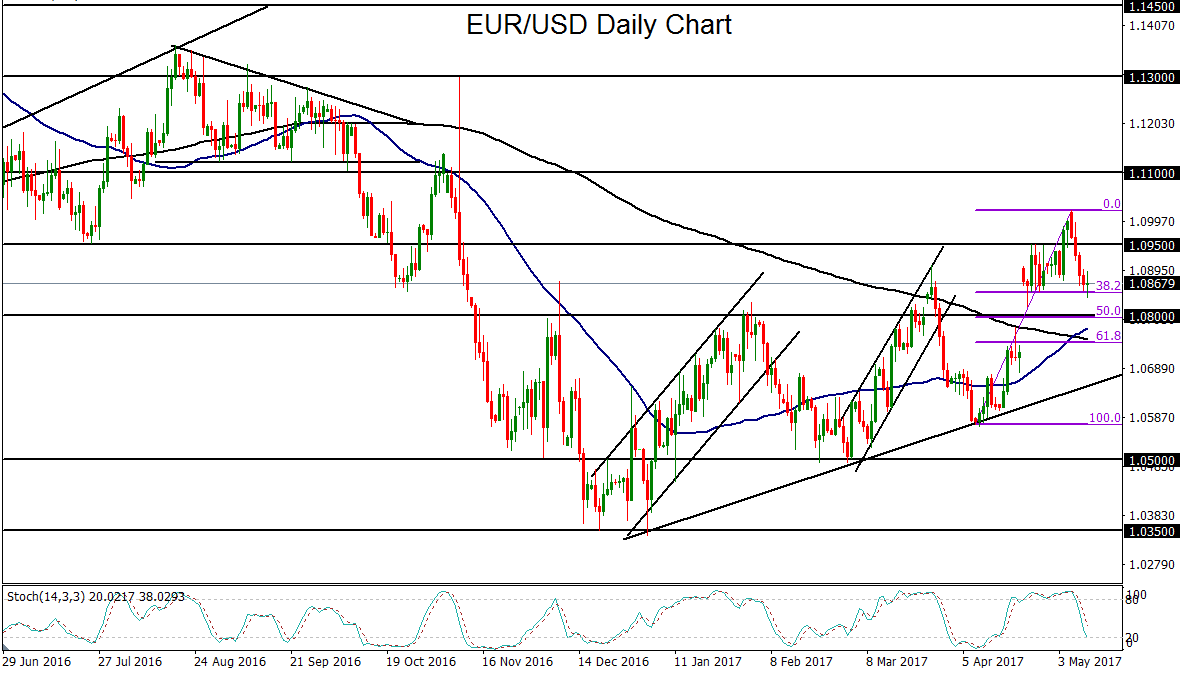