EUR/USD in the crosshairs ahead of busy week

On Monday, EUR/USD pulled back further from its new 3-year high above 1.2500 that was just established late last week. This pullback was driven in large part by a rebound for the US dollar on Monday, which followed the greenback’s sharp plunge for much of the past three weeks.

On Monday, EUR/USD pulled back further from its new 3-year high above 1.2500 that was just established late last week. This pullback was driven in large part by a rebound for the US dollar on Monday, which followed the greenback’s sharp plunge for much of the past three weeks. Looking ahead to the current week’s busy schedule of economic data and events from both the eurozone and the US, EUR/USD is likely to be significantly impacted.

Last week, aside from the sharp plunge for the US dollar that was driven in part by remarks made by US Treasury Secretary Mnuchin at the World Economic Forum in Davos, Switzerland, the euro was also boosted by an unexpectedly more hawkish European Central Bank. Although the ECB kept interest rates on hold as expected, there was increased optimism in ECB President Mario Draghi’s comments, even despite prior expectations that Draghi would attempt to talk down the high-flying euro.

This week out of the eurozone, key releases will include: preliminary flash GDP for the fourth quarter of 2017 (Tuesday, +0.6% expected) and CPI flash estimate year-over-year (Wednesday, +1.3% expected).

From the U.S., events that will dominate the schedule will include the first FOMC meeting of the year concluding on Wednesday, followed by the monthly US jobs report on Friday. The Federal Reserve is not expected to raise interest rates or make any substantive changes to monetary policy on Wednesday at the conclusion of its two-day meeting, but the Fed’s comments and outlook, as usual, will likely set the tone for monetary policy going forward into 2018. As for the jobs report, current expectations are hovering around 185K jobs added in January, after the relatively disappointing 148K jobs added in December.

Also out of the U.S., President Trump will be delivering his first State-of-the-Union address to the nation on Tuesday night, which could make a significant impact on the dollar. Rounding out the week for the greenback will be US ADP private jobs data on Wednesday (around 190K added jobs expected for January) and US ISM manufacturing PMI on Thursday (59.0 expected for January).

From a technical perspective, EUR/USD continues to trade within strong short-term and long-term uptrends. The key breakout levels to watch amid the major economic events and releases from the U.S. and eurozone this week include both the 1.2300 level to the downside and 1.2500 level to the upside. Any major breakout above 1.2500 resistance would confirm a continuation of the entrenched uptrend, potentially pushing the currency pair to new multi-year highs, while any sustained breakdown below 1.2300 support could then seek its next downside target around the 1.2100 support area. 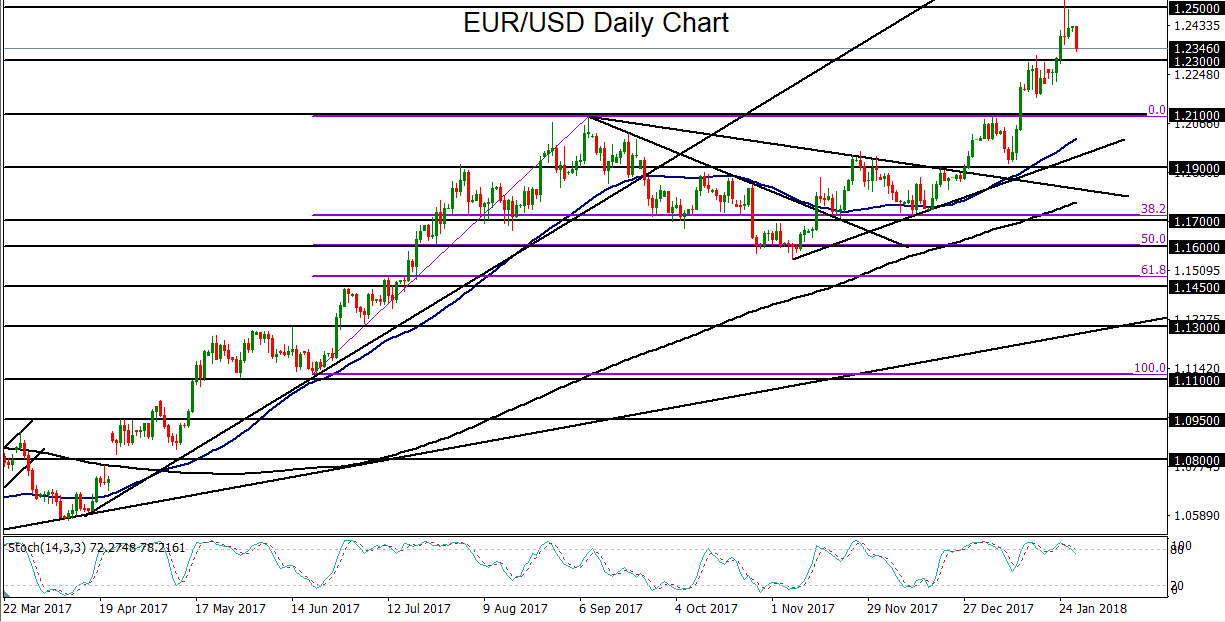