Share:
On the back of last week’s interest rate hike and hawkish-leaning statement by the Federal Reserve, New York Fed President William Dudley on Monday provided the markets with yet another vote of confidence that recently lagging inflation would pick up, justifying higher interest rates going forward. In a speech, Dudley asserted, "inflation is a little lower than what we would like, but we think that if the labor market continues to tighten, wages will gradually pick up, and with that, inflation will gradually get back to 2%."

These comments helped assuage dollar traders, who had been somewhat wary of the Fed’s hawkish stance given recent weaker-than-expected inflation and employment data. Since last week’s FOMC decision, the dollar has begun to stage a more meaningful rebound after having been heavily pressured for more than a month. The dollar’s latest attempt at a rebound has translated into what appears to be a rough topping pattern for EUR/USD.

Within the last month, EUR/USD has attempted to reach and breakout above the key 1.3000 psychological resistance level three times, only to be thwarted each time. The latest attempt was on the day of last week’s FOMC decision, which resulted in a dollar surge and EUR/USD pullback from resistance. That move formed a key reversal candlestick pattern – a shooting star candle, otherwise known as a pin bar – followed by a tentative breakdown below a key uptrend line extending back to April’s lows.

Though a EUR/USD rebound after that breakdown brought price action back up to the trend line, Monday’s resumed dollar strength pressured the currency pair back down again. Given EUR/USD’s failure to breach 1.3000 resistance and the subsequent trend line breakdown, dollar strength is currently driving downside momentum for EUR/USD. With any continued bullish momentum for the dollar and bearish momentum for EUR/USD off the breakdown, the next major target immediately to the downside is at the 1.1100 support level, followed further down by the key 1.1000 psychological support level. 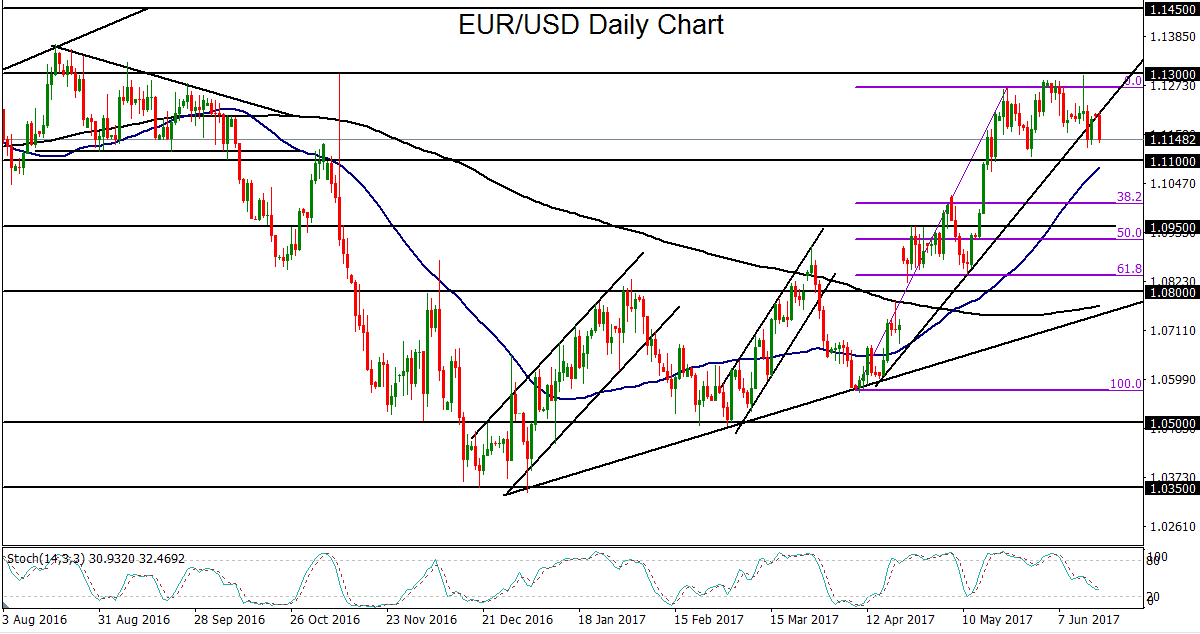