As the US dollar remained pressured and near a new 3-year low against a basket of other major currencies on Tuesday, the euro continued to be well-supported and resilient just off its own 3-year high against the dollar in the run-up to the heavily anticipated European Central Bank decision slated for Thursday.

As the US dollar remained pressured and near a new 3-year low against a basket of other major currencies on Tuesday, the euro continued to be well-supported and resilient just off its own 3-year high against the dollar in the run-up to the heavily anticipated European Central Bank decision slated for Thursday.

The euro’s continuing rise in recent months has been attributed in large part to strength in European economic growth that indicates potentially tighter monetary policy, a possible end to stimulus in the foreseeable future, and a generally more hawkish stance from the ECB. The central bank recently released its monetary policy meeting accounts from its last meeting in December. The minutes were seen as hawkish, as ECB officials hinted that tighter monetary policy, which includes the possibility of higher interest rates as well as the winding down of asset purchases, could be on the horizon amid an optimistic growth outlook for the euro zone. While inflation in the euro zone still remains below target, any hawkish signals on Thursday that may indicate steps towards further policy tightening could give the euro another boost.

Meanwhile, the US dollar has its own key events to anticipate. This Friday features the US advance GDP reading, which is expected to come in at an annualized 3.0%. And next week will potentially deliver an even greater impact on the dollar with the first Federal Reserve interest rate decision of the year occurring next Wednesday, followed by the US jobs numbers next Friday.

Ahead of these key events for both the euro and dollar, EUR/USD appears poised for a potentially major breakout to the upside, which would extend its year-long uptrend. For the past week, the currency pair has traded in a rather tight consolidation just below its multi-year highs and key resistance around the 1.2300 price level. With any sustained breakout above 1.2300, which would extend the longstanding bullish trend, the next major upside target resides around the key 1.2500 resistance level. 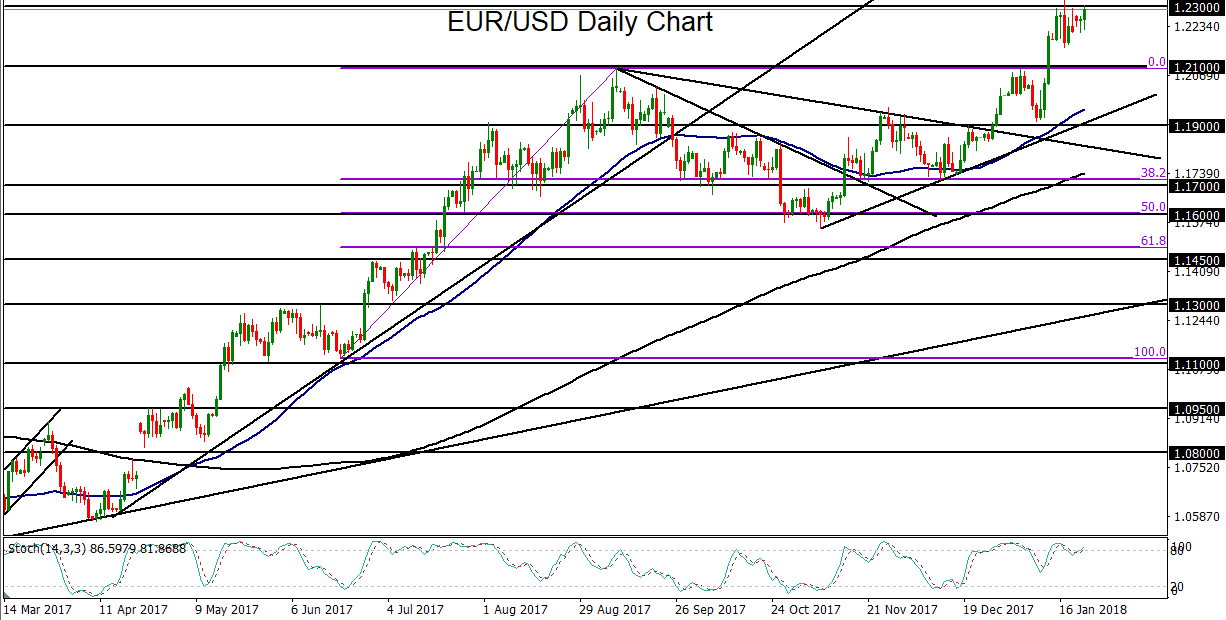