EUR/USD remains in strong uptrend ahead of Fed decision

A day before the Federal Reserve is slated to announce its latest monetary policy stance after concluding a two-day FOMC meeting, the US dollar continued to trade in an anticipatory holding pattern but has remained relatively pressured. For at least the past month, the dollar has been weighed down heavily against the euro, among other currencies, as relatively weaker-than-expected economic data has lowered expectations of aggressive policy tightening by the Fed after the highly-anticipated June rate hike.

A day before the Federal Reserve is slated to announce its latest monetary policy stance after concluding a two-day FOMC meeting, the US dollar continued to trade in an anticipatory holding pattern but has remained relatively pressured. For at least the past month, the dollar has been weighed down heavily against the euro, among other currencies, as relatively weaker-than-expected economic data has lowered expectations of aggressive policy tightening by the Fed after the highly-anticipated June rate hike.

Though markets are widely expecting a 25-basis-point Fed rate hike tomorrow, the US dollar has continued to struggle as the outlook for the near-future rate hike trajectory in the latter half of 2017 and beyond has diminished considerably. Even if the Fed raises interest rates as expected on Wednesday, the dollar could continue to be pressured if the Fed’s assessment of the economy and outlook for policy is as dovish as many market participants anticipate. Only if the Fed comes out with a surprisingly hawkish statement and press conference would the dollar likely buck its current downside trending bias.

In the absence of any such hawkish nuances, a weak dollar could continue to boost the EUR/USD currency pair, potentially extending the uptrend that has been in place for the past two months, since the 1.0570-area lows of early April. If this indeed becomes the case after tomorrow’s FOMC announcement, EUR/USD could finally breakout above the key 1.1300 psychological resistance level that it has struggled to reach and breach through late-May and early-June. As it currently stands, EUR/USD remains entrenched in the noted uptrend, as outlined by a key uptrend support line extending back to mid-April.

Clearly, dollar movement as a result of Wednesday’s FOMC decision and statement should be the primary short-term driver of EUR/USD price action for at least the next few days. In the event of a dovish Fed stance, even if interest rates are raised as expected, the US dollar is likely to experience further pressure, which should keep EUR/USD above the trend line and push the pair closer to the noted 1.1300 upside resistance level. If there is any further breakout above 1.1300, it would constitute a key technical event, in which case the next major upside target is around the 1.1450 resistance area. To the downside, a more hawkish-than-expected Fed stance on Wednesday should boost the dollar and potentially contribute to a further pullback for EUR/USD. If such a pullback results in a breakdown below the noted uptrend line, the clearest major downside target currently is at the key 1.1100 level. 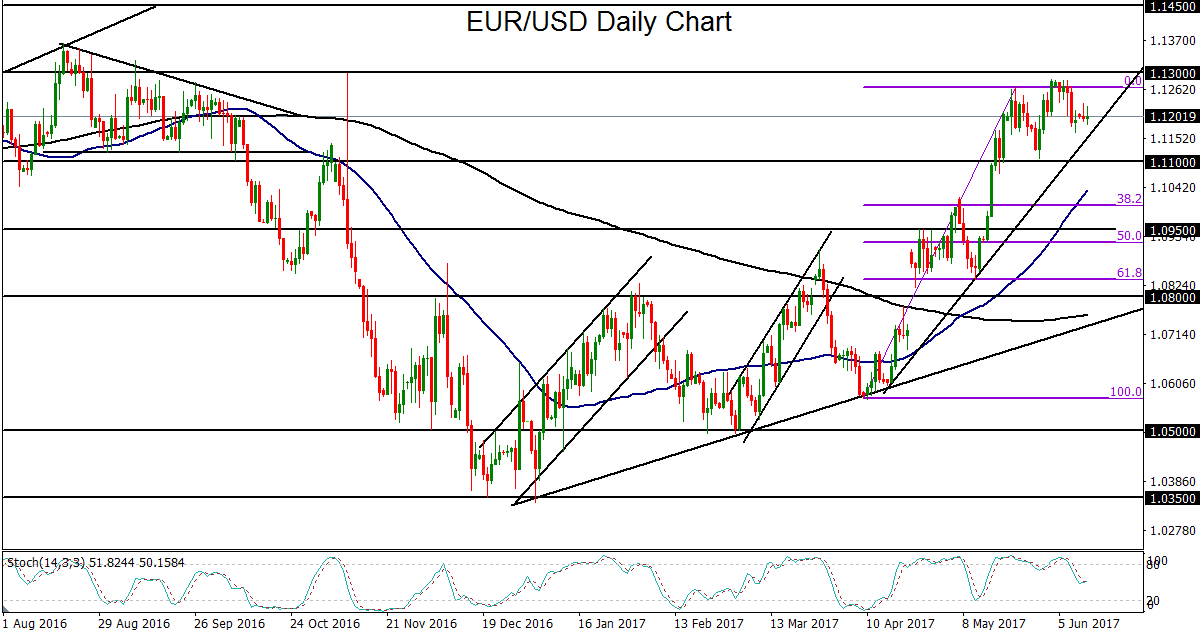