<p>Many traders are already looking ahead to the holiday weekend, so it’s difficult to expect much volatility from the remainder of this week’s trade, but there’s one key technical formation to keep an eye on both tomorrow and heading into next week.</p>

Many traders are already looking ahead to the holiday weekend, so it’s difficult to expect much volatility from the remainder of this week’s trade, but there’s one key technical formation to keep an eye on both tomorrow and heading into next week.

EUR/USD rocketed higher last week on the back of a more-dovish-than-anticipated FOMC meeting on Wednesday, but since then, the world’s most widely-traded pair has slowly but surely given back most of those gains. Ahead of the Fed meeting, we had noted the tight falling wedge pattern forming on the 4hr chart (see "EUR/USD coiling for a potential big move heading into the Fed meeting" for more), which added fuel to the fundamentally-driven bullish move.

As of writing, there’s another pattern forming on the EUR/USD’s 4hr chart, but this one has a slightly different connotation (not to mention the lack of an obvious fundamental catalyst until midway through next week). Since last Thursday’s high, rates have been consistently edging lower within a near-term bearish channel, and based on the price action alone, the unit shows no signs of breaking this trend any time soon.

That said, the 4hr RSI indicator has recently broke out of the top of its corresponding channel, though that’s partly due to the fact that it’s a bounded oscillator that, by definition, cannot trend in one direction indefinitely. For now, we’re inclined to give the short-term bearish channel a clean bill of health.

Assuming we don’t get any surprise moves tomorrow, one of the biggest questions on FX traders’ minds next week will be "how far will EUR/USD fall?" In our view, last week’s Fed meeting represented a significant change in the central bank’s outlook, and therefore, EUR/USD should logically be trading higher now than it was at the start of the last week. Therefore, we’d favor a bullish breakout and possible move back toward 1.1300 at some point next week (pending economic data, of course).

As always, price is the only thing that pays, so short-term EUR/USD traders may want to consider waiting until the unit has definitively broken the bearish channel one way or another before committing too aggressively. 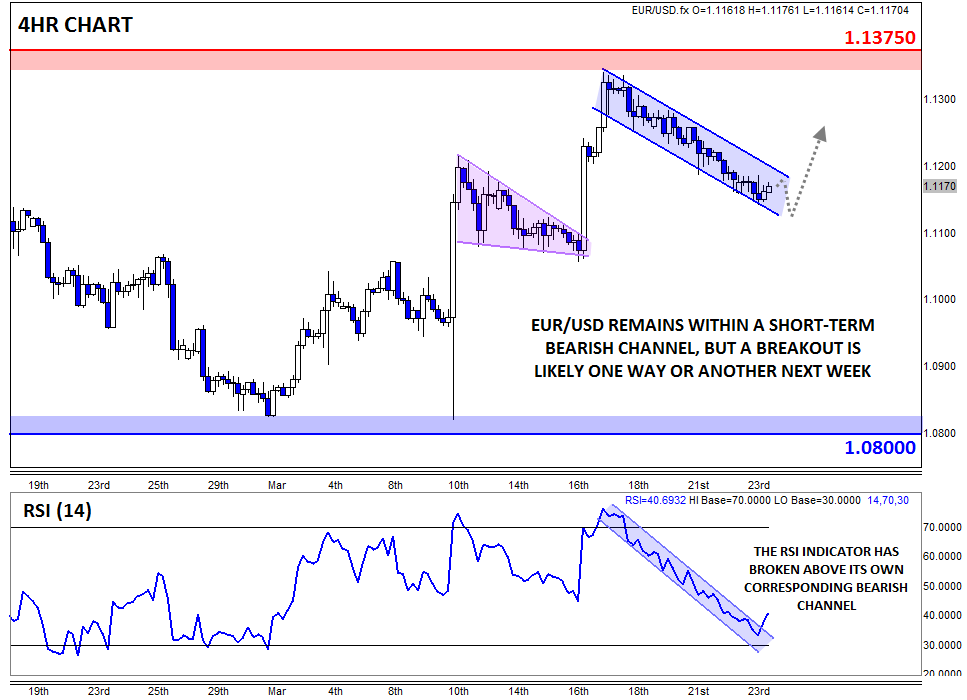