The EUR/CAD is an interesting FX pair to watch as it is currently testing a key technical area in the 100-pip range between 1.4735 and 1.4835

The EUR/CAD is an interesting FX pair to watch as it is currently testing a key technical area in the 100-pip range between 1.4735 and 1.4835. Why is this area so significant? Firstly because it was the last noticeable low prior to the rally in early December, which ultimately failed to sustain itself. Thus, if the buyers lose control of this zone then this would only boost the bears’ control. In addition, we have a number of other technical indicators which also converge in this zone, too. These include a bullish trend line, the 200-day moving average and the 38.2% Fibonacci retracement level of last year’s range.

So, if last year’s break above a key resistance at 1.5260 marked a break in market structure then the bulls would like to see the rally resume from here i.e. the 1.4735-1.4835 range. However, if support here breaks down then last year’s breakout above that 1.5260 level can be confirmed as a false move, which is a reversal pattern. So, given the importance of this 1.4735-1.4835 area, we could see a significant move once we know who comes out on top: the bulls or the bears?

A potential break below the abovementioned support range could see price drop sharply towards the 50.0 or 61.6 percent retracement levels next, at 1.4578 and 1.3990 respectively. Meanwhile resistance comes in at 1.4880 and 1.5000, levels which were previously support. If price breaks above these levels then the bulls would want to see a subsequent move above this year’s opening level at 1.5090. This potential scenario would be bullish, in which case we may see a subsequent rally to and possibly beyond last year’s high at 1.5270ish. 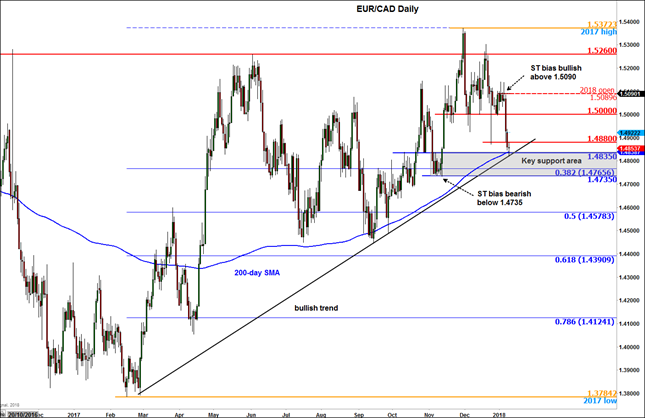