The euro finds itself higher across the board, including against the Canadian dollar ahead of the nation's inflation data...

The euro finds itself higher across the board. The EUR/USD has risen above the 1.0800 handle again, the EUR/GBP to 0.8650 and the EUR/JPY was back at 120.00 at the time of writing. The strong performance of the euro in recent times has been directly in response to market participants expecting tighter monetary conditions in the Eurozone, owing to an improving economy. So far, the ECB has talked down talks of tapering QE early. But with inflation rising and other macro pointers improving, the market has other ideas. Indeed, the sharp improvement in the latest PMIs for both the services and manufacturing sectors underscores this view. That being said, political risks remain high with the upcoming French elections. So far however this hasn't had a major impact on investor confidence. That could easily change of course, but if it will likely hit the European stock markets rather than the single currency, as it did during the height of the Greek debt crisis.

Looking ahead to the remainder of the day, we have some important inflation data from Canada. The Consumer Price Index (CPI) is expected to print +0.2 month-over-month in February after its unexpectedly sharp rise of 0.9% the month before. Inflation in Canada could well ease back if crude oil prices remain depressed after their recent falls. With oil being Canada’s number one export commodity, the Canadian dollar will probably remain under pressure regardless of the volatile month-over-month changes in CPI readings if crude remains depressed.

With strong Eurozone data and ahead of Canadian CPI, we are naturally drawn to the EUR/CAD today. Well, the EUR/CAD has been trending higher since the end of February after it created a false break reversal pattern around the 1.38 handle. It tried to break below that support level several times, but failed. From false breaks come fast moves in the opposite direction.  Consequently, traders flipped their positions and evidently went long. The rally from the 1.38 handle has caused to break several resistance levels, including the 50 and 200-day moving averages. The 50-day is now pointing higher, which is objectively telling us that the trend over the past 50-day period has been bullish. With the last resistance at 1.4355 level tuning into support on Thursday, price action remains, at least for now, bullish.

Based on current price action, we are therefore maintaining our bullish technical view on the EUR/CAD. We think that it may well be heading towards the 1.4615-35 area next, which was the last support pre-breakdown. However if there is a break in market structure of higher highs and higher lows, then expect the bullish trend to end. Specifically, a break below 1.4240 would be bearish. In this potential scenario, the EUR/CAD could drop to test 1.4100 before deciding on its next move. 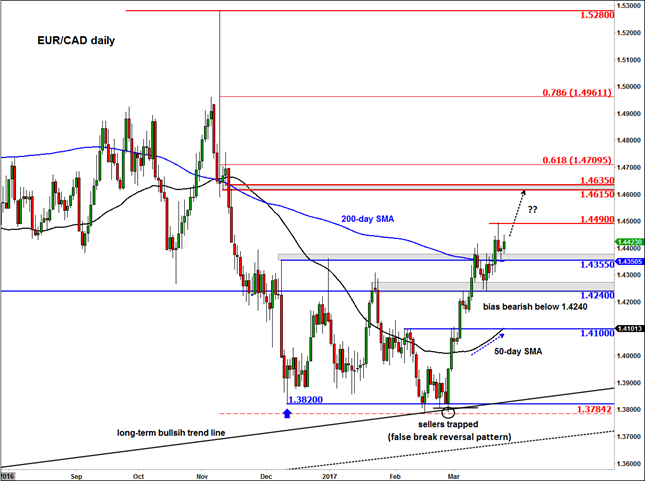