Despite oil’s massive rally on the back of the OPEC news, the Canadian dollar, which tends to correlate strongly with oil prices, has hardly moved against its major rivals. Indeed, the USD/CAD momentarily turned positive. The EUR/CAD is still down on the day, but it too has held its own relatively well. One has to wonder, if such an oil-bullish move was unable to underpin the CAD, what will?

Despite oil’s massive rally on the back of the OPEC news, the Canadian dollar, which tends to correlate strongly with oil prices, has hardly moved against its major rivals. Indeed, the USD/CAD momentarily turned positive. The EUR/CAD is still down on the day, but it too has held its own relatively well. One has to wonder, if such an oil-bullish move was unable to underpin the CAD, what will? Thus, the EUR/CAD could potentially bounced back if the Loonie were to weaken further this week, perhaps as a result of disappointing Canadian jobs data on Friday. It is also interesting to note that the EUR/USD is still clinging on to its multi-year support in the 1.05-1.06 area, despite the breakout in the Dollar Index. Therefore, the euro is looking strong on a relative basis, which is good news for the EUR/CAD bulls.

But for the EUR/CAD to turn bullish, it will first and foremost need to bounce back quickly here and break above the old support/resistance level of 1.4380. If this happens, only then can we expect to see the onset of a rally, potentially towards, if not beyond, the 1.4585-1.4630 area where we also have the 50- and 200-day moving averages coming into play.

HOWEVER this is not the first time the EUR/CAD has been at these levels. As can be seen from the chart, the pair came back to test the point of origin of its breakout from last December at 1.4160-1.4200 in April before bouncing back very strongly. Since then, several unsuccessful break down attempts were made. Now the sellers are having a real go as indicated by the tight consolidation above this area. Thus, if price finally breaks support here then we could see a quick sharp move lower, towards the bearish objectives at 1.4045 (old low), 1.3985 (127.2% Fibonacci level) and possibly even 1.3635-3685 (convergence of 161.8% extension and long-term 78.6% Fibonacci level).

So there you have it, two potential scenarios that could come to fruition this week. Conservative traders will want to wait for the EUR/CAD to make its move before trading in the direction of the breakout. It is also worth being wary of false breakouts and breakdowns – they happen quite regularly nowadays. 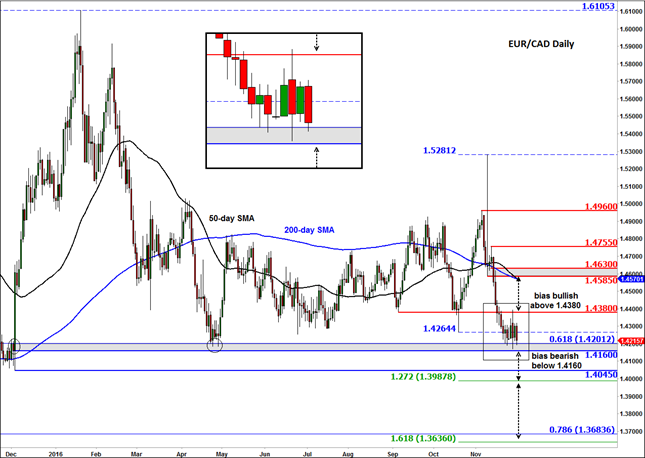