The SNB was surprisingly relaxed about the currency’s recent strength, once again describing the franc as merely being "highly valued."

After strengthening noticeably since May, the perceived safe-haven Swiss franc has eased back a little over the past few days as risk assets rallied on relief that the trade dispute between China and the US would ease. Evidently, speculators also trimmed their exposure to the franc in the event of a surprise from the Swiss National Bank, although virtually no one had expected it to alter its monetary policy which has been on hold for several years now. Prior to today’s meeting of the SNB, the market was keen to find out whether the central bank’s rhetoric around the value of the Swiss franc had changed. As my colleague Matt Weller pointed out on Friday of last week, the SNB described the currency as being “significantly overvalued” ten consecutive times after its infamous removal of the 1.20 EUR/CHF floor back in January 2015 when the cross was trading between 1.05 and 1.10. But after the EUR/CHF rose towards 1.15 for the September 2017 meeting, the SNB has categorised the value of the franc as merely “highly valued.” With Switzerland historically being a “neutral country,” traders had also wondered whether the SNB would invite criticism as a “currency manipulator” from the trade-obsessed Trump Administration.

Well as it turned out, the SNB was surprisingly relaxed about the currency’s recent strength, once again describing the franc as merely being "highly valued." Still, the SNB being among the most dovish central banks out there, would not dare give the wrong impression. So to offset the fact that it maintained the language on the Swiss franc, the SNB lowered its inflation forecasts for 2019 and 2020 while suggesting that "the pace of growth is expected to slow slightly."

With no hints of near term tightening, the SNB will surely not act before the ECB next year, so the EUR/CHF could start to climb higher again. But if the franc were to strengthen further and the EUR/CHF falls below 1.10 again then the SNB is very likely to intervene by scooping up euros and dollars aggressively. So, whichever way you look at it, the downside for the EUR/CHF looks to be limited. For now, though, the SNB seems happy with the current level of the exchange rate but it obviously prefers the EUR/CHF to be trading significantly higher, above 1.20.

Meanwhile from a technical perspective, the EUR/CHF has held - for the time being - the first of its key long term support levels at 1.12. As can be seen this was previously a major resistance level.

If rates start to show bullish price action here then we could see the onset of a nice rally, although technically it may be too early to get bullish as so far the previous high at 1.1450 still remains intact. Once we have a higher high then that would be the end of the bearish trend technically speaking. Meanwhile if the selling pressure resumes then the next short-term support is at 1.1260, while the major support below 1.1200 comes in at around the 1.1080/5 level. 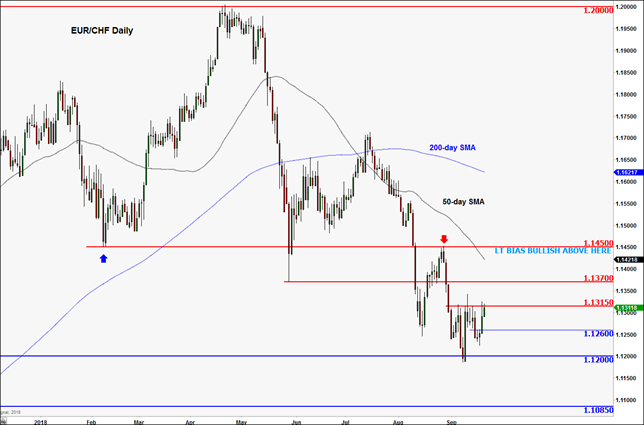