EUR/CHF set for breakout as focus turns to ECB

It is all about whether the ECB will follow other central banks in signalling a 50-basis point hike, or a more standard 25 for July.

All euro pairs will be in sharp focus on Thursday when the European Central Bank decides what kind of a hike to prepare the markets for in July. No one is expecting any hikes on Thursday, and the ECB wouldn’t want to cause any unwanted appreciation of the single currency by making a surprise decision. However, their forward guidance regarding rate hikes from July and onwards should move the euro regardless. It is all about whether the ECB will follow other central banks in signalling a 50-basis point hike, or a more standard 25. If we hear hints that it will be the former, I would expect to see a sharp rally in the EUR/USD, EUR/CHF and other euro crosses.

Inflation at a record high

Although there are no signs of an overheating economy – quite the opposite, in fact – inflation is the problem, which is what is forcing the ECB to take action. CPI inflation rose to a fresh record of 8.1% in May, accelerating from 7.4% in April and well above expectations of 7.8%. Inflation has gotten very hot, with the war in Ukraine exacerbating rising food and energy costs.

But surprisingly, the Eurozone economy grew much stronger than initially estimated in the first quarter. According to revised figures from Eurostat, the eurozone expanded by 0.6% in Q1 rather than 0.3% initially estimated. That said, German data releases throughout the second quarter has been dire. Industrial production at the economic powerhouse missed expectations, printing +0.7% m/m vs. +1.3% eyed.

Nonetheless, money markets have been betting that the ECB will pursue a more aggressive hiking cycle. Following Tuesday’s surprisingly strong GDP data, they are now expecting 200 basis points worth of ECB rate hikes by May 2023, mirroring hawkish sentiment from ECB members over the last month.  Some members have been talking about raising rates by 50bps, which is something that could be confirmed on Thursday.

So, watch the euro closely today, especially against currencies where the central bank is still considered to be less hawkish than the ECB. The likes of the EUR/JPY and EUR/CHF come to mind.

The EUR/CHF has been printing higher lows ever since creating a bottom around parity back in March. Its initial rally to 1.05 handle from there was rejected in early-to-mid May, when the sellers successfully defended the 200-day moving average on a couple of occasions, which led to an eventual drop to 1.0230. However, the bulls kept buying the dips as the ECB grew ever more hawkish as inflation in the eurozone rose to new records.

The EUR/CHF is once again finds itself at around that 1.05 handle ahead of the ECB’s rate decision on Thursday. Great timing, traders! Will we see rates break though 1.05 handle on this occasion, or will the ECB somehow manage to shoot down the euro? 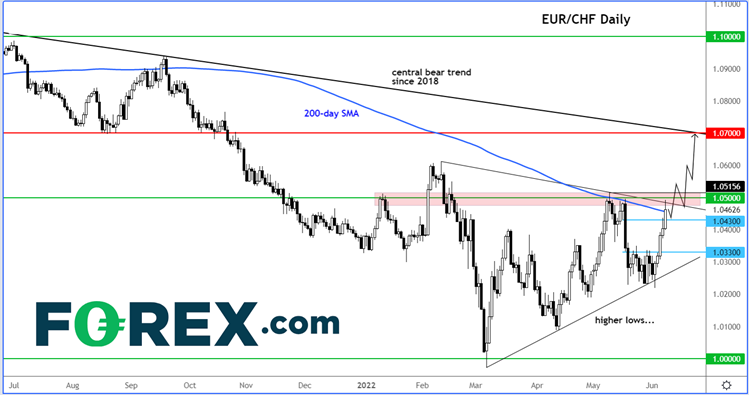 I reckon the ECB will be quite hawkish this time and ass a result, trigger a euro rally. This could see the EUR/CHF break that 1.05 resistance and head towards the long-term bearish trend line around 1.07 initially, possibly ahead of more gains in subsequent days.

On the downside, the first line of support comes in around 1.0430. A potential break below here could see rates drop to the next key support area of 1.0330, which is the base of the last breakout.