EUR/GBP: Brexit and BOE and Bears, Oh My!

Friday’s UK PMI report has the potential to tip the scales and lead to an explosive move in the pound...

In the wake of a solid UK jobs report yesterday (claimants rose just 14.9k, unemployment steady at 3.8% and average hourly earnings +3.2% annualized) and a better-than-expected CBI Industrial Orders report this morning, the British pound is the day’s strongest major currency.

Of course, for businesses and households, these month-to-month economic reports pale in comparison to the longer-term significance of Brexit, which will be made official at the end of next week. But traders are always forward-looking, the (slight) clarity around the UK’s relationship with the rest of the world is an improvement over the last couple of years debating the prospects, timeline, and form of Brexit. In other words, the UK’s official departure from the European Union next week has already been “priced in” to the market.

While the final shape of the UK’s international trade relationships will obviously have a long-term impact on the pound and UK stocks, the market’s short-term focus has shifted to next week’s Bank of England meeting. So far this week, the market-implied odds an interest rate cut by the BOE have fallen from near 70% to closer to 50%, explaining sterling’s big rally against its major rivals.

With traders essentially evenly split on the BOE’s immediate plans, Friday’s UK PMI report has the potential to tip the scales and lead to an explosive move in the pound. If both the Manufacturing (expected at 48.8 following a 47.5 reading last month) and Services report (expected at 51.1 after a 50.0 print last month) beat expectations, traders could push back any expectation of a BOE rate cut, and the pound could rally sharply. Meanwhile, weak readings on the two reports could essentially cement a BOE rate cut next week, and the pound could in turn unwind this week’s big rally.

When it comes to EUR/GBP, rates have broken down from the tight 0.8460-0.8580 consolidation range and have fallen to test their lowest levels of the year to date near 0.8440. From a technical perspective, there’s potential for more downside toward 0.8400 or even 0.8300 if Friday’s PMI report beats expectations and the BOE refrains from cutting rates. 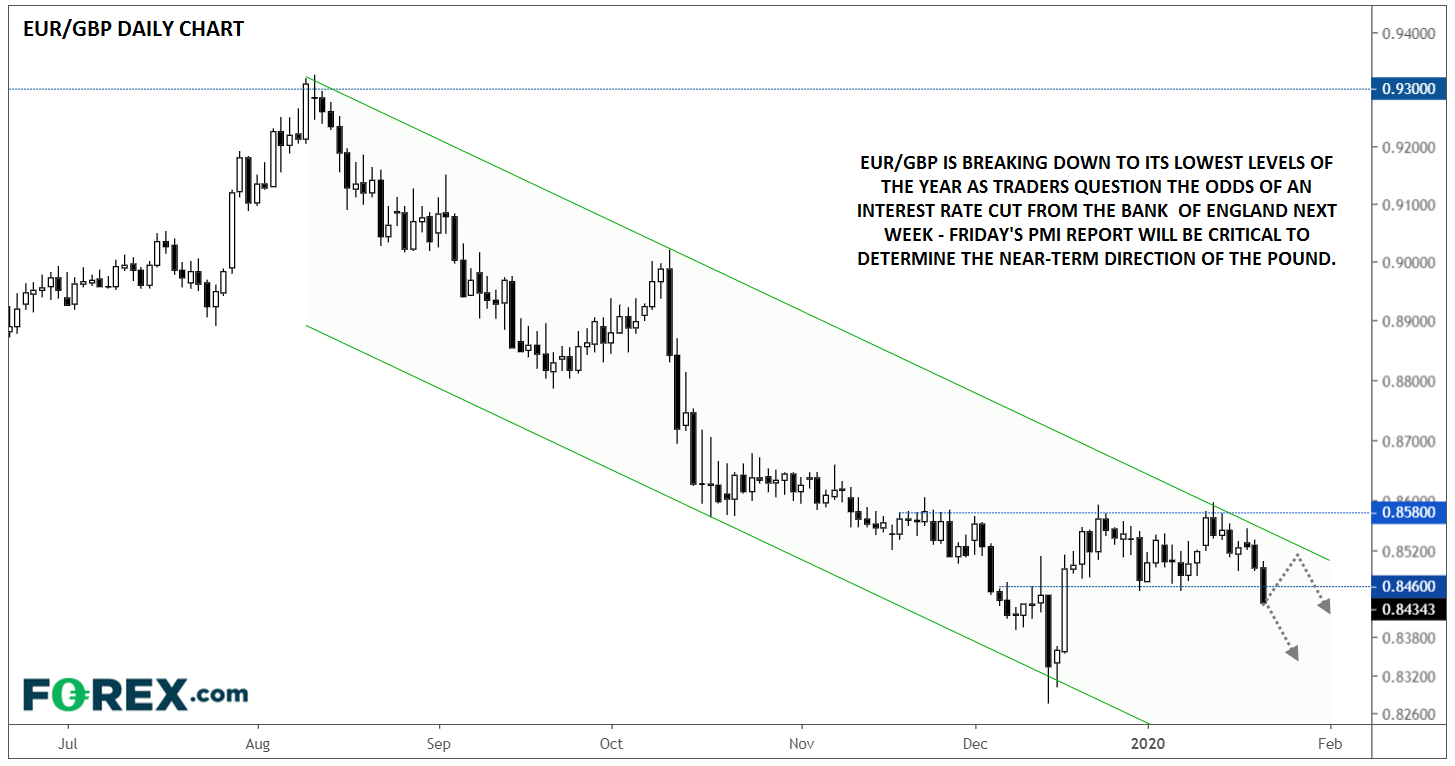 Given the longer-term bearish structure, the trade on a weak-PMI-BOE-cuts-rates scenario is a bit trickier, though traders could consider selling bounces back toward the mid-0.8500s early next week as a chance to join the established downtrend at a more favorable price in anticipation of a sell-the-rumor-buy-the-news reaction to a BOE rate cut next week.