EUR/GBP could drop to 0.80 as focus turns to European politics

This morning’s much stronger-than-expected industrial data from the UK suggests economic activity maintained a significant amount of momentum at the end of last year. But there wasn’t much of a response from the pound. But as the political focus shifts away from the UK and towards Europe – with elections taking place this year in France, Germany and the Netherlands – the euro could very well weaken relative to the pound amid rising uncertainty over the whole EU project.

This morning’s much stronger-than-expected industrial data from the UK suggests economic activity maintained a significant amount of momentum at the end of last year. But there wasn’t much of a response from the pound. If anything, the pound, after an initial bounce, actually weakened a couple of hours after the data was released. The markets are forward-looking and investors will likely pay more attention to up-to-date data next week. The latest measures of consumer inflation, earnings, employment and retail sales will all be released between Tuesday and Friday. If these figures imply that growth has been maintained at the start of this year, then the pound may stage a more meaningful comeback, especially against the euro. In fact, the EUR/GBP may well have already topped out when it failed to hold its own above 0.90 following the Brexit vote. Now at around 0.85, it is lacking clear direction. But as the political focus shifts away from the UK and towards Europe – with elections taking place this year in France, Germany and the Netherlands – the euro could very well weaken relative to the pound amid rising uncertainty over the whole EU project.

Today’s release of UK data suggests economic activity maintained a significant amount of momentum at the end of last year. December’s unexpected 1.8% rise in industrial output was fuelled by manufacturing production, which rose by a much larger-than-expected 2.1% month-over-month. Construction output rose sharply too, up 1.8% on the month. These figures should cause an upward revision in Q4 GDP, which was initially estimated at 0.6% by the ONS. However industrial and construction sectors make very little contribution to UK GDP. So the expected revision, due on the 23rd February, is likely to be small. Nevertheless, macro data since the Brexit vote has remained resilient despite an uncertain economic outlook. If the more up-to-date data next week imply that growth has been maintained at the start of this year, then the pound may stage a more meaningful comeback, especially against the euro. The latest measures of consumer inflation, earnings, employment and retail sales will all be released between Tuesday and Friday. We will also have GDP data from Germany and the Eurozone on Tuesday to consider, too.

Political uncertainty in Europe could weigh on EUR/GBP

With the European Central Bank recently reiterating its dovish stance despite improvement in Eurozone data and the Bank of England sounding a little bit less dovish than before, the EUR/GBP could very well weaken going forward, especially as the political focus also shifts slightly away from the UK and more towards mainland Europe. The key theme in the Western political landscape over the past several years has been a rise in radical right-wing politics. In Europe, the UK has already opted to leave the European Union and now there is a danger that others might join them, too. Indeed, the political focus is towards mainland Europe with elections in France, Germany and Netherlands all coming up this year. Concerns over France leaving the Union is the biggest threat, with Marine le Pen’s National Front party gaining popularity. These concerns may keep a lid on the euro, even if we see further improvement in Eurozone data.

But timing these fundamental factors when it comes to trading is very difficult, if not impossible. Luckily, this is where technical analysis comes handy. Apart from the fact that the EUR/GBP was unable to hold above 0.90 and the subsequent breakdown of support at 0.8850-60 which later turned into resistance, we don’t have a lot of other long-term bearish things to say about the cross. Indeed, the long-term trend line is still in place and price is still holding its own above the rising 200-day moving average. Nevertheless, because of the above fundamental reasons, we are of the view that the EUR/GBP is probably heading lower in the coming weeks and months. We will maintain this view so long as the EUR/GBP remains inside the bearish channel, which means therefore that even if price rises to the top of this channel at around 0.87, the medium term bearish view would still remain valid. We think that at this stage it is more likely for the EUR/GBP to drop to 0.80 than to revisit 0.90 again.

But even in the short-term outlook there is a strong possibility that the EUR/GBP will not be able to rise all the way to the top of the bearish channel given the recent weakness in price action. Indeed, today’s bounce towards the top of its short-term range at 0.8550 may well mark the high for today’s session, before we potentially see further weakness in the days and possibly weeks to come. On the downside, the key level that needs to break down is at 0.85. Once this condition is settled then the EUR/GBP could head towards some of the support levels shown on the chart (in blue) with the shaded region around 0.8305-35 being the immediate bearish objective. 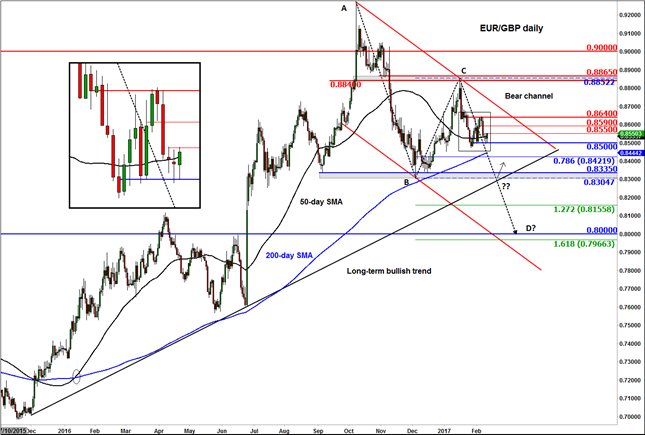