The euro and pound have both been among the weakest of G10 currencies so far this year, held back by persistent political uncertainties in the UK and Italy, among other places.

The euro and pound have both been among the weakest of G10 currencies so far this year, held back by persistent political uncertainties in the UK and Italy, among other places. These concerns were once again at the forefront of investors’ minds today with the EUR/USD once again failing to hold above that pivotal 1.1530 level while the GBP/USD has dropped below 1.300 to a low so far of around 1.2960 as there is still no end in sight in the stalemate on a Brexit backstop deal.

Against each other, the euro has performed better against the pound over the past two weeks or so, thanks to the lack of progress on the issue of Brexit and last week’s soft UK inflation data. However, despite this, the EUR/GBP is still currently down on the year. The Bank of England still looks poised to raise interest rates this year, while there is a possibility that the ECB may provide a more dovish assessment of the Eurozone economy and inflation come Thursday.

Meanwhile from a technical point of views, the trend is still lower for the Chunnel given the lower highs and lower lows. In fact, the EUR/GBP could be about to turn lower again, now that it has arrived at a major resistance area around 0.8850-0.8890.

As can be seen on the chart, this area was formerly support, with the top of this range corresponding with the opening price level for the year. Thus, there is a real possibility that rates may turn lower again from here.

But bearish speculators would now love to see evidence that resistance is holding here. Therefore if we get a nice rejection here then there should be further technical follow-up selling pressure to come in the days ahead.

However, if the EUR/GBP goes on to break through that 0.8850-0.8890 area then this would turn the yearly candle green again. As such, we would have to drop our bearish bias on it. The line in in the sand is the most recent high near 0.8920. Any move back above this level would be a bullish development in our view. 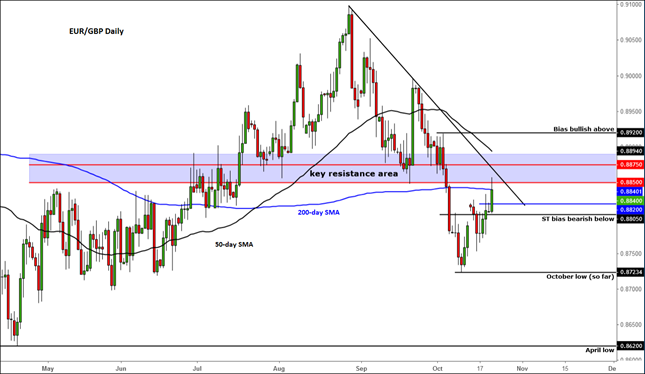