This was on the back of official data showing UK wage growth had reached its highest level since the financial crisis in the three months to August.

The pound extended its gains this morning with the GBP/USD climbing to 1.3200 and EUR/GBP slipping 35 pips back below the 0.8800 handle. This was on the back of official data showing UK wage growth had reached its highest level since the financial crisis in the three months to August. Sterling’s gains were limited, however, as investors kept a close eye on the latest Brexit-related developments - or lack thereof - and amid profit-taking ahead of tomorrow’s publication of UK consumer inflation data.

Earnings climb at fastest pace since 2009

According to the ONS, the Average Earnings Index excluding bonuses rose to 3.1% year-over-year in the three months to August. This compared favourably to 2.9% both expected and recorded in the previous month. It also marks the fastest rate of annual growth in wages since 2009. Including bonuses, earnings were 2.7% compared to expectations and previous reading of 2.6%. Meanwhile, the unemployment rate remained unchanged at 4.0% during the same three month period, as expected. Though unemployment fell by 47,000 and employment remained at a near-record high, the number of “inactive people” rose sharply by 103,000.

UK CPI expected to have eased in September

The ONS will publish the latest Consumer Price Index (CPI) measure of inflation tomorrow morning. Economists expect headline CPI to have eased to 2.6% year-over-year in September from 2.7% previously. If correct, this would point to a sizeable pickup in real wages given today’s earnings figures. Meanwhile core CPI is expected to have eased to 2.0% last month from 2.1% in August.

While today’s data from the UK was good, the same can’t be said about Germany. Import prices in the Eurozone’s economic powerhouse was flat in August compared to a small increase expected. Meanwhile the closely-followed ZEW Economic Sentiment, which is a survey of about 275 German institutional investors and analysts which asks respondents to rate the economic outlook for the Eurozone, fell sharply to -24.7 and is now below the zero level for the seventh consecutive month. A reading above 0.0 indicates optimism, below is pessimism. The pessimism rose in other words given that the prior reading was ‘only’ -10.6. This pessimism is in large part because of intensifying trade dispute between the US and China which is having a negative impact on German exports.

The outcome of the ZEW survey weighed on the EUR/USD as it slipped back to 1.1570 and further pressurised the EUR/GBP, which had earlier been hit by the strong UK wages data.

As mentioned, the EUR/GBP fell back below the 0.88 handle following the publication of today’s UK wages data, after it had staged a counter-trend move in the last two days of last week. Prior to that rebound, the Chunnel had established itself a clear bearish trend as it made a series of lower lows and lower highs since topping out at just below the 0.91 handle at the end of August. Today’s weakness could therefore mark the resumption of that bearish trend. However, it is possible – although not ideal for the bears – for rates to climb to the key 0.8835-0.8875 resistance area (old support) before heading lower again. So, even if rates were to push a little higher from here it would still not change the bearish trend, unless we go above the most recent high around 0.8920 for then price would have made a higher high. But we may not get that pullback as it looks like the rebound has failed when price couldn’t hold above last week’s high at 0.8807. With the liquidity pool above last week’s high taken out, the EUR/GBP may now head below last week’s low at 0.8723 and test liquidity there. And should the downward trend continue further then the subsequent bearish objective is at just below 0.8620, which was the low hit back in April. 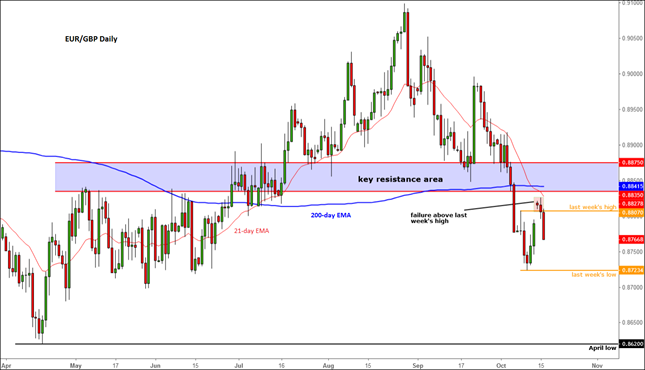