Equities have stabilised this week and this has allowed the EUR/JPY to climb higher. If sentiment improves further, then we could see a break of the 129 handle soon.

The euro has been hit hard recently due in part to weakness in Eurozone data thanks to soft demand from emerging markets and as the slump in oil prices has eased inflationary pressures. Despite this, the European Central Bank is determined to finish its QE programme at the end of this year and still expects to raise interest rates after the summer of 2019. For that reason, there is a chance that the oversold euro could be about to stage a rebound. If it does, its best chance for a comeback would be against currencies where the central bank is still dovish, such as the Japanese yen. In theory, the EUR/JPY ‘should’ rise over time as the divergence between Eurozone and Japanese monetary policies grow. However, the EUR/JPY is also a risk-sensitive currency pair, with the yen being a safe haven currency. So, it is vulnerable to the volatility in the stock markets. That being said, equities have stabilised this week and this has allowed the EUR/JPY to climb higher. If sentiment improves further, then we could see a break of the 129 handle soon.

EUR/JPY breakout looming, but in which direction?

From a technical point of view, the range in the EUR/JPY has been narrowing with the bulk of price action over the past two weeks or so being between 128.00 and 129.00. Soon, it will break out of this range and could potentially move sharply in the direction of the breakout. The repeated failure around the 129.00 handle on the one hand means that this is a strong resistance area. On the other hand, the EUR/JPY’s refusal to go lower suggests a sharp short-squeeze rally could be on the cards with the cluster of the buy stop orders above the 129 handle being the fuel for that potential rally. In this potential scenario, an immediate bullish objective would be 129.40, the low from the inverted hammer at the top of the recent range. But potentially, rates could go a lot higher over time, given the fact that the eurozone and Japanese monetary policies have started to go their separate ways. Conversely, if the 128 level breaks down then trend-followers might re-emerge again and drive price towards the October low at 126.65 or even the May low below the 125 handle. 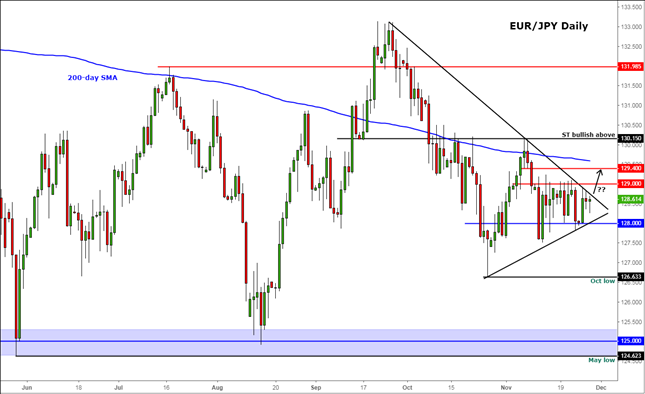