The EUR/JPY should remain supported on the dips, keeping that path of least resistance to the upside.

The FX markets continue to dislike the Japanese yen after the Bank of Japan decided against ending its Yield Curve Control at its last policy setting, and thus remained the most dovish major central bank. In contrast, all other major banks have turned hawkish amid high inflation across the globe. Even the European Central Bank is set to raise interest rates for the first time in over a decade. Speaking of, attention has turned to ECB’s Sintra forum. The introductory speech and press conference were delivered by the ECB’s President Christine Lagarde earlier. Fed’s Powell and BoE’s Bailey are set to speak tomorrow. FX markets will be listening to clues about any subtle changes in the outlook for interest rates.

Lagarde’s speech this morning was mostly a re-iteration of what she had communicated in the ECB’s press conference earlier in the month.

She said that the ECB intends to raise rates by 25 bps in July and there is optionality to raise by more in September, adding that if the inflation outlook does not improve, the ECB could move faster. A “gradual but sustained” path of further rate increases will be appropriate beyond September. Meanwhile, regarding fragmentation, Lagarde said the ECB will use flexibility in reinvesting redemptions coming due under PEPP, and that the new instrument to deal with fragmentation will allow rates to "rise as far as necessary."

The ECB’s promise of a larger increment hike should the inflation outlook does not improve means the divergence in interest rates between the Eurozone and Japan will have grown larger by the end of the summer. This should see the EUR/JPY remain supported on the dips, keeping that path of least resistance to the upside.

From here, the EUR/JPY looks set to break to a new high for the year, having previously encountered some resistance around 144.25 area on at least a couple of occasions. But those “double top” highs appear to be a bear trap and soon I am expecting rates to surge through them. Key short-term support now comes in at 143.50ish, near Monday’s high. 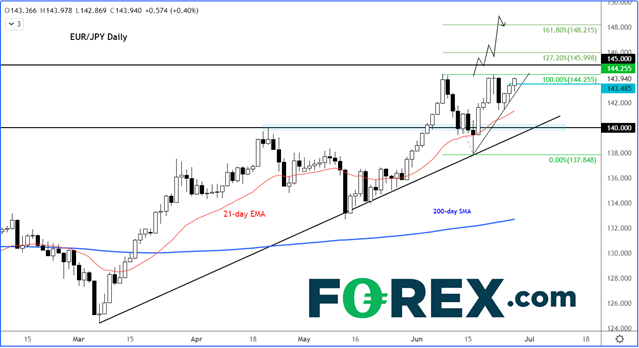