The single currency is also holding its own relatively well against the commodity currencies, non-more so than the New Zealand dollar.

As mentioned in my earlier report, it is not just the dollar which has fallen against the euro today. The EUR/GBP, for example, has hit a new high on the year as the pound remains under pressure owing to concerns over a no-deal Brexit outcome. The single currency is also holding its own relatively well against the commodity currencies, non-more so than the New Zealand dollar. In fact, the EUR/NZD could sharply extend its gains this week if the EUR/USD moves back north of that long-term 1.16 pivotal level and trigger a short squeeze rally. Also, the RBNZ may undermine the kiwi if it were to deliver a more dovish policy statement than the market expects later on in the week. But if at least one of these conditions are not met then there is always the risk of a breakdown. One way or another, the EUR/NZD’s month-long consolidation a triangle pattern is about to complete, so price will break in one or the other direction soon. Overall, though, the chart of the EUR/NZD is painting a bullish picture, so we would favour a bullish breakout than a breakdown. Among the bullish indications, the first thing we would point out is the v-shaped recovery following the sell-off in May earlier this year. The fact that price went to break above the May high means that all those who sold were proven wrong. What’s more, price is now not showing any follow-through to the downside despite the formation of several bearish-looking price candles inside its current consolidation range. Several inverted hammer patterns and a bearish engulfing candle were formed over the past several days. Yet, the EUR/NZD has been reluctant to go down. The bulls must still be in control, therefore. The longer-term outlook is equally bullish as one can judge for example by the slope and position of the 21-, 50- and 200-day moving averages. These averages all have positive slopes and price is holding in the sweet spot above the 21-day exponential average for the time being. With the base of the triangle pattern coming in around 1.7125, for as long as price holds this level then the path of least resistance would remain to the upside. Only a clean break below this level would be a bearish outcome as things stand. 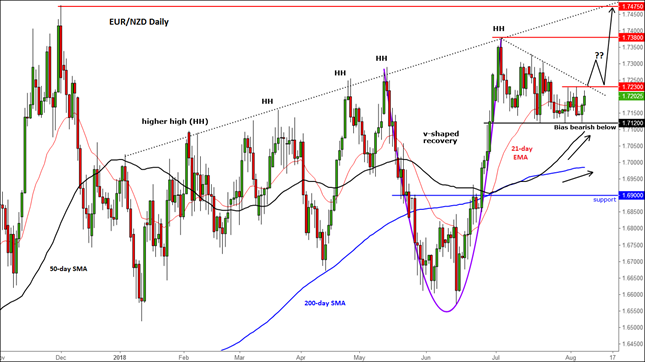