There has been further follow-through in euro selling on the back of today's publication of disappointing manufacturing and services sector surveys from the Eurozone, underscoring the ECB President Mario Draghi’s "increasing caution" outlook on the economy and highlight euro's vulnerability.

Yesterday’s slightly more dovish ECB statement and press conference saw the euro fall. And there has been further follow-through on the back of today's publication of disappointing manufacturing and services sector surveys from the Eurozone, underscoring the ECB President Mario Draghi’s "increasing caution" outlook on the economy and highlight euro's vulnerability. Bizarrely, though, ECB's Nowotny has stated today that risks to growth are “broadly balanced,” despite the recent sell-off in equity markets suggesting otherwise. In fact, the ECB said in its policy statement just yesterday that the “balance of risks [to the growth outlook] is moving to the downside owing to the persistence of uncertainties related to geopolitical factors, the threat of protectionism, vulnerabilities in emerging markets and financial market volatility.” So, judging by that and today’s disappointing Eurozone data, you do have to wonder how Mr Nowotny could justify his assessment.

Today’s economic surveys from the eurozone have helped to compound fears over the health of the Eurozone economy. According to Markit’s Purchasing Managers' Indices (PMIs), France’s private sector fell into contraction for the first time since 2016. The nation’s manufacturing PMI printed 49.7, down from 50.8 recorded in November, while its services sector PMI performed even worse, plunging to 49.6 from 55.1 the month before. This was the first time in two and a half years that economic activity in France has contracted, with a series of protests hitting business confidence. The situation in Germany wasn’t too great either. The nation’s manufacturing PMI slipped to 51.5, a 33-month low, from 51.8 previously, while the services sector gauge also weakened slightly. Unsurprisingly, the weakness was reflected across the eurozone, whose composite index dropped to 51.3 from 52.7 in November as both manufacturing and services growth slowed down. All of today’s PMIs were below analysts’ expectations.

EUR/JPY in lower half of range, looking heavy

With the euro falling on weak data and Japanese yen hanging around amid ongoing volatility in the stock markets and ahead of the Bank of Japan’s policy decision next week, the EUR/JPY is again finding itself in the lower half of the tight range it has been stuck inside for several weeks. In light of the above developments, could we now see a breakdown? A potential break below the trend line around the 128.00 support level could see rates break below the November low at 127.50. If there’s acceptance below this level then the liquidity below the October low at 126.60 would become the next bearish target, potentially followed by the May low at 124.60 next. However, all bearish bets would be off if the EUR/JPY rallies now and goes above the most recent short-term high at 130.15. Short-term potential resistance levels come in at 128.70, 129.00 and 129.40, levels that were formerly support and/or resistance. 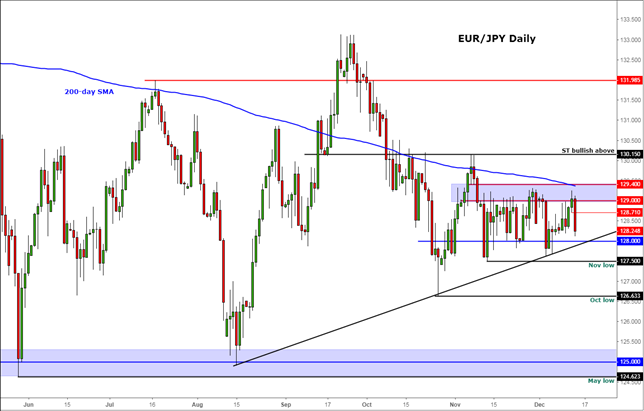