Nothing has changed fundamentally to suggest the markets have bottomed out

We saw a late bounce in US and European futures on Friday and that momentum has carried forward to today’s session. It has “short-covering” written all over it. Nothing has changed fundamentally to suggest the markets have bottomed out. It is a quiet day with the US out and economic calendar light. So, anything we see today in terms of potential market strength should be taken with a pinch of salt, especially in light of further weakness we saw in European data today. The threats of dwindling economic growth and stubborn inflation should keep risk assets undermined.

European bond yields have bounced back after a two-week sell-off. They sold off sharply last week as investors piled back into government debt and out of equities and high-beta foreign currencies. The move was triggered by growth concerns replacing or, more appropriately, adding to soaring inflation fears. Investors figured central banks will have to stop hiking rates sooner than later, as inflation will likely peak with economic activity weakening so sharply amid soaring price levels.

Bond markets basically signalled that the Fed is going to be done with rate hikes sooner than expected, which also helps explain why equity prices have gotten a bit of a lift off their lows.

That being said, I don’t necessarily expect yields to head sharply lower from here. I don’t think central banks will be done with rate hikes any time soon, not until inflation comes down a lot and stabilises. 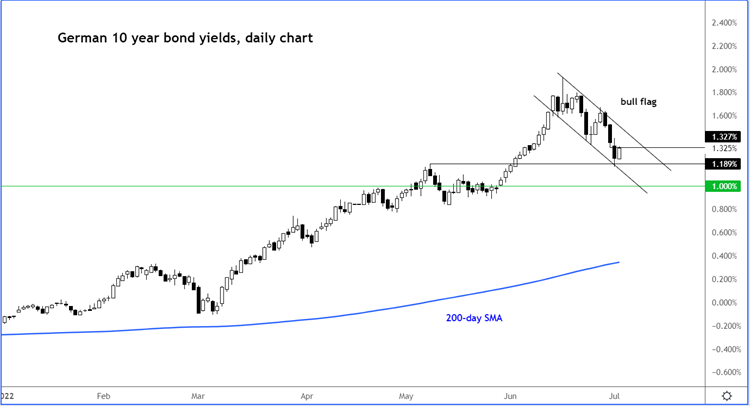 In fact, the situation in Europe continues to deteriorate. Investor sentiment turned even more negative, according to Sentix’s latest survey of about 2,800 investors and analysts, asking respondents to rate the relative 6-month economic outlook for the Eurozone. The index for Eurozone slumped to -26.4 in July compared to -15.8 in June, worse than -20.0 expected. For Germany, the Sentix expectations index dropped to an all-time low of -34.8 points.

The confidence news follows a string of poor economic data, with indicators consumer and business and sentiment also dropping alarmingly.

This morning we learned that Germany reported its first monthly trade deficit since 1991. This is a shocking piece of news for such an export-oriented country. Surging prices of imports obviously had the biggest impact, with energy, food and parts used by manufacturers rising by more than 30% in May compared to a year ago. But it also points to weak demand from abroad, which is hardly a surprise given how much the economic outlook has deteriorated in recent months. 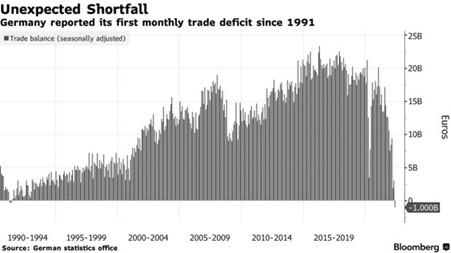 Given the above week data, German stocks could fall further. I reckon the DAX is highly likely to drop to a new low for the year beneath its March low at 12431: 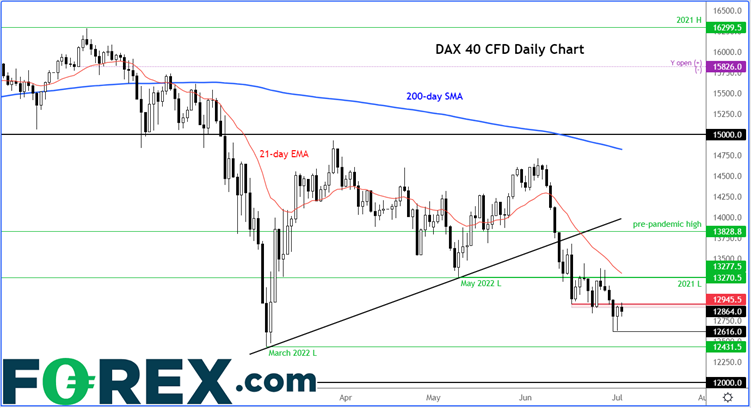 Looking ahead to the rest of the week

There are a few macro events to keep a close eye on as now enter the first full week of July and third quarter.

The Reserve Bank of Australia meets on Tuesday. It is expected to hike interest rates by 50 basis points to 1.35% from 0.85% as it battles high inflation, like all other central banks. At its last two meetings, the RBA surprised the markets by hiking more than expected. Will it deliver another surprise? Actually, it might not, as the RBA governor explicitly said that it will either be 25 or 50 bps. The AUD could sink further in any event, should growth concerns intensify.

The FOMC’s meeting minutes will be in sharp focus on Wednesday as investors try and figure out exactly how hawkish each member is and how do they see interest rates evolving in the months ahead.

On Friday, the US monthly nonfarm jobs report will put the dollar and gold into focus. The NFP is becoming less and less relevant for the markets as the focus has turned to inflation and economic growth than employment. Thus, the only thing that will matter from the jobs report is the wages bit. Workers will be demanding higher pay to keep up with inflation. Watch average earnings for upside surprises.