The first day of the new month is underway and it is a good one for risk sensitive assets, with European stock indices finally catching a bid. This may be due to the fact the EUR/USD rally is taking a small breather, as the US currency finds short covering support. The USD/JPY has recovered from overnight weakness to turn positive, while the AUD/USD was hitting new session lows at the time of this writing after the RBA refused to turn hawkish overnight despite improvement in Aussie data and recovery in base metal prices.

The first day of the new month is underway and it is a good one for risk sensitive assets, with European stock indices finally catching a bid. This may be due to the fact the EUR/USD rally is taking a small breather, as the US currency finds short covering support.  The USD/JPY has recovered from overnight weakness to turn positive, while the AUD/USD was hitting new session lows at the time of this writing after the RBA refused to turn hawkish overnight despite improvement in Aussie data and recovery in base metal prices.

With European stocks massively underperforming their US counter parts in recent weeks, they could be due a stronger recovery in the event the single currency goes into consolidation or ideally reverses completely (which is possible of course but unlikely in our view). The recent sharp rally in the euro was seen as negative for European stocks due to its negative impact on exports. But with the European Central Bank’s QE programme still being at full throttle and interest rates being universally low, one could argue that the European stock markets could be undervalued given how well shares on Wall Street have performed since QE in the US was tapered and subsequently removed. What’s more, the past sharp rises in the dollar failed to halt the rally on Wall Street. Although it may be different for European markets, it is worth remembering that much of Germany’s exports are to within the Eurozone itself. Thus, a strengthening currency would not impact exports within the Eurozone, ceteris paribus.  So, while I acknowledge that the single currency’s strength has been detrimental to European stocks, the markets have over reacted a little.

But despite today’s notable rebound, we haven’t seen strong enough evidence that the buyers are well and truly back for European stocks. Indeed, this could just turn out to be a mere oversold bounce. But the early signs are encouraging nonetheless. The German DAX index, for example, has now filled the gap that it had left behind back in April in its rally en route to new all-time highs. The last ATH was achieved on June 20, at 12951.5. From this level, the DAX has dropped 850 points or 6.6% to today’s earlier low. This is a significant drop but definitely not in the official bear territory of 20% correction. So, for now, we can only assume that this pullback is a normal retracement in what still is a bullish trend, as highlighted for example by the still-rising 200-day moving average (which sits below market at 11854). But as mentioned, we haven’t seen any solid evidence that the buyers are back. If the DAX were to break some further resistance levels in the days to come then that could be the confirmation needed. We would turn decidedly bullish in the event the DAX breaks and holds above 12390, which was not only previously support, but was the previous all-time high, hit back in 2015. Even a break above the recent range high at 12210 would be considered bullish.

At this stage, we are not bearish on the DAX any longer as we are expecting the buyers to return now that the gap has been filled and given the still positive fundamentals. However, a potential break below the last swing low at 11941 would create a lower low. In this event, we would have no choice but to turn bearish again. 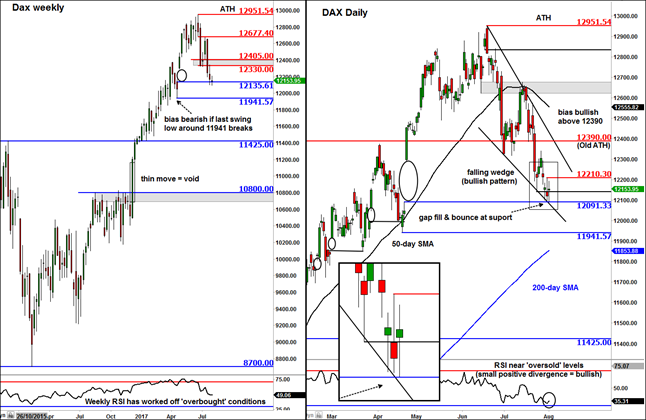